Find out about the top ag-tech companies working to ensure the health and wellbeing of trees.
By Naama Barak January 16, 2022
Facebook
Twitter
Linkedin
Email 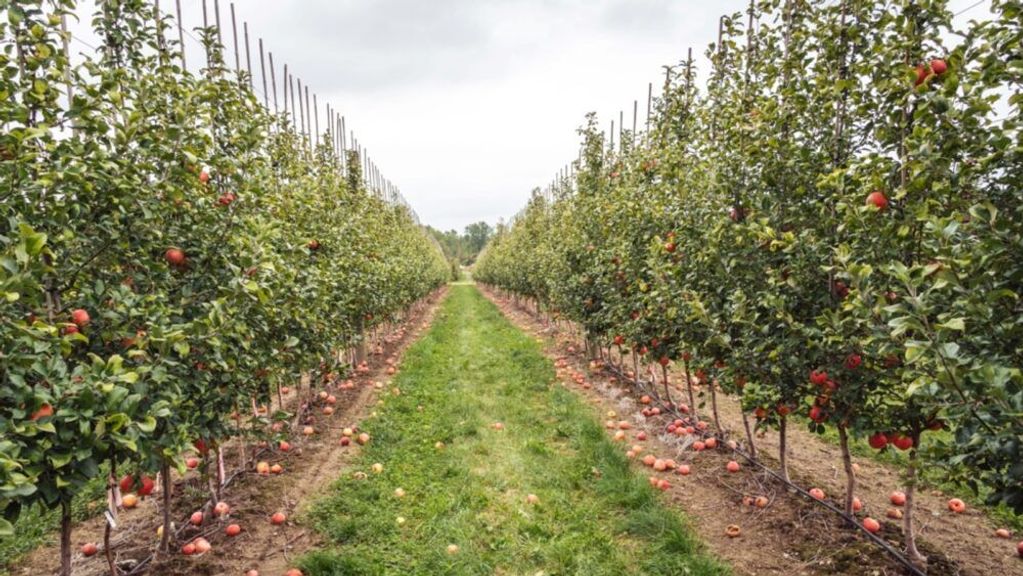 Gene-editing technology can revolutionize the world of perennial crops such as apple and citrus trees. (Matthew Rumph/Unsplash)

Tu B’Shvat, the Jewish New Year for the trees, is a wonderful occasion to celebrate two Israeli fortes: green research and Start-Up Nation.

Therefore, trees, research and tech all form the very roots of this article, highlighting the top technologies that ensure the wellbeing and prosperity of our seedlings, saplings and fully grown green friends.

This year, Tu B’Shvat (the 15th of the Jewish month of Shvat) falls on January 17. Celebrate by sampling some new fruits while you read about these nine innovative ag-tech companies.

SeeTree is perhaps the most Israeli startup in the world, combining as it does military intelligence and that ultimate local symbol, citrus. Founded by a former military intel exec, the company collects and analyzes whole citrus and other orchards using drones, sensors and machine learning, giving growers a “medical record” for each tree. This can allow farmers to prevent devastating disease such as HLB, or citrus greening, as well as to monitor the general wellbeing of their trees and their fruit yield. SeeTree operates out of Tel Aviv, but also has offices near some of its largest markets in California and Brazil.

Fieldin is an Israeli startup that aims to digitize the entire growing process of high-value crops such as almond and olive trees, allowing farmers to stay on top of their work and making farming more sustainable. It does so by attaching sensors to farm equipment such as plows and pesticide sprayers that in turn allow for smart harvesting, smart spraying and smart cultural practices. By getting all the data needed, farmers can address issues such as water usage, carbon emissions and spraying efficacy, leading to healthier trees and more profitable farming.

Fighting Treetop Fire is a startup that does exactly as it says: applied in forest fires, it uses algorithm-controlled laser beams to zap leafy treetops in order to direct the fire back down to the ground and prevent it from rapidly spreading from one tree to the next. The startup was inspired by the massive forest fires that often rage in Israel during summers, leading founder and electro-optics physicist Daniel Leigh to work out how he could contribute to combating the issue.

Israeli startup BetterSeeds is working on genetically changing the architecture of many kinds of low-lying crops to enable mechanized picking using a cutting-edge gene-editing technology called CRISPR-Cas9. But it is also setting its sights on higher ground in the form of perennial crops such as apple and citrus trees, which could be revolutionized to make them less lengthy and risky investments. The gene-editing technology is set to enable trees to quickly mature within the space of a couple of years, increasing the range of trees planted, cutting down risks of disease and making farming more profitable and sustainable.

CarobWay is all about giving the ancient biblical tree, the carob, a tech makeover and bringing it into the 21st century. After creating a huge databank of thousands of trees, the company chose the top 10 to form the basis of cultivation of the ultimate carob tree, seedlings of which were planted across the Hula Valley in northern Israel. The company has promised farmers to purchase the whole yield for 10 years. The seeds will be resold to a European manufacturer of locust bean gum, an important element in food manufacturing, and the rest of the fruit will be turned into advanced products. This way, not only have 170 acres of trees been planted in Israel, but their growth is being carried out in a sustainable, viable way that promises a green future for both them and their farmers.

SupPlant promises to “Help farmers speak better Plant.” It does so in two ways: either by attaching sensors to monitor soil moisture and salinity, leaf temperature and more and combining this weather forecast data, or by using its already existing data from large farms to give similar predictions to smaller, sensor-less farmers unable to shell out on the technology. Either way, it allows farmers to optimize care for their crops in terms of irrigation and freak weather management, ensuring healthy crops, food security and sustainable income even with climate change. SupPlant has customers worldwide, including in the Middle East – it has already worked with Emirati farmers to cut down 50 percent of water usage in palm tree irrigation.

Ever stumbled on an upturned piece of pavement moved out of place by a determined tree root? Then you will appreciate TreeTube, the Israeli startup developing a root structure system that allows trees to peacefully grow their roots firmly underground. The tube-like modular design of the system includes soil, water and a ventilation system, giving the tree all that it needs and directing its roots in an unobtrusive direction. Led by a team of entrepreneurs and landscape architects, it’s already been put in place in Tel Aviv and Europe, creating harmony between mankind and trees once again.

Treetoscope, which recently celebrated its first anniversary, has developed an IoT device that can sense the internal water flow of plants, giving real-time inside information on trees’ water consumption and needs. According to the company, it is the first such commercial device, boasting affordable technology and easy deployment for farmers worldwide. The solution not only aids growers to save water, but it also helps to better manage plant stress, increase resilience and boost fruit quality.

For fruit growers, the enemy is surprisingly small: pesky fruit flies that devastate crops. One solution to the problem is to spray trees but this is not necessarily eco-friendly or, for many growers, economically viable. Step in Biofeed, which has developed fruit-fly lures that use slow fluid release technology to attract and feed or kill the harmful flies. The easy-to-use and reliable suspended devices and traps have already been used to great success by mango growers in India and Togo, saving both tons of fruit and the livelihood of many farmers.

«Previous Post
Shellfish Ships: Antarctic Species Under Threat From Crabs And Barnacles Clinging To Ships»Next Post
VIDEO: Sea Turtle That Expelled Over 10 Different Types Of Plastic Is Returned To Sea