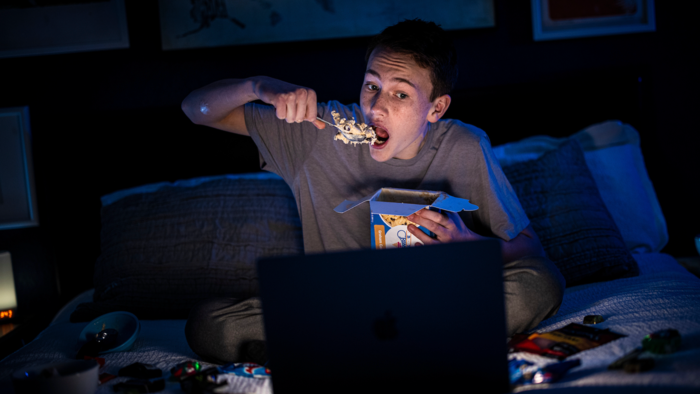 Getting a good night’s sleep is important for everybody but especially so for adolescents, with a new study showing how insufficient sleep leads growing teens to eat more sugar and carbohydrates.

In the era of smartphones, social media and endless online streaming services, a larger number of teenagers are not getting enough pillow time. According to the American Academy of Pediatrics, 73 percent of high school students get less than the recommended eight to 10 hours of nightly sleep. Lack of sleep has long been linked to obesity, behavioral problems and poor mental health as well as inadequate performance at school.

A new study by Brigham Young University in cooperation with Cincinnati Children’s Hospital Medical Center in Ohio concluded that when teens don’t get enough sleep, they are at risk of weight gain and other cardio-metabolic conditions.

“Shortened sleep increases the risk for teens to eat more carbs and added sugars and drink more sugar-sweetened beverages than when they are getting a healthy amount of sleep,” Dr. Kara Duraccio of Brigham Young University said.

She and her fellow researchers believe that when teenagers are tired, they seek quick energy to keep them going until bedtime, therefore the preference for sugary and carbohydrate-rich foods. During short-sleep sessions, teenagers took in 12 extra grams of sugar every day. Because most don’t get enough sleep during the estimated 180 nights in an academic year, 12 extra grams of sugar can result in 4.5 pounds of added sugar each year.

The results were published in the medical journal SLEEP.

“We know that pediatric obesity is an epidemic, and we’ve focused on a lot of interventions to try and address it, but sleep is not one of the things that researchers tend to focus on,” Duraccio said.

“If we are really trying to discover preventative strategies or interventions to increase optimal weight in teens, getting enough and well-timed sleep should be at the forefront of our efforts,” she added.

The issue is complicated by early start times for classes in many school systems, resulting in habitually short and ill-timed sleeping patterns. Duraccio said it is common for many busy people to skimp on sleep when posed with multiple tasks.

“We don’t recognize that getting enough sleep helps you accomplish your to-do list better. Sleep health should be incorporated into all prevention and intervention modules for child obesity,” she said.

In a study published in Sleep Medicine in 2017, American teens were found to trade sleep for time on their electronic devices. Researchers analyzed data from the activities of hundreds of thousands of teenagers and showed that the number who were logging more screen time and losing more sleep rose dramatically between 2009 and 2015. In 2015, more than four of every 10 teens slept less than seven hours each night, an increase of about 17 percent compared to 2009.