Officer repeatedly says “I got you buddy,” as he works to free the juvenile animal.
By Peter Barker January 14, 2022
Facebook
Twitter
Linkedin
Email 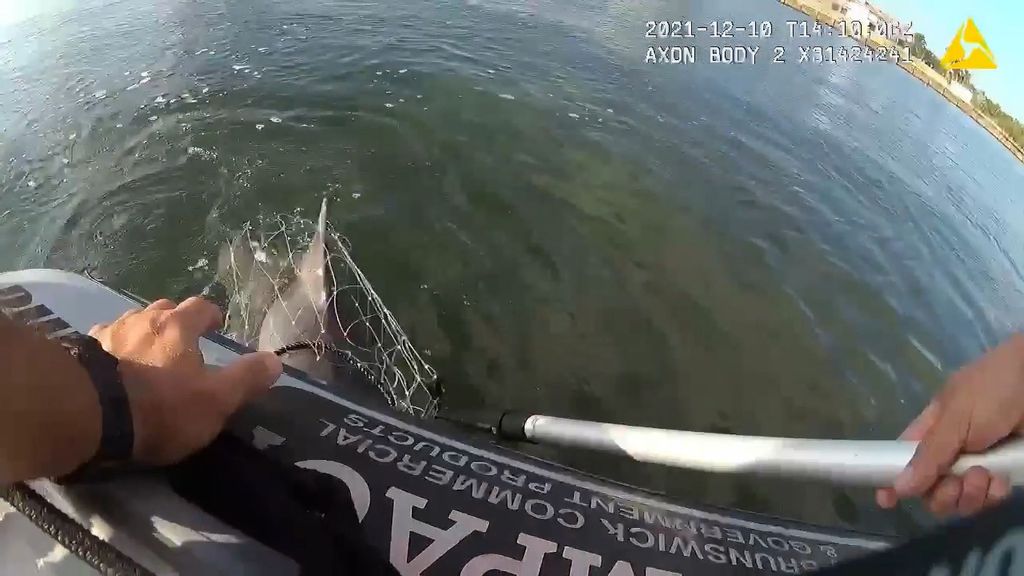 Officer Nelson Silva cuts away at fishing net to rescue a juvenile dolphin in Biscayne Bay off the coast of Miami, Florida, on Dec. 10. (Miami-Dade Police Department/Zenger)

Video posted online by the Miami-Dade Police Department shows an officer rescuing a dolphin in distress that was trapped in a fishing net in December.

“I got you, buddy,” the officer repeatedly says as he works to free the animal in Biscayne Bay off the east coast of South Florida.

Officer Nelson Silva, of the Marine Patrol Unit was alerted to the dolphin in distress on Dec. 10, according to a time stamp on the body-camera video posted in a tweet from the Miami-Dade Police Department.

“Officer Nelson Silva, of our Marine Patrol Unit, received a call of a dolphin in distress in the Shorecrest area,” the Miami-Dade Police Department posted online on Jan. 12 in a message accompanying the video. “Officer Silva located a juvenile dolphin that was trapped in a fishing net.”

Silva tried to untangle the dolphin, but the animal would thrash around, forcing Silva to restart the process over and over again. Eventually, Silva was able to use his knife to cut the dolphin out of the fishing net.

Silva is heard cheering at the end of the video as he holds up the large section of net that had entangled the dolphin.

“Jet skier Nicholas Tuduri was out on the open water with a friend in Biscayne Bay when he noticed a flailing dolphin that got its tail caught in a net,” according to a report by WPTV.  “Afraid of the animal drowning, Tuduri leaped into action, grabbing a knife to cut the dolphin loose.”

After struggling to get a hold of the net, Tuduri cut the animal free from the net.

“This animal was in trouble, and it was in trouble due to human,” Tuduri told WPTV. “It was a very thick, tough, tough nylon rope. It took me almost three minutes straight cutting.”

He said he rescued the mammal in the nick of time.

“If we wouldn’t have intervened, I don’t think the dolphin would have survived a couple of hours,” Tuduri told WPTV.

The Whale and Dolphin Conservation nonprofit says, “Every year, hundreds of thousands of whales and dolphins around the world are accidentally killed in fishing nets and ropes.  Known as ‘bycatch’ this is the biggest cause of harm and death to whales and dolphins today.

“Like us, whales and dolphins breathe air, so when they get tangled up in a net, rope or fishing line it can be a race against time to reach the surface or to escape. In their desperation to escape and avoid suffocation, or in getting tangled in gear, some tear muscles, break teeth, and sheer off fins. The more they struggle, the more entangled they can become.

“Some break free but swim for months with gear wrapped around their bodies, entrapping them and sometimes sawing into their flesh and bones until they die from infections or starvation. Those who escape can be left with painful injuries,” the Whale and Dolphin Conservation states on its website.