VIDEO: Carjacker’s Escape Washed Out After He Stalls On Flooded Road 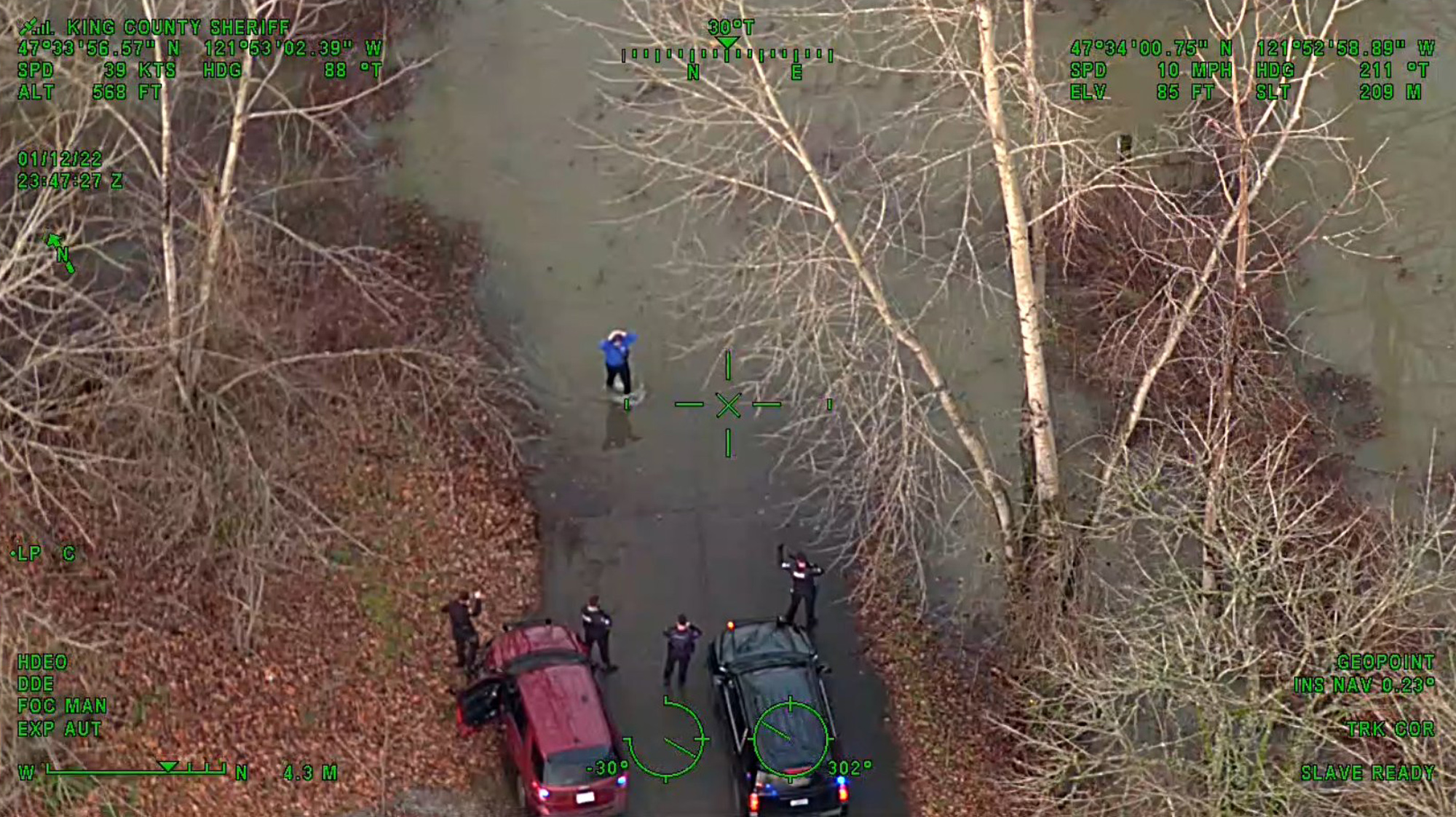 Police in Bellevue, Washington, arrest a carjacking suspect after the car he was driving to flee police got stuck on a flooded road on Jan. 12. (King County Sheriff's Office Air Support/Zenger)

Two carjackers, accused of stealing two cars in separate incidents, were arrested in Washington State on Jan. 12 after one driver of a stolen car got stalled on a flooded road while he was fleeing from police.

“Police were following a stolen vehicle equipped with LoJack,” (a system that uses GPS to locate a user’s vehicles), the King County Sheriff’s Air Support unit posted online along with video. ”The suspects dumped the vehicle in Issaquah in the middle of the road and one of them carjacked another vehicle with officers right behind them.

“The suspect later, unsuccessfully, attempted another carjacking in someone’s garage and continued to try and flee from pursuing officers. The suspect ultimately ran the vehicle into water on a flooded road and was taken into custody,” the Air Support unit said.

The two suspects led police to Bellevue where they ditched that car, carjacked a woman, fought with officers and rammed a patrol car, according to Issaquah police.

One suspect, who also had a felony warrant, was arrested at the scene, police said. They did not say the warrant was for.

The other suspect rushed off in a stolen car, according to Issaquah Police, but later crashed into a flooded river near Fall City Road and Dyke Road. He was detained on the scene without incident.

Neither suspect was identified.

In the video, filmed from a police helicopter, police are seen chasing the suspect through a rural area toward a dead end next to a river.

The helicopter pilot says the suspect is about to “run into a bunch of water.”

The pilot tells the officers on the ground that the driver “just went into some really deep water, it’s covering half the car, I don’t think he’s going to be able to make it too much further.”

The suspect is then seen abandoning the stolen car and wading through the water with his hands up.

He is seen being detained by officers as the video ends.

One Issaquah officer and both suspects were treated for minor injuries. Carjack victims have not reported injuries, according to a report in Texas News Today.

Residents of the area said it was lucky that the incident didn’t happen in fair weather.

“You don’t expect someone to come racing down here,” Mike Bray, who lives near the crash scene, told Fox13 in Seattle. “The dog could get hit, or one of us. It’s lucky it wasn’t summer — there would be hundreds of people milling around. This is a big tubing run, so there are literally hundreds of people in the summer, so this could be really dangerous.