The tortoises, which were born and raised in a breeding center, now live in a remote area near &ZeroWidthSpace;&ZeroWidthSpace;the Sierra Negra volcano. 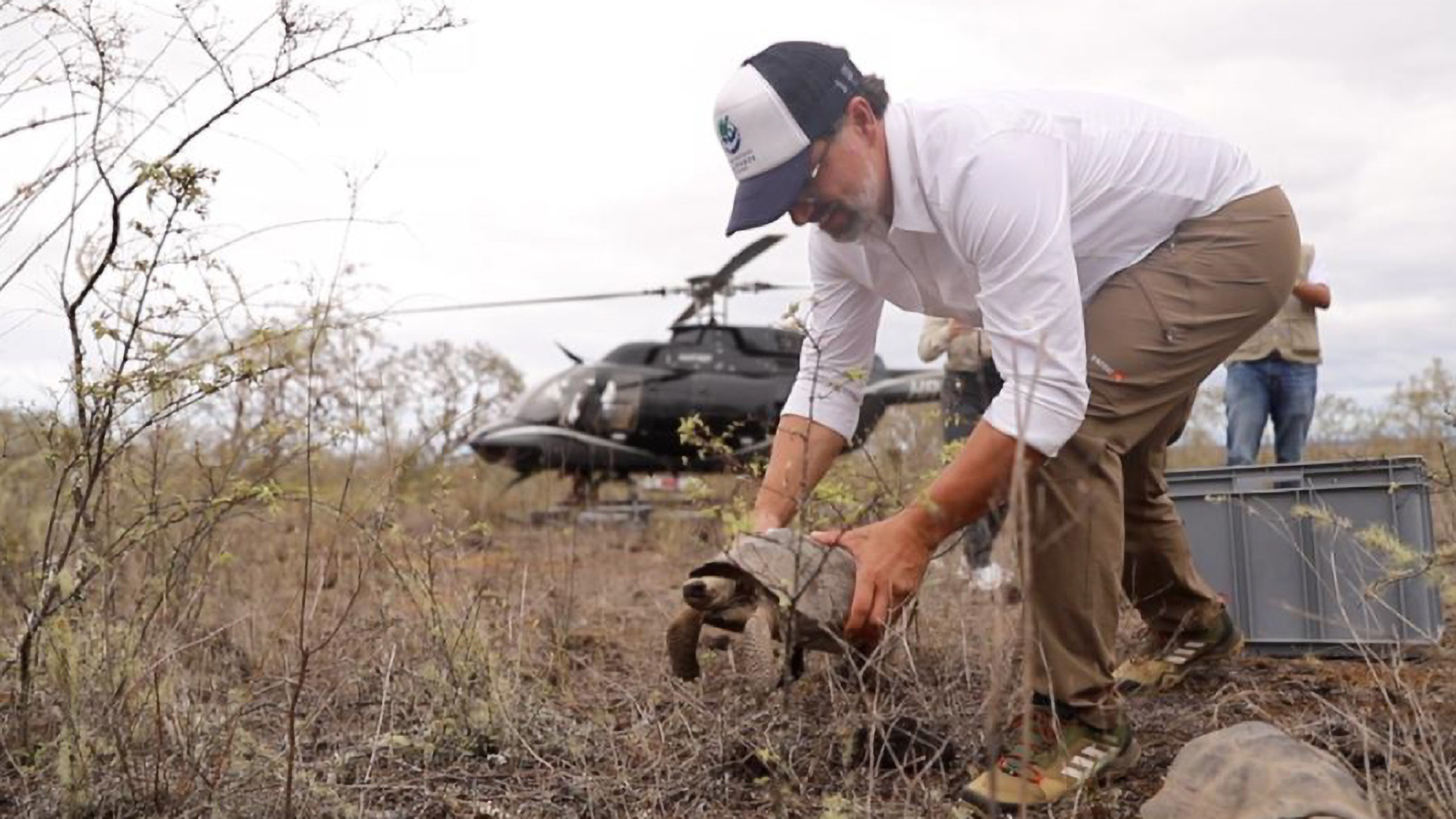 One of the 43 giant tortoises born and raised in the Arnaldo Tupiza breeding center on Isabela Island is released to its natural habitat in an area of ​​the Sierra Negra volcano in the Galápagos Islands. (Gustavo Manrique, Ministry of Environment, Water and Ecological Transition/Zenger)

A group of 43 giant tortoises that were born and raised in a breeding center on Isabela Island, the largest of Ecuador’s Galápagos Islands, were returned this month to their natural habitat in a remote area of &ZeroWidthSpace;&ZeroWidthSpace;the Sierra Negra volcano, conservationists said.

The Sierra Negra giant tortoises were released thanks to coordinated work between the Directorate of the Galápagos National Park and the organization Galápagos Conservancy, according to the website of the Ministry of Environment, Water and Ecological Transition.

The tortoises, between the ages of 5 and 7 years old, had been born and cared for in the Arnaldo Tupiza breeding center.

The tortoises went through a quarantine process, the ministry said. “In addition, blood tests were carried out to ensure that they were in the best of health when they returned home.”

Gustavo Manrique, the minister of Environment, Water and Ecological Transition who participated in the repatriation of turtles, said that “seeing them walk freely in their new home shows that the time and effort invested over the years to care for them has been worth it.”

The ministry said that due to the difficult access, the repatriation was done with the logistical support of a helicopter that facilitated the transfer of the giant tortoises, which measure between 28 and 35 centimeters (11-14 inches) in length and weigh between 4 and 5 kilos (8-11 pounds) each.

“The Sierra Negra volcano is home to four populations of giant tortoises that until now were considered to be the same species (Chelonoidis guntheri), although they remain geographically isolated,” the ministry said. “However, there are important morphological differences between them, so the corresponding genetic studies are being carried out to rule out that they are different species.”

The species is native to the eastern flank of the Pacific Ocean in the Galápagos Archipelago.

The “guentheri” part of its name is in honor of zoologist Albert Guenther, the first scientist to document the characteristics of a tortoise of this type on Pinta Island in 1877.

This species of tortoise matures at about 20–25 years of age and longevity of 100 years or more is not unusual, according to the International Union for the Conservation of Nature’s Red List of Threatened Species. “Generation time is estimated at about 60 years.

“The species is characterized by two distinct morphotypes: animals with domed shells, and some with flattened shells, known as ‘aplastados’. The domed shell tortoises primarily graze on low-growing herbaceous vegetation, while the aplastado types often feed on shrubs.”

The species is listed as critically endangered on the IUCN’s Red List of Threatened Species.