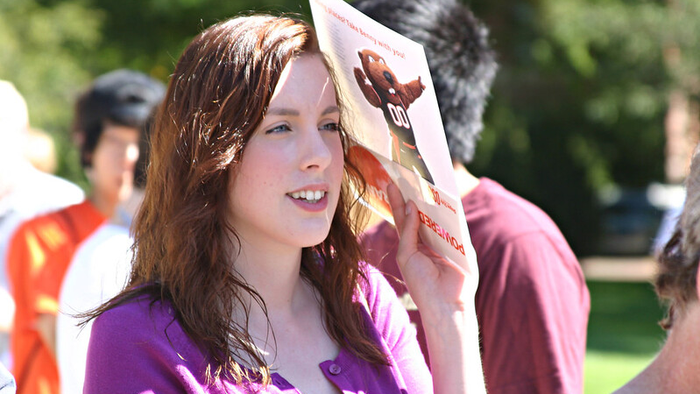 A student at Oregon State University shields herself from the sun. Ultraviolet light from the sun stresses skin cells, raising the risk of contracting skin cancers. (Celene Carillo/OSU)

A vaccine that stimulates the skin’s natural defense mechanisms may one day ward off skin cancer.

Ultraviolet (UV) light from the sun causes oxidative stress on skin cells, increasing the probability of contracting skin cancers such as melanoma. Arup Indra, a professor at Oregon State University, led a study that found that messenger RNA vaccines, such as those used for COVID-19, may promote the production of thioredoxin reductase 1 (TR1) protein in skin cells, reducing the risk of cancers induced by UV light.

In the United States, skin cancers are among the most common cancers, according to the Centers for Disease Control and Prevention. The most lethal type is melanoma, where cancerous cells form in melanocytes — skin cells that produce melanin pigments, which determine skin color.

Most skin cancer cases, according to the CDC, are caused by exposure to UV light. People seek to tan themselves, producing melanin, by exposing themselves to sunlight or tanning beds.

The authors of the new study, published in the Journal of Investigative Dermatology, used lab mice to study the TR1 protein’s role in keeping skin cells healthy.

“For more than 40 years, researchers have looked at dietary antioxidants as a possible source of inexpensive, low-risk agents for cancer prevention,” Indra said, “but they have not always performed well in clinical trials and, in some cases, have actually been harmful — hence the need to try to intervene with new chemoprevention agents such as an mRNA vaccine.”

TR1 is essential to melanocytes’ antioxidant system, which offers protection from reactive oxygen species (ROS) that rob electrons from cells and damage DNA. Melanocytes are not only endangered by ROS assaults from the sun but also through their process of creating pigment, or melanogenesis, which also produces ROS. By transforming electrons, antioxidants turn off what would otherwise be a chain reaction affecting melanocytes and thereby prevent oxidation.

MRNA vaccines induce cells to produce a specific protein. In COVID-19 vaccines, it is a harmless piece of the virus’ spike protein that stimulates an immune response. In the case of a future melanoma vaccine, that protein would be TR1.

Indra noted that in the future, people at an increased risk of skin cancer could ideally be vaccinated once a year against melanoma.

“Everything needs to be tested and validated in preclinical models,” he said, pointing out that an mRNA vaccine would have to be generated and then tested to determine how it boosts natural defense mechanisms. “Clearly we’re at the tip of the iceberg, but the possibilities are exciting for preventing different types of disease progression including cancer by modulating the body’s antioxidant system,” he said.