VIDEO: Ice Got You: Cop Crosses Barely Frozen Lake To Save Stranded Dog

Without hesitation, the officer walks on thin ice to rescue the dog that was struggling in water about 50 yards from shore. 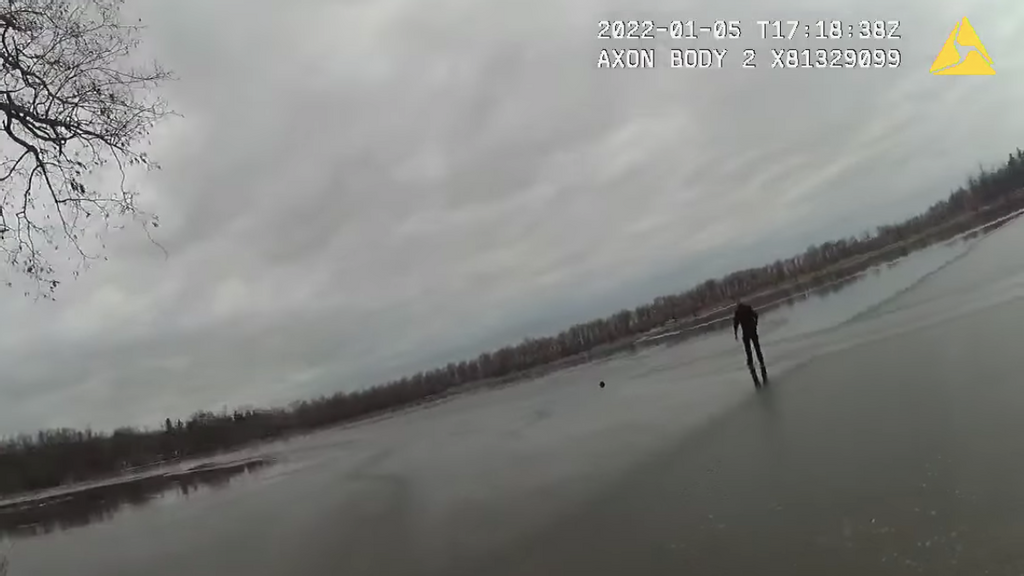 Police Officer Jon Smith walked across the thin ice of a lake to save a dog in Lewiston, New York. The dog had been trapped in the water about 50 yards from shore. (Lewiston Police Department/Zenger)

A 10-month-old Labrador retriever gave a warm welcome to a police officer who walked across the thin ice of a lake to save “Kona” from the freezing water.

Video posted online by the Lewiston, New York, Police Department on Jan. 5 shows Officer Jon Smith coaxing the dog out of the water and back onto the ice at Bond Lake, where it runs to meet its owner. The dog had been trapped in the water about 50 yards from shore.

“Without hesitation, [Smith] removed his equipment and went in after him, bringing him safely back to land and reuniting him with his owner,” the Lewiston Police Department said in a message accompanying the video.

On Jan. 6, the Lewiston Police Department posted an update: an email from the previous night addressed to Police Chief Frank Previte from the owner of the dog.

“A friend and I were walking our dogs off leash (guilty and remorseful) in Bond Lake Park. She is a 10-month-old Lab and usually stays close by the senior dog, but instinct kicked in when a flock of geese landed in the middle of the lake,” the email says.

“The afternoon took a horrible turn when Kona took off and ran … onto the ice and fell in where the ice ended and the water began. Although she is a strong swimmer, there was zero chance of her getting back out onto the ice, and she began to panic and tire quickly. In lieu of her being so far out, our remote location, the unpredictability of the ice (…I could see right through it) and the fact that I had recent back surgery, I called 911 and asked for the local fire department’s ice rescue team.

“Kona was already in the water for 10-15 minutes and very tired when three officers from your department pulled up to the scene, one being Officer Jon Smith. Without hesitation and any rescue equipment, Officer Jon Smith removed his vest and gun belt and cautiously made his way out onto the ice, monitoring the condition as he went. This was no close to shore rescue … she was far from shore. He was able to get close enough to grab 75-pound Kona and pull her to safety.

“Kona and I and everybody that loves her are extremely grateful for his selflessness and courage,” the owner wrote in the email. “You should be proud to have Officer Jon Smith as a member of the Lewiston Police Department. His professionalism and bravery should be applauded. … Kona and I will visit the police station soon to thank Officer Smith once again for his outstanding service.”

As it happens, the department recently recognized Smith for his courage. In October 2021, he rescued an elderly resident from her burning home. She was unable to get out before the fire department arrived.

In a post on Oct. 6, the Lewiston Police Department said: “Of course he was trying to keep this to himself, but that didn’t work out because we have numerous tattle tales among our ranks. Great job Officer Smith! You even made the firemen jealous.”

Following the rescue of the dog in the freezing lake, the department said: “Well folks, he’s done it again. After just receiving a department award for pulling a woman from a burning house, this time it was a four-legged friend.”