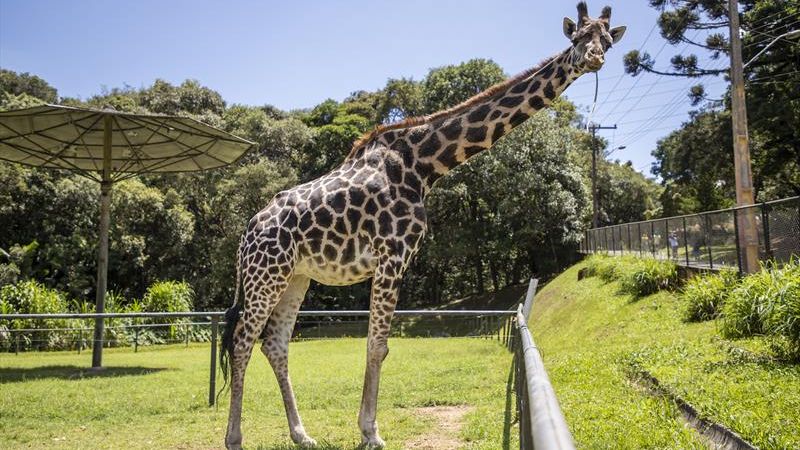 Pandinha, the world's fourth-oldest giraffe, who would have turned 33 in May 2022. She died in Curitiba Zoo in Brazil. (Isabella Mayer/SMCS)

One of the world’s oldest giraffes has died in a Brazilian zoo. She was 32.

Pandinha died at Curitiba Municipal Zoo in the city of Curitiba, in the Brazilian state of Paraná, on Jan. 10.

The zoo’s Fauna Research and Conservation Department said Pandinha was the oldest giraffe in Brazil and the fourth-oldest in the world. In the wild, giraffes live between 15 and 25 years, but they can live longer in captivity.

She was the daughter of Pacheco and Mandinha, whose names were amalgamated to form her own. Pandinha would have turned 33 in May.

The department said the animal had severe inflammation in multiple joints, known as polyarthritis.

Pandinha was born at Curitiba Zoo in 1989. Visitors were unable to see the elderly giraffe during her last few days, due to her condition and age, which were affecting her quality of life.

Department director Edson Evaristo said Pandinha’s condition progressed to crepitus (joint popping) and she was in a great deal of pain, suffering with movement difficulties and marked weight loss.

The zoo said she underwent treatment to alleviate the situation.

“It is very difficult to say goodby to an animal that we had the honor of taking care of for so long. Being able to be so close to a gentle giraffe like Pandinha was a special and precious experience, and she will be greatly missed,” Evaristo said.

There are also senior giraffes living in zoos in Colombo, the capital of Sri Lanka, as well as Fort Wayne, Indiana, and Tucson, Arizona, according to the Curitiba Council.

Besides Pandinha, there are several recent cases of elderly giraffes dying in the last few months.

Taronga Western Plains Zoo in New South Wales, Australia, announced the death of Mutangi, who was 31, in early December 2021.

Jimmie, said to be the oldest living male giraffe, died in November 2021 at age 26 at the Plumpton Park Zoo in Rising Sun, Maryland. He went into hospice care in October.

“Unfortunately, his hoof and leg conditions had progressed to where he was experiencing constant discomfort,” the zoo said in a press release. The zoo said it explored all possible treatment options before euthanizing the beloved animal.

Once zoo director Cheryl Lacovara took over the facility, she secured Jimmie a companion, named Annabelle. Before that, he had lived alone for 10 years. The Plumpton Park Zoo has begun raising funds in hopes of finding a male mate for Annabelle.

«Previous Post
Bark From The Dead: Pups Missing For A Month Found Alive At The Bottom Of A Well»Next Post
VIDEO: Thanks Fir That: Zoo Feeds Massive Christmas Tree To Elephants