The giant spruce was felled as a special new year's treat for the tuskers.
By Joseph Golder January 12, 2022
Facebook
Twitter
Linkedin
Email 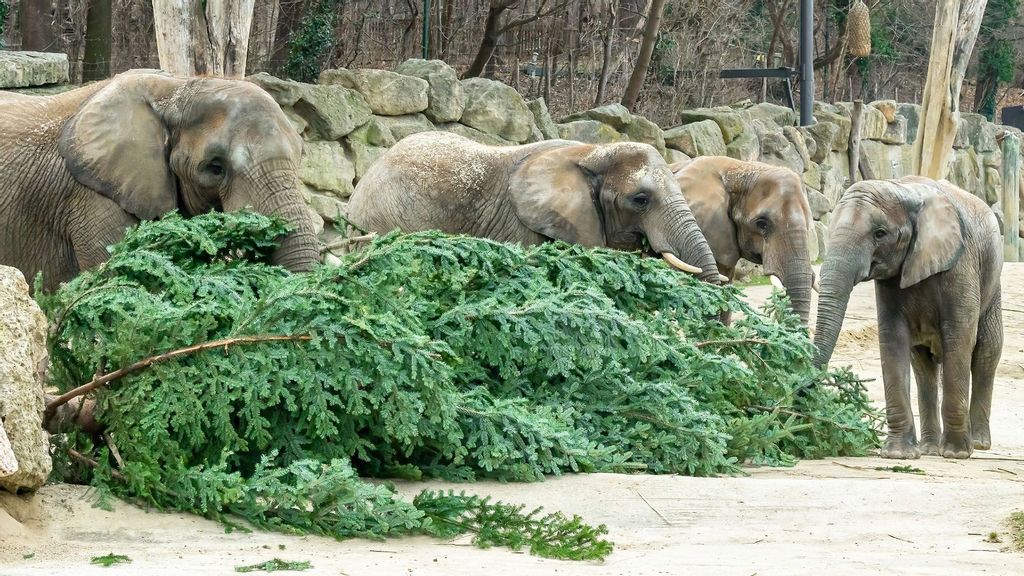 The world’s oldest zoo has fed a 150-year-old fir tree that doubled as the Christmas tree at the Schönbrunn Palace Christmas Market to its African elephants for breakfast.

The Schönbrunn Zoo in Vienna, Austria, gave the large tree to its herd on Jan. 11. The tree is a key part of the Schönbrunn Christmas Market, located in front of the imperial palace.

“The fir tree from the Steyrtal Federal Forestry Operation in Upper Austria, which previously graced the Schönbrunn culture and Christmas market, was felled today and handed over to the herd of five elephants. They obviously had fun with the traditional winter surprise,” the zoo said in a statement.

The zoo said the elephants enjoyed nibbling at the rare delicacy.

“The female elephant, Numbi, was the first to brave the fragrant fir tree. With a small branch, she dashed back to Tonga the elephant and her daughters, Mongu and Iqhwa. Shortly afterwards, the bull elephant Tembo plunged into the woody adventure. Together, they nibbled and plucked curiously at the needles and branches and pulled the prickly wood through the entire complex.”

Zoo director Stephan Hering-Hagenbeck said: “The untreated tree serves the elephants primarily as a creative activity. They scrape off the bark and use it as a scratching post, for example. A welcome change for our elephant herd.”

The zoo said that experts from the city’s forestry office felled the 150-year-old, 59-foot fir tree and cut the softwood into pieces to be transported to the nearby zoo by truck.

Christmas market organizer Gabriela Schmidle, of the Morad Travel Service in Vienna, said she likes celebrating the beginning of the year with this tradition. “The handing over of the Christmas tree to the elephants has become a New Year’s custom that I have come to love.

“I couldn’t imagine a nicer way to end the Schloss Schönbrunn culture and Christmas market.”

Some Christmas trees have been repurposed in this manner in Vienna since 2008, “helping the elephants in Schönbrunn Zoo to receive a late Christmas present,” Schmidle said.

Many of the other Christmas trees displayed in the Austrian capital are burned, and the energy is converted into electricity and heat.

African elephants have a special distinction: They are the largest land mammals on Earth. Their herds wander through 37 countries in Africa. But the greatest challenge forest elephants and savannah elephants now face is hunters illegally killing them to feed the ivory trade.