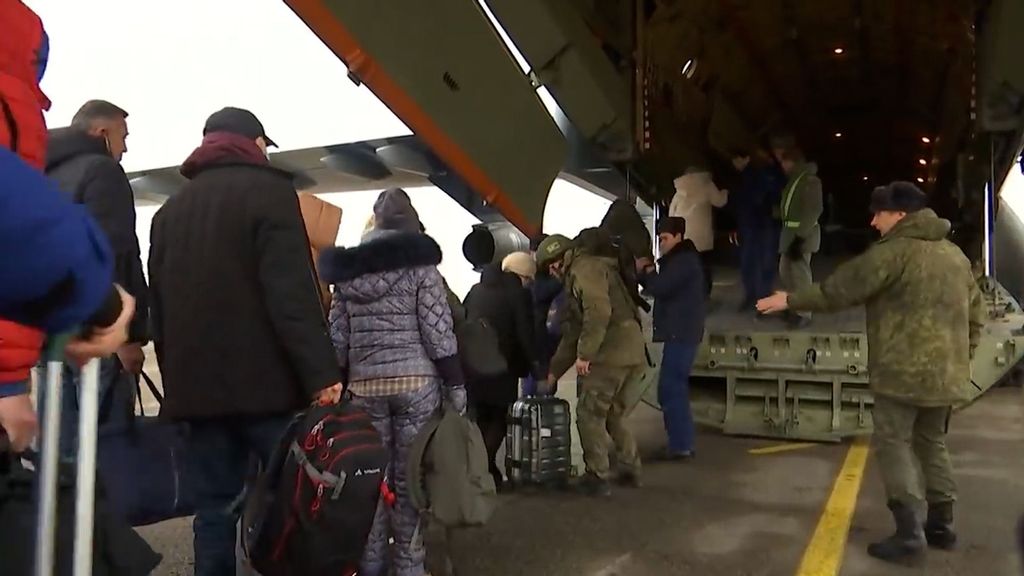 Russian soldiers help civilians who are being evacuated from Kazakhstan, where violence has rocked the country as a result of rising fuel prices. The evacuees were flown to Moscow. (Russian Ministry of Defense/Zenger)

Russian troops are guarding Almaty Airport in Kazakhstan as part of peacekeeping forces called in by the president of the country amid violent protests triggered by a rise in fuel prices.

Video shows a Russian military transport aircraft evacuating 146 Russian citizens to Moscow from Kazakhstan. The Russian Ministry of Defense said several foreign diplomats and their families were taken to the Chkalovsky airfield near Moscow by plane at the request of the embassies of Hungary and Austria.

Civilians, including families with children, can be seen boarding a bus that takes them to the aircraft. They then board the aircraft with the assistance of the Russian military. Video shows the plane taking off from the runway.

Rioting in the country led to President Kassym-Jomart Tokayev requesting assistance from the alliance, which sent thousands of troops into the country on Jan. 6.

Video was posted online by the Russian Ministry of Defense, with a message that says: “Units of the Russian peacekeeping contingent of the CSTO collective peacekeeping forces, sent to the Republic of Kazakhstan, carry out tasks to protect important state and socially significant facilities.

“Air Force personnel from the peacekeeping contingent have been protecting and ensuring the security of Almaty International Airport since the beginning of the operation in the Republic of Kazakhstan.”

Russian soldiers can be seen guarding strategic points at the airport and also handling day-to-day operations. Other images show Russian soldiers assembling and launching a drone to monitor the perimeter. The video ends with footage of armored personnel vehicles patrolling the area.

The ministry also said: “To control the situation in the areas where missions are being performed, units of the CSTO … have organized aerial reconnaissance by unmanned aircraft.”

Scores of demonstrators and security forces have been killed in clashes in Kazakhstan over rising prices for liquefied petroleum gas due to the government’s removal of its subsidy on the gas. Riots broke out, the internet was suspended, the cabinet was dismissed, and major damage was done to several government buildings in Almaty, the country’s largest city, according to news reports.

A joint briefing by the commander of the collective peacekeeping forces of the CSTO in Kazakhstan, Col.-Gen. Andrey Serdyukov and Kazakhstan Deputy Minister of Defense, Lt-Gen. Sultan Gamaletdinov, was reported by Russia’s Ministry of Defense on Jan. 9.

“In accordance with the decision of the CSTO Collective Security Council, the collective peacekeeping forces have completed deployment on the territory of the Republic of Kazakhstan,” the statement says.

Around 3,000 external military personnel are reported to be in Kazakhstan.