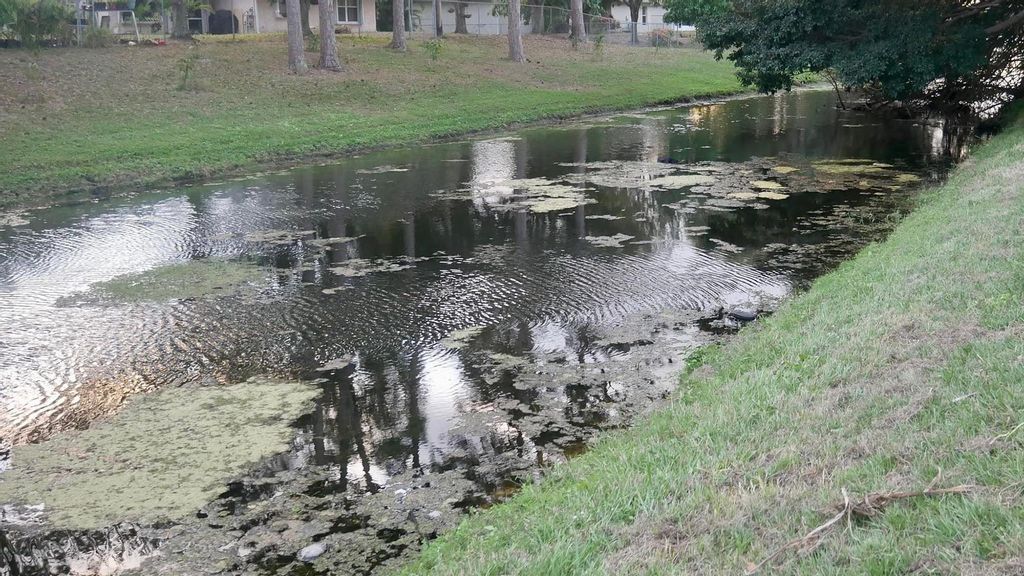 Suspects swam across this canal after ditching a stolen car in an effort to avoid arrest in Port St Lucie, Florida, on Jan. 8. (Port St. Lucie Police/Zenger)

Three teens in Florida face charges in connection with a stolen vehicle that they abandoned to evade arrest, police in Port St. Lucie said.

Video posted by the Port St. Lucie Police Department shows the three unnamed suspects, identified as two 17-year-olds and one 14-year-old, fleeing on foot and then swimming across a canal to try and avoid arrest.

The video was captured by a Martin County Sheriff’s Office police helicopter.

“On Saturday, Jan. 8, at approximately 4 p.m., the Martin County Sheriff’s Office observed a vehicle traveling in their county that was previously reported stolen by a Port St. Lucie resident in December 2021,” Port St. Lucie police said in an online post.

“Martin County Sheriff’s Office deputies attempted a traffic stop on the vehicle on I-95, but the vehicle did not stop.”

After exiting I-95, police said, “three occupants of the vehicle exited and fled on foot. The subjects immediately began running away from the car and swam across a canal to evade arrest. A perimeter was established and the … Aviation Unit directed Florida Highway Patrol and Port St. Lucie Police officers to where the subjects were hiding.”

The three suspects were charged with grand theft of a motor vehicle and resisting arrest without violence, police said.

The stolen vehicle was recovered from the scene and will be returned to its owner, Port St. Lucie Police said.

The teens could have a had a much worse time in the canal than simply being found by police. In 2020, a Port St. Lucie man was bitten by an alligator while walking his dog near a canal. Mark Johnson told local news outlet WPLG he was walking with Rex when his foot got stuck in the mud. That’s when the 250-pound gator “lunged.”

The alligator was “clamping down pretty tight” and trying to drag him into the water when Johnson says he poked it in the eye. The encounter resulted in 62 stitches.

In October 2021, an alligator attacked a woman who fell into a canal in St. Petersburg, Florida. Wildlife officials called in a trapper who caught the alligator, which measured 10 feet, 11 inches long.

According to the Florida Fish and Wildlife Commission, there were 12 alligator bites reported in the state in 2020, the most recent year for which data are available. Eight of those bites were classified as ‘major’, meaning they required medical care beyond basic first aid.

It’s rare that alligators cause serious injury, but they can be a nuisance, especially when they show up in residential or commercial spaces.