Research team airlifted to safety, and the beloved pink iguanas said to be out of harm’s way. 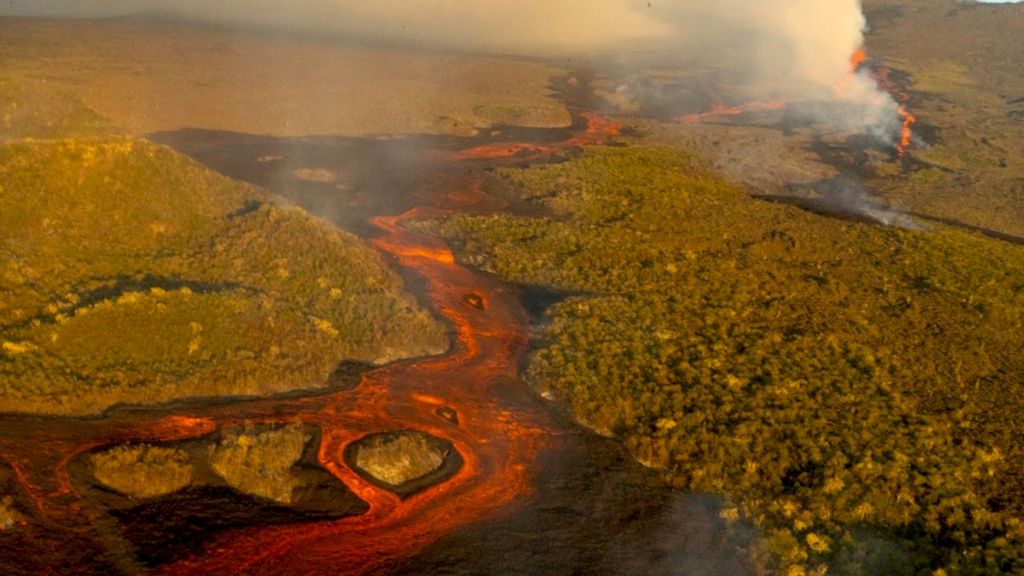 After seven years of relative calm, the highest peak in the Galápagos Islands erupted, sending lava following across Isabela Island.

The eruption of Wolf Volcano on Jan. 6 sent columns of smoke and ash into the skies at heights of between 6,200 and 12,400 feet (1,900 to 3,800 meters), Ecuador’s Geophysical Institute said, pointing out that “there are no populations near or located in the direction of the gas and ash clouds that could be affected by this activity.”

However, a team of eight people, including Galápagos Conservancy’s Conservation Manager Jorge Carrión and Galápagos National Park Rangers, “were stationed on the rim of the volcano at the time of the eruption as part of an expedition to study and protect the critically endangered Pink Land Iguana,” the Galápagos Conservancy said in a statement.

The team members were airlifted by helicopter out of harm’s way, and the beloved iguanas were said to be far from the affected area, and no additional measures were needed to protect them, officials said.

“We are relieved to report that the entire team is now safely away from the volcano. This serves as a reminder of the risks of working in remote volcanic environments and of the dedication that our scientists and the Galápagos National Park Rangers show in the face of these often hazardous conditions,” the Galápagos Conservancy statement said.

A survey flight of the area on Friday determined that lava was flowing toward an area south of the Wolf Volcano’s crater, officials said.

“This means that our emblematic populations such as turtles, land iguana and especially the pink iguana are away from the flow of lava that could in some way affect their populations,” Danny Rueda, the head of the Galápagos National Park Directorate, said in a statement.

Park rangers carrying out patrols in the protected zone and tour operators in the surrounding area filmed the event.

“The Galápagos Islands are in constant formation. Volcanic eruptions are one of the biggest attractions they have because it allows us to experience the power of nature firsthand,” Ecuadorian Minister of Environment, Water and Ecological Transition Gustavo Manrique said.

Environmental officials will continue to monitor the situation to record any changes to the ecosystem as a result of the eruption. The volcano had last erupted in 2015.

“The entire Galápagos Archipelago has been formed by volcanic activity,” the Galápagos Conservancy said in the statement. “This same activity continues to mold the islands to this day and adds complexity and risk to our essential conservation work.”