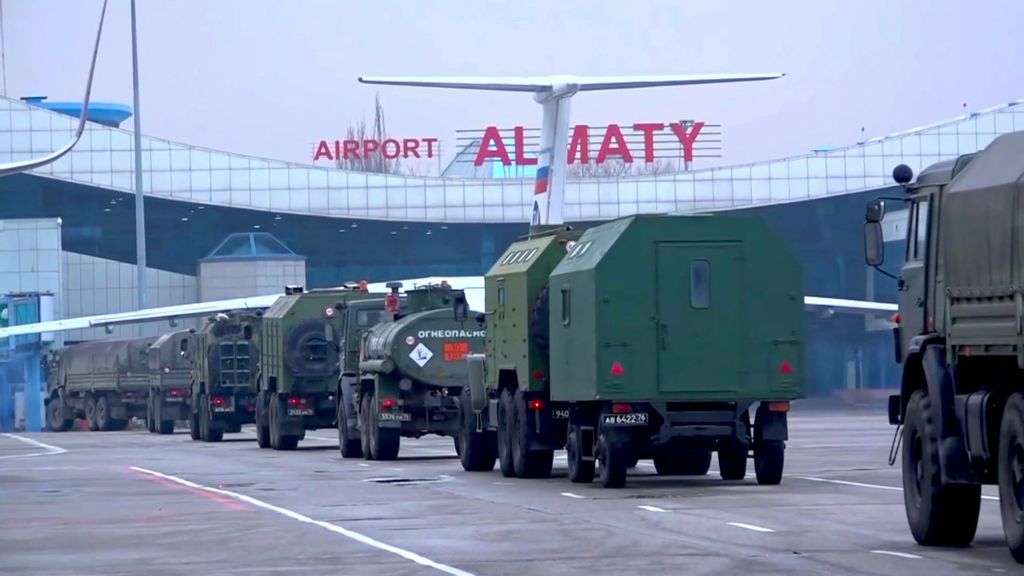 Video shows Russian troops, including paratroopers, as well as tanks heading to Kazakhstan over the weekend after the government requested the Collective Security Treaty Organization (CSTO) intervene to help quell violent protests.

Russia is one of six members of the CSTO, an intergovernmental military alliance in Eurasia. In addition to Russia, its members are Armenia, Belarus, Kazakhstan, Kyrgyzstan and Tajikistan.

Scores of demonstrators and security forces have been killed in clashes in Kazakhstan over rising prices for liquefied petroleum gas due to the government’s removal of its subsidy on the gas. Riots broke out, the internet was suspended, the cabinet was dismissed, and major damage was done to several government buildings in Almaty, the country’s largest city, according to news reports.

A joint briefing by the commander of the collective peacekeeping forces of the CSTO in Kazakhstan, Col.-Gen. Andrey Serdyukov and Kazakhstan Deputy Minister of Defense, Lt-Gen. Sultan Gamaletdinov, was reported by Russia’s Ministry of Defense on Jan. 9.

“In accordance with the decision of the CSTO Collective Security Council, the collective peacekeeping forces have completed deployment on the territory of the Republic of Kazakhstan,” the statement says.

Kazakhstan President Kassym-Jomart Tokayev requested assistance after protesters stormed the mayor’s office in Almaty, and overran the airport. Violence was also reported in other cities.

The Russian contingent that deployed to the country for “purely protection purposes” included units of the 45th Separate Special Purpose Brigade of the Airborne Forces, the 31st Separate Airborne Assault Brigade and the 98th Airborne Division.

They are part of the Russian contingent of the CSTO peacekeeping forces.

Belarusian, Kyrgyz and Armenian military units were also sent to who Kazakhstan to assist local security officials in securing key areas, around Republic Square in Almaty.

Soldiers of the 45th Airborne Brigade currently control the Almaty airport and the headquarters of the air defense forces in Nur-Sultan, according to the Russian Ministry of Defense. Members of the 31st Airborne Brigade guard the facilities of Kazatomprom, the national operator for the export and import of uranium.

The Nur-Sultan airport, the General Staff building and the television center are reportedly under the control of Russian paratroopers from the 98th Airborne Brigade.

In total around 3,000 external military personnel are reported to be in Kazakhstan.

Russians citizens stuck in the country have begun to return home on empty military transport planes, according to the Russian Ministry of Defense. On Jan. 9, some 1,400 people were evacuated from Almaty airport, which is under the control of paratroopers, on military transport aircraft belonging to the Russian Ministry of Defense.