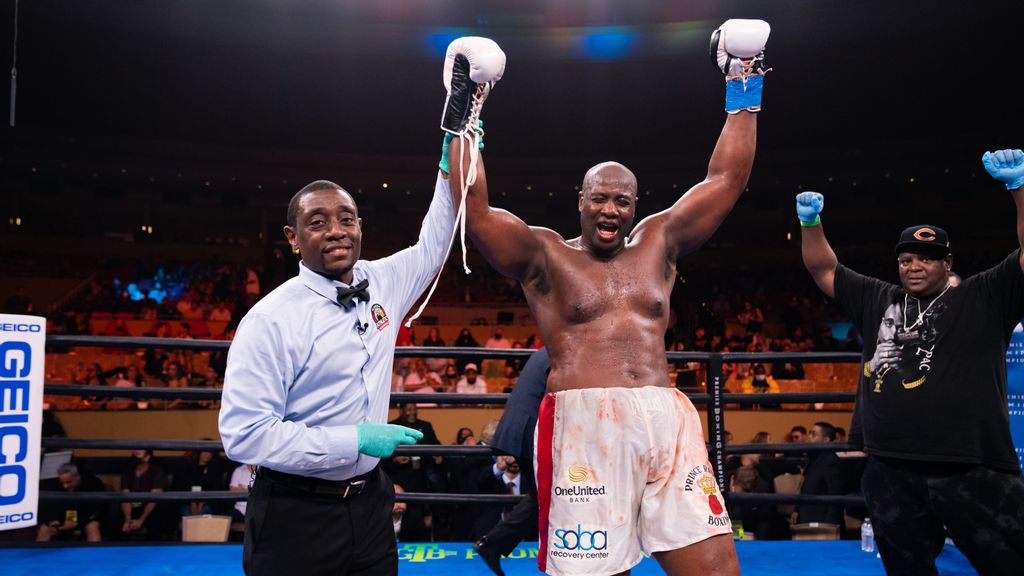 Heavyweight contender Jonnie Rice told everyone who would listen that his fifth-round TKO over the previously undefeated Michael Coffie in July 2021 was no fluke. A major upset, but no fluke.

The action came at a more measured pace in the rematch given that the two fighters were very familiar with each other. The New Year’s Day all-heavyweight pay-per-view was put on by Premier Boxing Champions.

With the Coffie sequel concluded, Rice hopes to have a busy 2022, shifting his focus and completely committing to boxing, leaving his job. With the heavyweight division heating back up, Rice looks to cement himself as viable opposition to the top dogs in the division.

Zenger catches up with Rice for his post-fight reaction, his thoughts on his future, and much more.

Zenger: Congratulations on the win over Michael Coffie. Did this fight feel much different than the first fight in terms of the things he was doing, or did he not make those types of adjustments?

Rice: It definitely felt much different in terms of things he was doing. I might have been a little delusional, and like I said in the press conference, overconfident, because this time he was moving his head a lot more to start off. He felt a lot stronger, and he was even more aggressive. So, I can honestly say that it was a lot harder and a lot different because of what he was doing.

Zenger: Did you go into the rematch feeling like you needed to knock him out again?

Rice: I really wanted the knockout. I went for the knockout. I got a little ahead of myself, not remembering this dude was training with Deontay Wilder, so taking a right hand is nothing for him as far as staying on his feet. Going for that knockout, one time I almost gassed out (laughing).

I was in serious trouble at one point. I just kept working, kept trying to recover, and focus on the fundamentals, and was able to try my best to just continue to outwork him. Going for the knockout… it just was not going to happen because I was convinced I couldn’t do it because of his training and his ability to stay strong under fire.

Zenger: I noticed him start to wilt a little when you were able to close his eye and cut him up a little bit. Did you sense he was fading at that moment?

Rice: No, he really did a good job of making me feel like he was still very dangerous. I just kept trying to land as many punches as I could. His defense was a lot better this time. I had to go to the body, which is something we actually worked on in training. I’m not really a body puncher, but I want to elevate myself and my boxing abilities, so I definitely remember doing some okay body work. He stayed dangerous the entire time.

Zenger: The commentary team wouldn’t let us forget about it, so I will ask you about it.

Zenger: You already know where I’m going with this. You came in 15 pounds heavier than the first time you met Coffie. Why the extra weight?

Rice: Yes… this win was a huge win of relief. But you know the 15 pounds, I’ll be honest, I definitely got stronger. Some of that weight was muscle, and yes, some of that weight was extra fat. I’ll be honest. Me and my coaches made sure that I did all the training that I did for the previous fight, we did all that plus more. But when you have Thanksgiving and Christmas and you eat on that one day, I wasn’t aware that the weight was going to just kind of stay on me. I wasn’t eating too bad, but that one day on Thanksgiving and that one day on Christmas, the weight just kind of stayed on me.

I didn’t make up for that by running extra. I ran enough to be ready for the fight, but I didn’t run enough to get that extra weight off of me. Some of it came from weightlifting and some of it came from overeating. That’s my fault. I did have to go to a full-time job, which was probably not the best to maintain at that time. It was small factors like that that added up very fast.

Zenger: You were a part of an all-heavyweight pay-per-view that took place on New Year’s Day. What was that like?

Rice: Man… it really made me realize how many people would be watching us with their families for entertainment over the holidays while they’re relaxing at home. It felt good to be a part of that. I had tons of people wanting me to go out and party with them on New Year’s Eve. I wasn’t worried about none of that. I was trying to start my New Year off with a bang for real. It was definitely a huge opportunity. I’m very grateful. You can see, I carried a little bit of the holiday weight in there (laughing). We ain’t letting that happen ever again.

Zenger: There was a lot to unpack in your post-fight interview. You want to make your mom a grandmother, you talked about leaving your full-time job to focus solely on boxing now that you’re in the six-figure range. Tell us about it.

Rice: My 2022 mindset is really to live life. A lot of people don’t take those extra risks. They’re chasing something that doesn’t mean anything. They are chasing money, houses and jewelry. All that stuff is of this world, but chasing actual experiences, chasing connections, that stuff is really priceless. That’s what my focus will be on this year.

Zenger: Now that you are in a position to be a full-time fighter, do you feel we will see you at your best?

Rice: You gotta realize something — boxing is supposed to be your full-time job. It’s supposed to be what you dedicate your life to because it’s such a dangerous sport. We all have our trials and tribulations, but if I’m going to a full-time job after training, and the guy I’m fighting is going home to recover, rest and recuperate so he can train even harder, I’m already at a huge disadvantage.

If I gotta be at a disadvantage for a little bit, I understand it. But it’s my job to remove myself away from that disadvantage and put myself in position to train full-time. I was watching YouTube at my job. When I was at work, I’m watching boxing. I’m trying to do whatever I can to get ahead, no matter what my situation is.

Zenger: Is there a heavyweight in particular you want to test your skills against?

Rice: There isn’t any guy I want to necessarily test myself against. I just know that when I get in the ring with them, I want to make sure I win. Watching the all-heavyweight card, I did my best to try and find video on every fighter that was fighting that night. I was in awe at most of the fights. I think they did amazing. All I can do is continue to study everybody like I always do, and when the opportunity presents itself for me to fight, I gotta be ready to win. But I was excited about every fight that was on that card. I thought it went very well. A lot of exciting fights. My fight could have been a little more exciting, but I felt like it was a great turnout and a great heavyweight card.

Zenger: Perfect world, how many times do you fight this year?

Rice: Ah man, at least three. That would be good.

Zenger: You are always entertaining in and out of the ring. Congratulations again, and I look forward to seeing you back in the ring. Is there anything else you would like to add?

Rice: I definitely got a lot of press on me right now. I have been the underdog most of my career. These two wins have put a spotlight on me right now. I want to keep winning. I don’t want to go back to losing. Even if I give it my all, I want to find a way to win. That’s my obligation right now.