A Tall Story: Medieval Warhorses Were No Bigger Than Modern Ponies, Study Says

A network of royal studs sought the varied characteristics needed for warhorses. 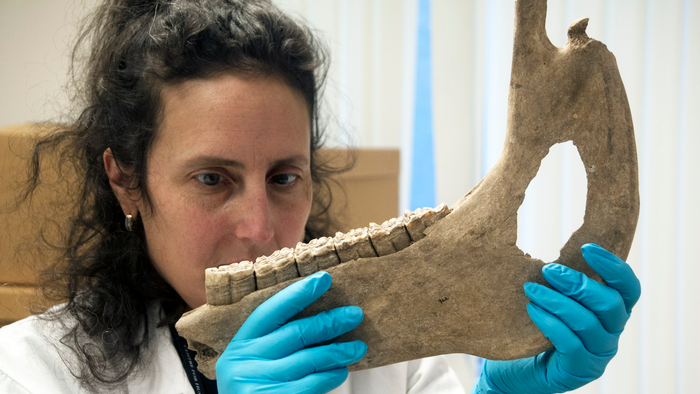 Katherine Kanne examines a horse jawbone for a study on the size of destriers, or medieval warhorses. (University of Exeter)

Despite Hollywood’s depictions of armored knights astride stalwart, massive steeds, new evidence suggests that their mounts were actually much smaller than previously thought.

Medieval European horses, when knights were bold and tanks had not yet been invented, were less than 14.2 hands high, or about 4 feet 8 inches tall, where one hand amounts to 4 inches. By contrast, an average thoroughbred horse is about 16 hands, or 5 feet 4 inches high.

While movies frequently depict warhorses of 17 to 18 hands, medieval horses reaching 15 or 16 hands were quite rare even during the 13th and 14th centuries, when Europe’s royal stud network was at its height. A horse the size of a Shire or Clydesdale (17 to 18 hands) would have been considered by people of the Middle Ages to be very big indeed.

European nobles spent large sums of money and took great care to breed, train and maintain the “Great Horse” used in combat. Having a horse and armor was what distinguished French chevaliers and Spanish caballeros (horsemen), for example, from mere peasants who went on foot. Horses were needed in warfare to break through ranks of infantry in the same way that tanks are used today.

The horse breeding tradition lives on at Sandringham, Norfolk, England, 100 miles north of London, where Queen Elizabeth II raises racing horses. But the oldest stud farm of all is at Einsiedeln Abbey, south of Zurich, in Switzerland, where Benedictine monks have been raising the Einsiedeler breed since A.D. 1064.

In a new study, archeologists and other experts aimed to determine the characteristics of the destriers, or warhorses, that medieval horse breeders were seeking to suit a wide range of functions, such as jousting tournaments and long campaigns.

The study, published in the International Journal of Osteoarchaeology, noted that the breeding and training of warhorses involved not only biological and cultural factors but also the temperament of the individual horses. The researchers examined the largest available dataset of English horse bones, dating from A.D. 300 to 1650 and found at 171 distinct archeological sites.

“High medieval destriers may have been relatively large for the time period but were clearly still much smaller than we might expect for equivalent functions today. Selection and breeding practices in the royal studs may have focused as much on temperament and the correct physical characteristics for warfare as they did on raw size,” said study co-author Alan Outram of the University of Exeter.

“Neither size nor limb bone robusticity alone are enough to confidently identify warhorses in the archeological record,” said study co-author Helene Benkert, also of the University of Exeter. “Historic records don’t give the specific criteria which defined a warhorse; it is much more likely that throughout the medieval period, at different times, different conformations of horses were desirable in response to changing battlefield tactics and cultural preferences.”

Experts found the tallest Norman horse, estimated to be approximately 15 hands, or 5 feet high, at Trowbridge Castle in Wiltshire, southwest England. The horse was similar in height to small modern light riding horses. Horses reaching 16 hands first emerged during the High Medieval age from A.D. 1200 to 1350.

It was not until the post-medieval period (1500 to 1650) that horses’ average height grew, approaching the size of modern draft horse breeds, such as the Shire and Clydesdale, and the warm-blooded Hanoverian, Holsteiner, Oldenburg and Trakehner, which are bred for sports such as dressage and jumping.

“The warhorse is central to our understanding of medieval English society and culture as both a symbol of status closely associated with the development of aristocratic identity and as a weapon of war famed for its mobility and shock value, changing the face of battle,” said co-author Oliver Creighton, who led the research.