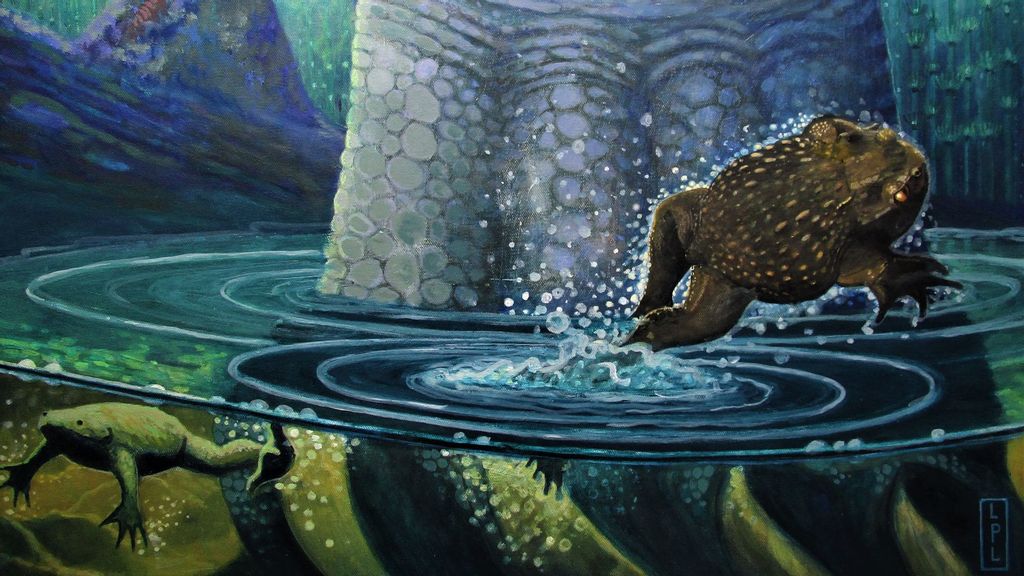 An illustration of species of frogs belonging to the Calyptocephalellidae family and toads of the Kuruleufenia genus, which both lived more than 70 million years ago and managed to survive the impact of the Chicxulub asteroid.  (University of Chile/Zenger)

Both the frogs and toads survived the mass extinction event that wiped out the dinosaurs they shared the land with.

Felipe Suazo, a researcher at the University of Chile, identified specimens belonging to the Calyptocephalellidae family (toads) and the Kuruleufenia genus (frogs) in Chilean Patagonia.

These toads and frogs lived alongside sauropods, hadrosaurs and other dinosaurs.

The researchers’ study, published in the journal Cretaceous Research, confirms that both species survived the mass extinction event 66 million years ago widely considered to have wiped out the dinosaurs.

Their ancestors, which include the helmeted water toad, also known as the Chilean helmeted bull frog (Calyptocephalella gayi), are with us today.

“The reasons why they managed to survive and proliferate during the Cenozoic, the epoch that continues into the Mesozoic, are not clear,” Suazo said.

The fossils were discovered in the Rio de las Chinas Valley in the southern province of Ultima Esperanza during paleontological surveys carried out in 2017 and 2018, the results of which were recently revealed.

The study was carried out in collaboration with Raul Gomez, a researcher at the University of Buenos Aires, who recorded similar fossils in Argentine Patagonia.

Suazo said the frogs lived in freshwater habitats and that Chilean Patagonia is the southernmost location in which the Kuruleufenia genus has been found.

The fossils date back to between 75 and 71 million years ago when the climate in the region was very rainy, and summer temperatures were mild.

“These fossils’ morphology is almost identical to that of the bones of the current Chilean helmeted bull frog (Calyptocephalella gayi), but it was decided for conservative reasons to assign these fossils only to a family level, pending new fossil remains that will allow us to corroborate whether or not they belong to the genus Calyptocephalella or to a new genus still unknown to science,” Suazo said.

The helmeted water toad is listed as “vulnerable” on the International Union for Conservation of Nature (IUCN) Red List of Threatened Species because of human consumption, habitat loss, pollution, introduced species and the fungus disease chytridiomycosis.