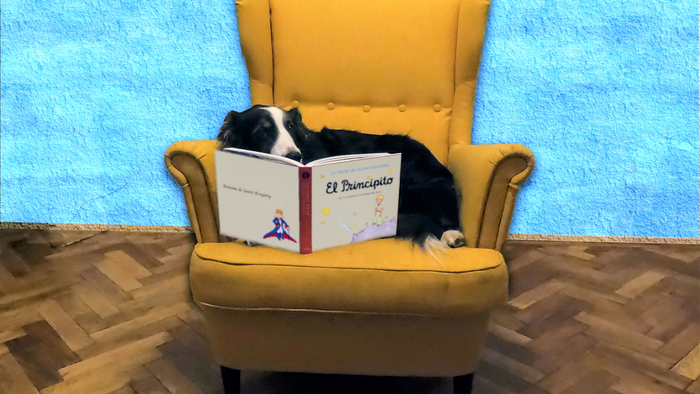 Dogs heard excerpts of “The Little Prince” in an unfamiliar and a familiar language in a new study. Researchers determined that they could distinguish between languages and also detect non-speech. (Raul Hernandez-Perez)

In a startling discovery, scientists found that dogs respond differently to familiar and unfamiliar human languages, revealing that the capacity to learn about the regularities of a language is not uniquely human.

Laura V. Cuaya of Eötvös Loránd University in Hungary sought to determine whether a dog could distinguish between languages spoken by humans. “Before, I had only talked to [my pet dog] in Spanish. So I was wondering whether Kun-kun noticed that people in Budapest spoke a different language, Hungarian,” Cuaya said about the move to the Eastern European country.

“We know that people, even preverbal human infants, notice the difference. But maybe dogs do not bother. After all, we never draw our dogs’ attention to how a specific language sounds. We designed a brain imaging study to find this out,” Cuaya said.

“This study showed for the first time that a non-human brain can distinguish between two languages,” said study co-author Attila Andics, indicating to him that non-humans can also learn about the regularities of a language. “Still, we do not know whether this capacity is dogs’ specialty or general among non-human species. Indeed, it is possible that the brain changes from the tens of thousands years that dogs have been living with humans have made them better language listeners, but this is not necessarily the case,” he said.

For the study, published in NeuroImage, Kun-kun joined 17 other canines in lying motionless in a brain scanner while researchers played excerpts of Antoine de Saint-Exupéry’s beloved novella “The Little Prince” in Hungarian and Spanish.

The dogs had heard only one of the two languages from their owners before, allowing the researchers to compare their responses to a familiar and an unfamiliar language. Cuaya said the research team also played “scrambled versions of these excerpts, which sound completely unnatural, to test whether [the dogs] detect the difference between speech and non-speech at all.”

By observing how the dogs’ brains responded to speech and non-speech, the researchers discovered distinct patterns in the primary auditory cortex, which is a part of the temporal lobe that processes sound. These distinctions were present whether the dogs heard a familiar or an unfamiliar language. Also, the dogs’ brains showed no evidence for a neural preference for speech over non-speech.

“Dog brains, like human brains, can distinguish between speech and non-speech,” study co-author Raúl Hernández-Pérez said. “But the mechanism underlying this speech detection ability may be different from speech sensitivity in humans: whereas human brains are specially tuned to speech, dog brains may simply detect the naturalness of the sound.”

The dogs in the study could also distinguish between Hungarian and Spanish. Older dogs appeared to be more adept at distinguishing between a familiar and an unfamiliar language.

As for Kun-kun, Cuaya said her dog “lives just as happily as he lived in Mexico City” and has seen snow for the first time and swam in the Danube River. “We hope that he and his friends will continue to help us uncover the evolution of speech perception,” Cuaya said.