One suspect was caught on camera wearing a wig, face mask and stockings during the holdup.
By Joseph Golder January 6, 2022
Facebook
Twitter
Linkedin
Email 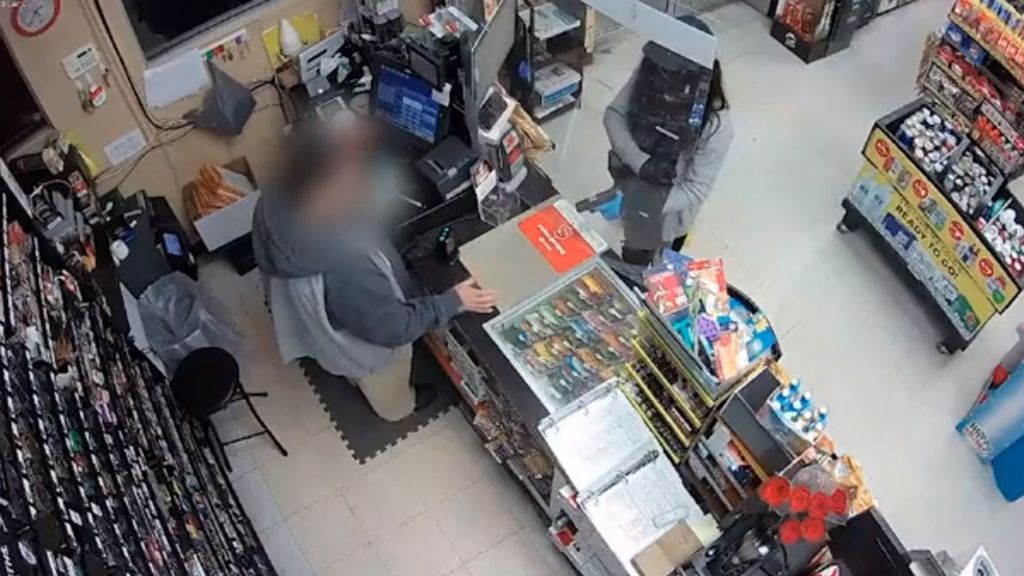 One of the robbery suspects is caught on surveillance camera wearing a black wig, black stockings, boots, a hat, sunglasses and a face mask at a convenience store in DeBary, Florida. (Volusia Sheriff's Office/Zenger)

Two men in Florida face felony robbery charges in connection with holdups at two gas stations on the morning of Jan. 4.

John M. Graham, 33, faces felony charges of robbery with a firearm and carrying a concealed weapon without a permit, police said.

Klandi T. Brooks, 24, is charged with felony principle to robbery with a firearm.

Police said Brooks and Graham are also facing charges in another robbery earlier in the morning in DeBary. In that incident, one of the suspects is caught on surveillance camera inside the gas station.

Daytona police responded to the Sunoco soon after an employee called Volusia County emergency dispatch around 4:45 a.m., “saying that a man wrapped in a blanket and wearing a wig, glasses, facemask and yellow shoes pulled a gun on her after he had asked her for a pack of cigarettes from behind the counter,” police said.

“That man — later identified as Graham — fled after taking the cigarettes and some cash from the register, heading south towards Thames Road. K-9 units tracking the suspect managed to find the wig in a shopping plaza nearby and tire tracks that indicated the suspect may have fled in a vehicle,” police said.

While that search was going on, other Daytona Beach officers discovered a rental truck parked near a store that matched a vehicle the Volusia Sheriff’s Office was looking for in the DeBary robbery. They also said they found Graham and Brooks walking through a nearby Wawa gas station and took them into custody after officers noticed that Graham’s description and clothing matched that of the suspect in the Sunoco robbery.

Soon after Graham was detained, officers found a firearm tucked in his waistband while doing a safety pat-down, police said. A similar pat-down on Brooks turned up the keys to the rental truck found in the store parking lot.

Graham and Brooks are being held without bond at Volusia County Jail pending their first appearance in court. A court date has not been set.