VIDEO: ‘Waiting And Hoping’ For Signs Of 2 Bearded Vultures Released Into The Wild Last Summer

Conservationists are confident about the birds’ ability to survive despite dangers they may face in the environment. 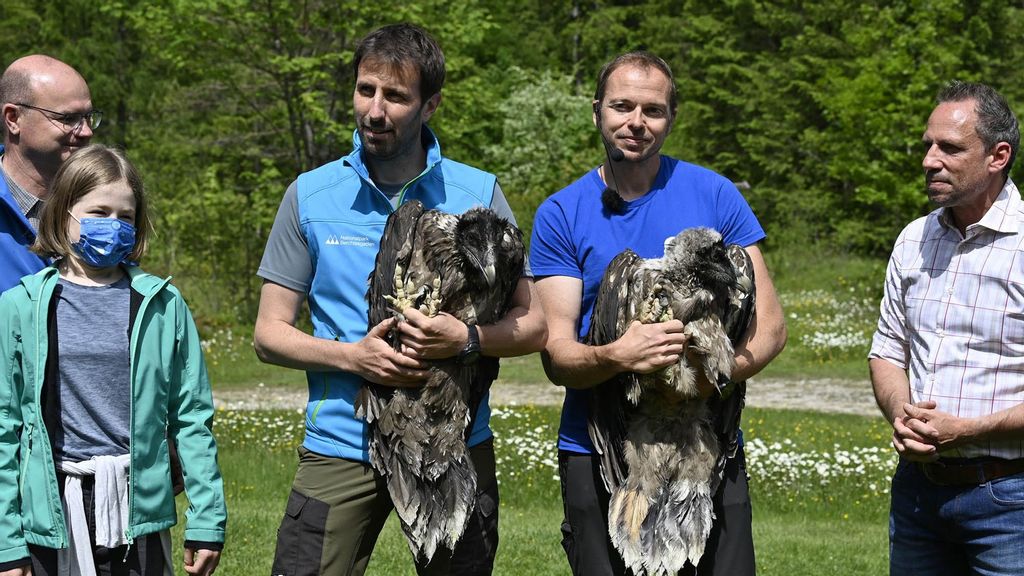 Bearded vultures “Wally” and “Bavaria” were released into the wild from Berchtesgaden National Park in Germany in June 2021. (Hansruedi Weyrich, LBV/Zenger)

The team that released two young bearded vultures into the wild in Germany in June 2021 — the first such release in more than 140 years — is waiting and hoping for “a sign of life.”

“We hope that the animals that have been released into the wild with enormous financial and personal commitment are still alive,” a statement from the nonprofit Greenpeace says, referring to the release of the birds in Berchtesgaden National Park in Upper Bavaria. “And wait for someone to see them and report this — preferably backed up by a photo.”

The release of the female bearded vultures last year was part of a Europe-wide reintroduction project more than 100 years after the last known kill.

Fans of the vultures, named Wally and Bavaria, “followed the first wing beats via live cam, and later the voyages of discovery via GPS tracking. But now it is time to wait: for the sun — and a sign of life,” Greenpeace said.

Soon after the vultures’ release, Greenpeace said, observers “could register and note everything, the sleeping and eating times, the number of wing beats.”

“Contact with ‘Bavaria,’ the more adventurous of the two female vultures from a Spanish breeding station, was broken off at the end of November,” Greenpeace said. “With ‘Wally,’ who stayed in the region for a long time, it is also becoming more and more sporadic: The battery of the GPS transmitter equipped with a solar module does not seem to have enough power in the cloudy weather.”

Toni Wegscheider, who leads the project for the state association for bird protection in Bavaria, is confident, according to the statement. “They have developed optimally in terms of range, in terms of weight, they are fully capable, and what a bearded vulture needs to be able to survive, both of them can — apart from breeding,” Wegscheider said.

Nevertheless, there are other dangers “even for the largest bird in the Alps, which reaches a span of almost three meters [9.8 feet].”

Greenpeace said that the dangers to vultures include lightning strikes, attacks by golden eagles, and even avalanches — “but they are also elementary for the animals.”

“Avalanche time is vulture time, because every avalanche is potentially a source of food if a chamois or an ibex is swept away,” said Wegscheider. November is the hardest time of year for the animals, according to the statement. The snow cover is thin, covering all the carcasses on the ground and hiding them from the vultures, and not yet thick enough to produce new ones through avalanches.

Lead poisoning poses another major danger, Greenpeace said. The scavengers ingest the neurotoxin when they eat the bones of animals shot with lead ammunition.

“We know that 30 percent to 50 percent of all bearded vultures in the Alpine region — completely unnecessarily — perish from lead poisoning,” Wegscheider said.

Those dangers are why animal rights activists are so urgently awaiting sightings of the birds, which can be identified by their bleached wing feathers.

“If someone reported a lethargic-looking, staggering or no longer able to fly bearded vulture,” Greenpeace said, “the experts would drive to the furthest corners of the Alps, search for the animal in the terrain with the help of its VHS transmitter and try to sneak the poison away with injections of medication, which is so valuable every single specimen for the preservation of the species.”

The vultures’ nests, made of spruce twigs and sheep’s wool, were situated on a large rock at some 4,200 feet above sea level, according to project manager Ulrich Brendel. The vultures were set up so that they could continue to live without human contact and were monitored by scientists at the park’s observation site through livestreaming video before their release.

The national park has posted photos of each vulture and maps showing where they have been tracked to date.

«Previous Post
Where Are They Now? Startups That Succeeded Or Failed Over The Last 20 Years»Next Post
Four New Viruses Discovered In Galapagos Tortoises After COVID-Style Tests