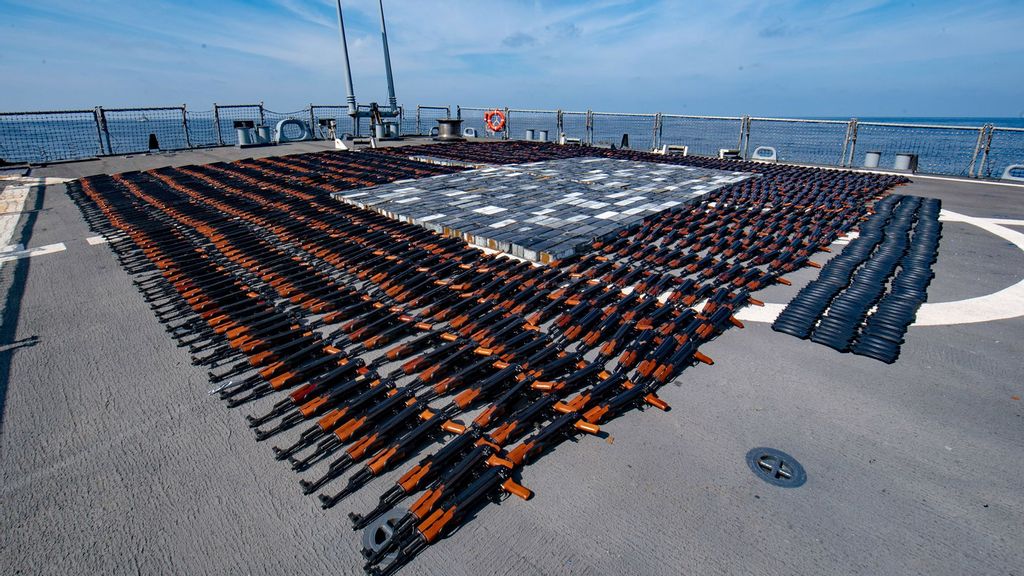 More than 1,000 assault rifles and other weaponry were seized from a stateless fishing vessel in the North Arabian Sea on Dec. 20. (U.S. Navy/Zenger)

U.S. Navy ships seized 1,400 AK-47 assault rifles and 226,600 rounds of ammunition from a stateless fishing vessel during a flag verification boarding on Dec. 20, the Navy said in a statement.

The seizure by the Navy’s 5th Fleet was “in accordance with customary international law in the North Arabian Sea,” the Navy said.

“The stateless vessel was assessed to have originated in Iran and transited international waters along a route historically used to traffic weapons unlawfully to the Houthis in Yemen,” the Navy said. “The direct or indirect supply, sale or transfer of weapons to the Houthis violates U.N. Security Council Resolutions and U.S. sanctions.”

The United States announced sanctions in June 2021 against a smuggling network that it alleges “works with Iran’s Quds Force, the elite arm of the Islamic Revolutionary Guard Corps, to generate tens of millions of dollars in revenue from the sale of commodities, like Iranian petroleum,” a U.S. Treasury statement said.

The United Nations has launched relief efforts toward Yemen’s humanitarian crisis and ending the Houthis’ war against the government and a Saudi-led coalition.

“After removing the crew and illicit cargo, U.S. naval forces determined the stateless vessel was a hazard to navigation for commercial shipping and sank it,” the Navy said.

“U.S. naval forces regularly perform maritime security operations in the Middle East to ensure the free flow of legitimate trade and to disrupt the transport of illicit cargo that often funds terrorism and other unlawful activity,” the Navy said.

The U.S. 5th Fleet’s area of operations encompasses approximately 2.5 million square miles of water area and includes the Arabian Gulf, Gulf of Oman, Red Sea, parts of the Indian Ocean and what the Navy said are “three critical choke points” at the Strait of Hormuz, Suez Canal and Strait of Bab al Mandeb.