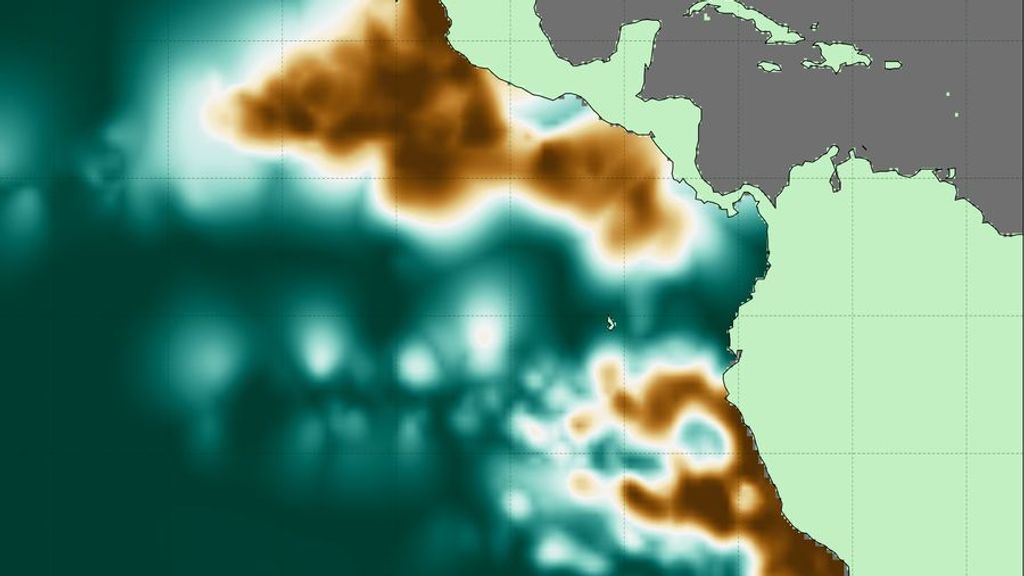 Scientists have used new methods to create 3D maps of large oxygen-deficient zones (ODZs) in the Pacific Ocean. These naturally occurring zones can limit marine ecosystems and fisheries, and are a source of nitrous oxide, a greenhouse gas.

Scientists at the Massachusetts Institute of Technology (MIT) produced an atlas of the largest of these desolate areas in the tropical Pacific. They show not only the ODZs’ volume, extent and depth but also things on a finer scale such as streams of healthier, oxygenated water that enter areas nearly devoid of life-giving oxygen.

“It’s broadly expected that the oceans will lose oxygen as the climate gets warmer. But the situation is more complicated in the tropics where there are large oxygen-deficient zones,” said researcher Jarek Kwiecinski, who developed the atlas with Professor Andrew Babbin, an MIT marine biogeochemist.

When marine microbes consume plankton, they also gobble up available suspended oxygen in affected areas. These oxygen-deficient zones are well away from passing currents, which would normally oxygenate them, and become more or less permanent in their locations, at mid-ocean depths of about 115 to 3,280 feet below the surface.

“It’s important to create a detailed map of these zones so we have a point of comparison for future change,” Kwiecinski said.

“This gives you a sketch of what could be happening,” he said, adding that the study offers data that may reveal how oxygen in the oceans is controlled.

“How the borders of these ODZs are shaped and how far they extend could not be previously resolved,” said Babbin, who pointed out that research afforded a better idea of the extent and depth of the ODZs.

Relying on nearly 15 million measurements collected over more than 40 years by research cruises and autonomous robots, the MIT researchers generated 3D maps of the ODZs at various depths that can be depicted as slices. From the maps, they estimated the total volume of the two biggest dead zones in the world’s largest ocean. One extends from the western coast of South America out about 144,000 cubic miles. The other dead zone, near Central America, is nearly three times larger.

The researchers see the atlas as a reference point so that they can track changes over time. Their study appeared in the journal Global Biogeochemical Cycles.

For more than four decades, researchers have taken samples of seawater with plastic Niskin bottles at various depths to measure oxygen levels. “But there are a lot of artifacts that come from a bottle measurement when you’re trying to measure truly zero oxygen,” Babbin said. “All the plastic that we deploy at depth is full of oxygen that can leach out into the sample. When all is said and done, that artificial oxygen inflates the ocean’s true value.”

For better results, the MIT team used data from sensors on the outside of bottles or from robots cruising at various depths. These sensors continuously measure the intensity of light released by a photosensitive dye to calculate dissolved oxygen levels or changes in electrical currents as they descend.

Taking measurements accurately, especially when concentrations are near zero, has become especially difficult. “We took a very different approach, using measurements not to look at their true value but rather how that value changes within the water column,” Kwiecinski said. “That way we can identify anoxic [oxygen-depleted] waters, regardless of what a specific sensor says.”

When their sensors showed a constant, low value for oxygen throughout a vertical column of the ocean, regardless of the true value, the researchers concluded that this meant that oxygen had zeroed out, designating an oxygen-deficient zone. “We can now see how the distribution of anoxic water in the Pacific changes in three dimensions,” Babbin said.

He and the team found that ODZs are more concentrated near their center but appear to peter out at the edges. “We could also see gaps, where it looks like big bites were taken out of anoxic waters at shallow depths,” Babbin said. “There’s some mechanism bringing oxygen into this region, making it oxygenated compared to the water around it.”

«Previous Post
‘Dangerous’ Experiment Simulated Sun In A Lab»Next Post
Where Are They Now? Startups That Succeeded Or Failed Over The Last 20 Years