It’s Hard To Look At The Lakers’ Struggles And Not Wonder, ‘What If?’

The Lakers haven’t looked like a championship contender, and at this point, it’s fair to wonder whether the current core ever will 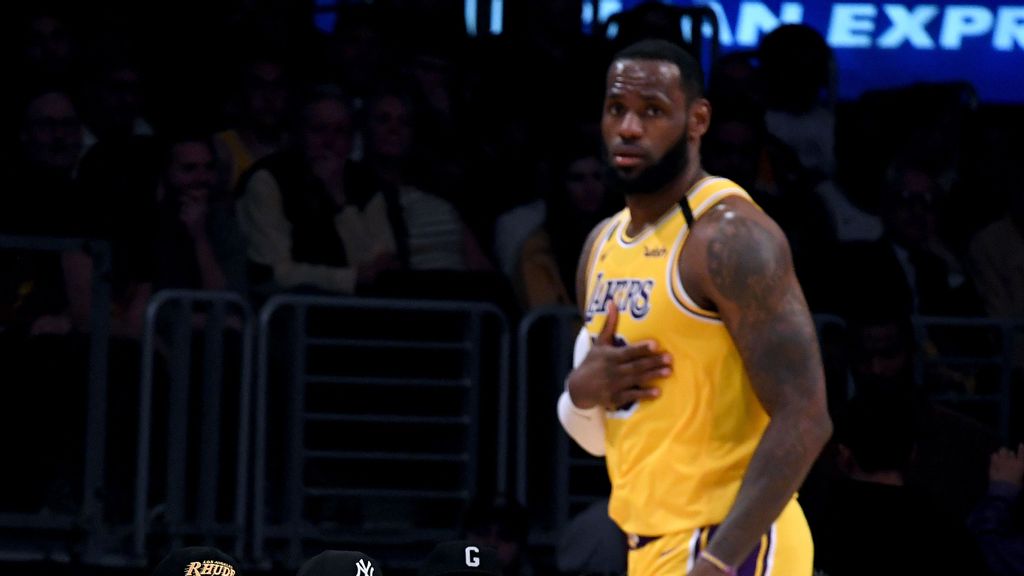 LeBron James has been incredible, and despite his best efforts, the Lakers brought in the New Year one game under .500. (Harry How/Getty Images)

In short order, Kyrie Irving is going to cross a defender out of his shoes, and Klay Thompson will begin raining threes like it’s nobody’s business.

The rich stand to get richer in Brooklyn and San Francisco while the Los Angeles Lakers live as paupers.

LeBron James has been incredible, and despite his best efforts, the Lakers brought in the New Year one game under .500. Worse yet, they haven’t exactly looked like a team that knows what it’s doing — neither on the basketball court nor in the front office.

Having ripped off three wins in a row, there’s still a chance for them to turn things around. But until they do, the team’s relative lack of success opens it up to plenty of second-guessing.

In an alternate reality, the Lakers could’ve had Kyle Lowry and Buddy Hield, the latter of which was in town Tuesday evening. Perhaps they could still have Montrezl Harrell and Alex Caruso. Maybe, just maybe, they could’ve still resembled the champion they once were.

Instead, they’ve look every bit like puzzle pieces that don’t fit.

Had Anthony Davis not gotten injured during last season’s first-round playoff series against the Phoenix Suns, there’s no telling where the 2020-21 season would’ve ended for LeBron and company.

In most instances, a defending champion that saw one of its top players’ season end early would exhibit a certain amount of patience and attempt to plug holes rather than blow the entire team up, but not in Tinseltown.

Between then and now, the team added talent without considering fit, playing an NBA version of supermarket sweep. A mad dash down the aisles, the Lakers have grabbed any and everyone they could, and they’ve done so all at the expense of the identity and harmony that brought them a championship in 2020.

Aside from James and Davis, Dwight Howard and Talen Horton-Tucker are the only members of the championship team that remain. And although Avery Bradley was technically a member of the squad, he didn’t play in the Orlando Bubble. In all, the team brought in nine new faces, not including replacement players.

And to what end?

It would be foolish to believe that the Lakers would have reinvented themselves without James at least blessing the moves, if not downright advocating for them. But to this point, it’s been more of a car wreck than a smooth drive down the I-110 freeway.

Russell Westbrook appears to have lost a step and hasn’t exactly thrived alongside James and Davis. It’s damning considering the fact that Kyle Kuzma and Kentavious Caldwell-Pope were sent to Washington along with Harrell. And it gets even worse when one considers that Westbrook’s $44 million salary probably had something to do with the team deciding to let Caruso take his talents to Chicago.

According to Kuzma himself, a deal that would have sent him to Sacramento in exchange for Hield “was done,” but the Lakers obviously opted to pursue the deal for the bigger-named superstar — not the piece that would have better augmented the team’s core duo.

Last February, seeking an upgrade at point guard, the team pursued Toronto Raptors veteran Kyle Lowry. A deal failed to materialize because the Lakers reportedly refused to include Horton-Tucker.

On. Jan. 5, with Los Angeles sitting one game over .500 at 20-19, one can’t help but to wonder how a Lowry-Hield-James triumvirate would’ve looked, particularly when Lowry and Hield possess the gifts that seem to be lacking around James in Los Angeles.

Hindsight might be 20/20, but in the NBA, the best general managers can tell the future.

At the time the Westbrook trade was made, it wasn’t completely unreasonable to believe that he could create for both Davis and James and relieve some of the pressure on James to play point guard. But Westbrook’s poor decision-making and errant shooting has undercut his value to the team. That they sacrificed so much to bring him in can’t be ignored.

Needing to build a core around Westbrook, James, Davis, Carmelo Anthony and Kent Bazemore, the Lakers would eventually re-sign Horton-Tucker and sign both Malik Monk and Kendrick Nunn. Together, the three represented much-needed upside, but the moves that followed created logjams that only made Vogel’s job more difficult.

At least on paper, Trevor Ariza and Dwight Howard brought championship pedigree back to the team, as did Rajon Rondo. But each are over the hill, with Rondo, ironically, being traded to Cleveland in a move that amounted to a roster spot-opening, cost-cutting measure for the franchise.

Brought in individually, when including DeAndre Jordan, the Lakers managed to add talented players to a core consisting of generational talents.

But as a team?

They have left a lot to be desired. Someone watching from afar could fairly wonder whether the team has just been making it up as it went along.

In the NBA, you’re only as good as your record, not your past accomplishments. So as Kyrie  prepares to suit up for Brooklyn and Klay prepares to write a new chapter in his story, we can’t help but to look at the Lakers and wonder whether the team’s moves will ultimately pay off.

Perhaps the team will find a way to trade for Hield; after all, he did showcase his unlimited range by knocking down seven threes last night. Maybe the likes of Jerami Grant can be had.

But if there’s one thing the Lakers shouldn’t have been looking for this season, it’s a savior. Yet, that appears to be precisely where we are.

In an alternate reality, the team could’ve kept its core together while still adding Anthony, Howard, Monk and Nunn.

Maybe they trade for Lowry, maybe they don’t.

Maybe Hield is drilling three-pointers at Crypto.com Arena, or maybe he isn’t.

But based on what the Lakers have done and the return yielded, there’s reason to second-guess all that has transpired.

As we approach the halfway point of the season and the Lakers fail to resemble close to a championship contender, we can’t help but to remember when they did.

We similarly can’t help but to wonder what they will eventually become.