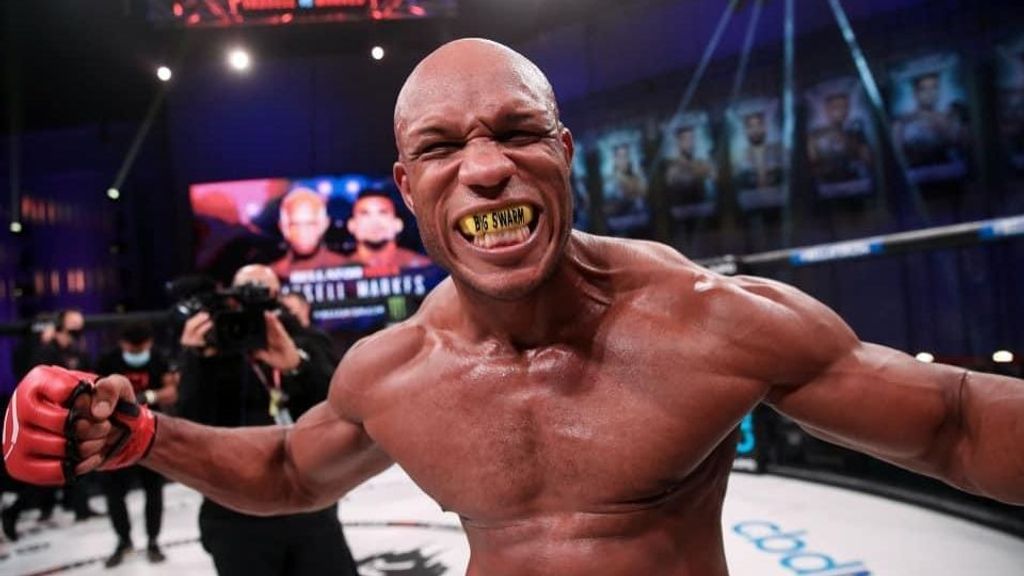 An amped-up Linton Vassell ready to do battle in the Bellator cage. (Courtesy Bellator MMA)

The Bellator MMA heavyweight division will crown a definitive heavyweight champion on Jan. 29 when titleholder Ryan Bader will face interim world champion Valentin Moldavsky. Waiting in the wings for a winner is contender Linton Vassell.

Vassell is coming off an impressive three-round decision victory over Tyrell Fortune, putting him on a three-fight winning streak. Vassell has losses to both Bader and Moldavsky and wants to not only avenge those losses, but also capture his first Bellator title in the process. After a long journey at light heavyweight, Vassell finally feels he’s done all the proper legwork to make a run in the heavyweight division.

Known as “The Swarm” for his aggressive striking style, Vassell hopes 2022 will be the year he captures the Bellator title that has eluded him since his time with the promotion, dating to 2013. Hoping for a quick turnaround fight, Vassell plans to be fully prepared for a rematch with either Bader or Moldavsky.

Zenger caught up with “The Swarm” to hear about his recent win, whether he has a personal preference for the winner of Bader–Moldavsky, and changes he made that led to his recent winning streak.

Zenger: Congratulations on the win over Tyrell Fortune. How do you feel about your performance?

Vassell: Thank you! We are always our worst critics. I wish I would have gotten the finish, but we knew Tyrell was a tough, young stud. I feel like I showed people that I can grapple. Everyone asks, “How are you going to handle this guy and this guy on the ground?” I tell people all the time that I can grapple. I felt like this solidifies that I can grapple with anybody. I don’t care what belt you are, what championships you’ve won, I can hold my own in the grappling department against you.

Zenger: I was shocked by the decision being split. I thought you won unanimously. Did you feel the fight was that close?

Vassell: I thought it was unanimous. Someone obviously saw it a little bit different. It is what it is; you can’t complain. I thought I won all three rounds. There is no shadow of a doubt with that.

Vassell: Yes! When I was light heavyweight, I would always stay about 230 [pounds]. And then I just bulked up to 250 for my heavyweight debut. I didn’t put into consideration that that was a lot of weight to put on. That was a lot to go into the fight with all the extra weight.

Me and my coaches went back, and we saw that I did good for the first two rounds, but you could see that the weight was an issue. So, we cut that back. I lost 10 pounds and came in at 240 to keep up with the cardio. I’m out swimming right now. Doing the right things to change it. I have a mindset coach as well that I have been working with for a number of years. That’s a big part of the game as well. That cardio is key. It doesn’t matter what weight you are. I know the heavyweights usually don’t go the distance, but you still gotta be ready in case it does go the distance.

Zenger: You are a big guy, so you could sense that eventually you would have to move up to heavyweight. Do you feel like the timing was perfect for you to make the move?

For me, it’s a peace of mind not having to wake up and weigh myself to see if I’ve lost weight or check the scales to see if I’m too heavy and need to go for a run. You end up overtraining. I feel at heavyweight, you don’t overtrain. You do what you need to do and a little bit extra.

Zenger: Have you implemented weightlifting, or have you stayed away from that aspect of putting size and strength on?

Vassell: It’s just doing things the right way. Corey Peacock, our strength coach, doesn’t make us lift heavy anyway. We’re doing reps from anything from five up to 12. So, it’s not that one powerlift, it’s like sets of 5 up to 12 rather than lifting heavy.

Zenger: The heavyweight champion Ryan Bader has business to handle in January against interim champion Valentin Moldavsky. Both of those guys hold a win over you. I’m sure you are eyeing a title shot at some point next year.

Vassell: One thousand percent. Obviously, I would like to be next, but I know how the business is. You have an interim champion and a champion; it makes sense for them to unify the title rather than have two champions. For me, I would like to fight again as soon as possible, by March. Win that fight and then line up next for a title fight.

It is what it is. I know things don’t always go as planned. I would like to be fighting next for the title, but I would fight someone else next and then fight the winner of Bader and Moldavsky.

Zenger: Do you have a preference in which loss you would like to avenge first for the title?

Vassell: I have unfinished business with both of them. It’s kind of like pick your poison, isn’t it? Either or, I’ve got to fight both of them again at some point.

Zenger: Do you feel like you are such a different fighter from the first time you fought those guys, or are there things you would change heading into a rematch with either?

Vassell: There is always things to change. I wouldn’t say I have all the answers. Definitely, I’m a totally different fighter then when I fought Bader in 2017 and Moldavsky in 2019. When I went into that fight, I came in at 250, and I was so slow. And I didn’t have the cardio either. And I still did a good job. It went the distance and he won on points. It’s going to be interesting when I finally get the rematch with either one of them. And I know they’re watching me. I’m coming.

Zenger: You have been such a staple with Bellator. For them to stick with you through the ups and downs of your career, what does that mean to you?

Vassell: It’s good to know that I’m wanted. People do get released after they’ve had a couple of losses. They could have released me after my second loss, let alone three. I’m still with the company, and I’m grateful and thankful for them to still believe in me and keep me with a job. I felt like I have turned it around, and now 2022 will be my time.

Zenger: I have talked to fighters who said they were in a dark place after suffering consecutive losses, and some say they just had to work harder and change some things. Would you fit into either one of those categories or possibly both?

Vassell: I wouldn’t say dark, but I did sort of think about if this was for me. I actually thought, maybe I’m done. My best years are gone. I really did. So, I wouldn’t say so much of a dark place, but I did have a bit of a losing streak that made me question myself. I was doing certain things wrong. I know everyone goes through troubles and problems. It all comes together. Obviously, because now we’re here. I feel like I’ve found the right spot for me. The heavyweight division, my mindset, everything. It’s all in place.

Zenger: How much has this winning streak done for you from a confidence standpoint?

Vassell: Oh… 10 times over. I was really confident; this has doubled that. Again, to beat Tyrell at his game, knowing everyone questioned if I could handle his wrestling, that was probably the biggest confidence booster. Not just beat him, it would be different if I just went in there and knocked him out. That’s amazing, but it wasn’t the same as me out-grappling him. That was major for me.

Zenger: You want to return before and no later than March. Do you have an opponent in mind or just whoever Bellator lines up for you?

Vassell: Pretty much anyone. I’m hungry. I want the title fight with Bader or Moldavsky, so whoever they line me up against next, that’s who it is.