In the second part of a Q+A, Chango discusses the Central Park Five, Kyle Rittenhouse and wrestling with his own demons.
By Percy Lovell Crawford January 3, 2022
Facebook
Twitter
Linkedin
Email 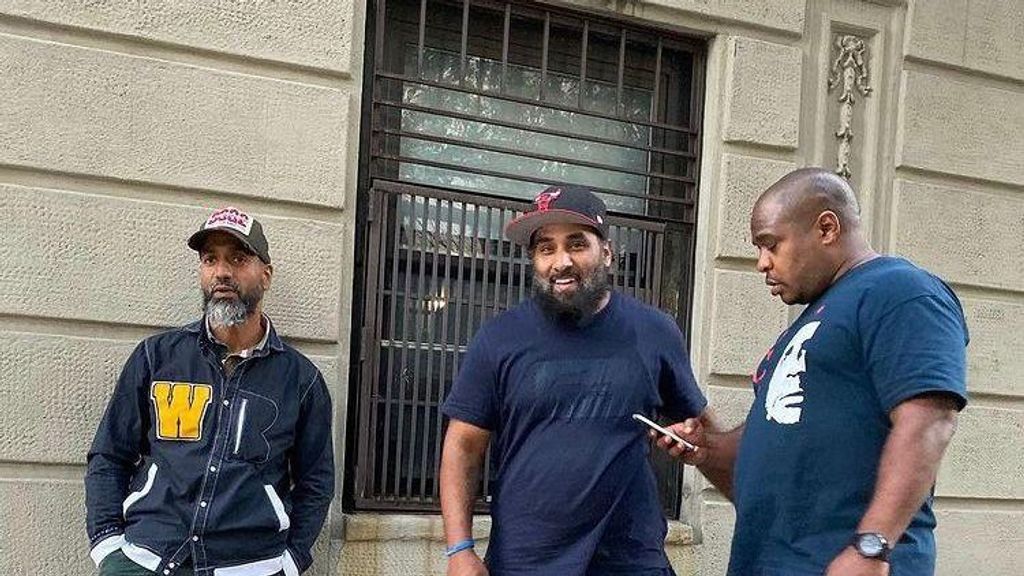 Chango, left, and friends Tito and Shorty Roc. “The things that were once OK with me aren’t OK with me anymore,” Chango says. “That allows me to meet different people and have compassion and not judge people.” (Courtesy of Chango)

Former Yellow Top Crew leader Chango fully understands the terror he caused in New York during that group’s run of street supremacy in the ‘80s and ’90s. Nothing was sacred, and life was all about the mighty dollar, by any means necessary.

The consequence of that lifestyle has always been death or jail. As they say, the streets are undefeated. For Chango, that translated into spending 15 years of his life behind bars. Prison made him both homicidal and suicidal at times, a battle he still fights daily.

All wasn’t lost in prison, as Chango was an integral part of several positive programs there. More importantly, he became acquainted with the actual Central Park rapist, Matias Reyes, drawing a confession out of him, which led to the five young men falsely accused of the rape being released from prison.

In a 2012 documentary, “The Central Park Five,” however, about the crime and its aftermath, Chango didn’t receive any credit or mention. That’s kind of what life has been like for the former drug kingpin, a lot of ups and downs, highlights and lowlights.

But his mission to clear his name and produce more positive results than negative has been relentless.

In the first part of Zenger’s conversation with Chango, he discussed “King Of Swag” Alpo Martinez being killed in Harlem, among other topics. In this second part of that interview, Chango talks about Kyle Rittenhouse’s acquittal, why he tried to drink himself to death, and more.

Zenger: As someone who’s tangled with the justice system, any thoughts on Kyle Rittenhouse’s high-profile acquittal on homicide and reckless endangerment charges?

Chango: I think it’s dope, bro. For one reason, I’m not a fan of his, I’m not a fan of anything that he was doing, but I’m a fan of somehow the justice system worked. That’s what should have happened when you take everything into consideration. How am I going to have three dudes chasing me around, I’m running in the opposite direction with a gun, but at some point, I gotta turn around. And if you’re still running toward me, I have to put something in you. It’s simple. You see how you stopped running after me. Now you know. You should’ve left me alone when I was running.

My other opinion is, that acquittal would have never happened if he was black or brown. I can be happy for him, but I gotta shake my head, too. I know plenty of dudes upstate doing time for things they didn’t do. Shout out to Cory Jackson. He’s been in prison since he was 15. He got a hundred to life, he’s 32 years in. He’s never even had a girlfriend. He got set up by a corrupt cop that I know, and I’m trying to help him. That detective shot himself in the head. No legit detective that is doing everything that you’re supposed to, that climbed the ladder to the most elite task force in Manhattan, the richest county, will shoot himself in the head. It don’t happen like that.

Chango: The answer is suffering, bro. When you’re in a cell and you’re plotting to kill yourself, and you’re calling your mother trying to check on her health, so that if it’s deteriorating enough, you can start your mission. It messes your mind up, even if you don’t end up doing it. To plot on yourself and constantly trying to figure out the best way to do it… should I stab this dude and let the guard shoot me from the tower? Do I do this or do that? I never did drugs, so suicide by overdosing didn’t sit right with me. I cared that my mother knew that I never used drugs. I told her, if I OD because I buy a bunch of dope in prison, that would raise doubt in the person I love the most. Then I decided I couldn’t cut my wrist because that would hurt my mom more at the funeral. Years of just trying to figure out the best way to do it.

When I came home, I elected to do it through poisoning. But what I picked was liquor. I was addicted to that for five years. I was wondering when it was going to happen. I’m drinking a big bottle of Hennessy during the day; at nighttime I’m drinking some Grey Goose or Belvedere. I’m hanging out with everybody in clubs, I’m with women, and nobody knows what I got in my hand is what I’m using to try and depart, erase myself from out here. It took going through the lows of that for me to say, “I gotta go in a different direction.” That’s where I’m at. I just started putting all my stuff together to try and sell my movie, putting stuff together to sell a docu-series, and now I have positive things to look forward to.

I got a job as an apartment building superintendent on Wall Street. I met a lot of important people there, I get love from there, so I have things to look forward to. I learned when you changed the way you look at things, the things that you’re looking at change too. I work six days a week. I ain’t happy about it, but I also flip homes. So, I’m working while I try to sell this current house that I’m just remodeling.

I don’t hang out with the old crew, unless it’s my immediate top-tier co-defendants. They are legit. You could be calling your friends about one thing, but whatever they into, their phone is tapped, you’re involved too. I’m not trying to be in that position either. When you change the people you hang out with, different things become important. That’s how I changed my mentality. Rehabilitation is in the mind, so it’s up to you to change. Nothing around you needs to. I had to cut back on a lot of things and the things I cut back on makes you better.

I meet people now and make them laugh, and that’s a new friend. I’m not going to be friends with drug dealers anymore, because drug dealers are really nobody’s friend. We can all respect or acknowledge Alpo, but I wouldn’t introduce him to my sister if I still had one, because I know that he don’t appreciate women. We can either get rid of the junk that’s been put in our minds from the beginning, or we can keep it in there. I’m just trying to empty my mind of all that. When I see somebody bullying people&mldr; the things that were once OK with me aren’t OK with me anymore. That allows me to meet different people and have compassion and not judge people.

Zenger: That’s how you got to know the real Central Park rapist, right?

Chango: That definitely allowed me to meet the Central Park rapist [Matias Reyes] before anybody knew he was a rapist, and before I brought him out to the public as that, and that’s before I helped to get the Central Park Five exonerated. If I would have had the mentality I had before, I would’ve never been able to become friends with the actual guy that raped that lady. And if I didn’t do that, he wouldn’t have had the confidence to ask me for help, and I wouldn’t have been able to reach out to my lawyer, Lynn Stewart, in order to get it on record.

Those five guys were cleared. But if I would’ve had the same mentality before, I would’ve been like, “I don’t care.” Instead, I was able to make a difference, a big difference. For a long time, they were looked at as guilty and that’s it. Now, if I had to do that over I wouldn’t because I got no appreciation for it, and I’m big on appreciation. I’m glad I did it, but I wouldn’t do it again.

Zenger: I loved when you said, you no longer live for Friday nights, you live for Saturday mornings.

Chango: Look when we’re talking, Saturday morning. If I was out clubbing all night, I would be sleeping still. I wouldn’t be waking up until 3 in the afternoon.

Chango: Brother, I just want to be remembered as the guy that made a change. I’m constantly doing things in order for those things to be remembered later. They’re anonymous, but later so that they can prove change. I want people to say, “If he turned it around, I can turn it around.” Listen, you can come back from alcoholism, bankruptcy, flat lining, war, drug addiction, prison, terminal diseases &mldr; you can come back from anything, as long as we want to. When you want to, you can make a change.

I don’t want to be on the street no more. I want to do something better for myself. Personally, I’m trying to clear up all the negative things attached to my name, as much as possible to neutralize it. When my son Googles me, he has both sides. He’s only going to know one side of me, he will know the past, but he will also know that his father changed and is this way. He will know we stopped and gave people money on the street, we bought food to give away, we went to Puerto Rico and helped people there. I’m proud of that, and that’s what I hope to be remembered by.

«Previous Post
US-Born Black Women At Higher Risk Of Preeclampsia During Pregnancy Than Those Who Immigrated»Next Post
Unfinished Business: Linton Vassell Wants To Avenge Losses Against Bader Or Moldavsky For Title