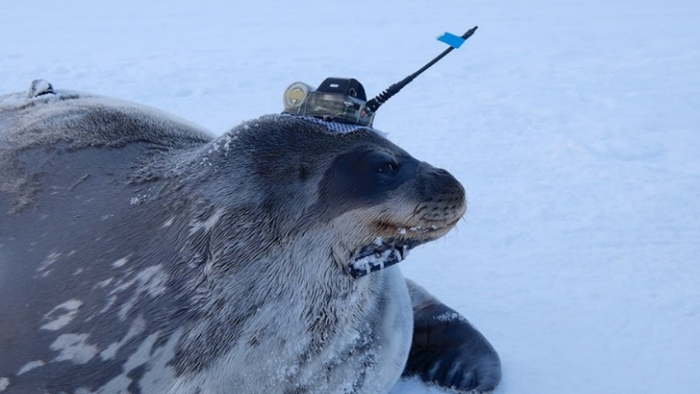 Weddell seals were fitted with sensors that transmitted data on the depth, conductivity and temperature of the water in the Antarctic Ocean. (Nobuo Kokubun)

Inventive oceanographers glued sensory instruments onto the heads of Antarctic seals to record temperature changes on the continental shelf around the frozen continent.

Some of the most biologically productive regions of the world’s oceans surround the southernmost continent. The Antarctic Ocean is noted for prolific phytoplankton on which a variety of animals rely. Tiny shrimp-like krill swarm in Antarctic waters by the millions, providing food for whales and fish. In turn, penguins and orcas feed on other sea life supported by the plankton in these waters.

The authors of a study published in the journal Limnology and Oceanography sought to describe how interactions between ocean, sea ice, and ice shelf generate such large amounts of nutrients and biological diversity. But it is difficult to get data on the Antarctic continental shelf while aboard ships obstructed by ice attached to the shore.

Coastal areas of open, unfrozen seawater, known as polynyas, are surrounded by sea ice. The sea ice attached to the shore, known as landfast ice, is an ideal hunting spot for predators including native Weddell seals (Leptonychotes weddellii) and emperor penguins.

To understand the exchanges of sea-ice, ocean and ice-shelf water outside the polynyas, scientists deployed data-logging equipment on Weddell seals.

The exchanges of seawater, particularly from deep, warm off-shelf areas, seasonal sea-ice zones and coastal polynyas, may be important in biological production across the continental shelf.

The data-logging device that Kokubun and his colleagues attached to the Weddell seals recorded conductivity, temperature and depth to understand the characteristics of the ocean throughout the water column while the seals swam, allowing scientists to estimate the origin of the waters.

From March to September 2017, eight Weddell seals bore data loggers weighing about one pound each and roughly the size of a small Rubik’s Cube. The areas were chosen for their extensive landfast ice and lack of vast continental shelves or distinct coastal polynyas.

Based on the data gathered, the scientists discovered that warm water with low salinity appeared in the subsurface during autumn and went deeper as the months passed. Using meteorological and oceanographic modeling, they found that prevailing easterly winds during autumn cause a flow of warm surface water from the continental shelf, which possibly also brings prey for the seals.

Weddell seals are apex predators that dive as deep as 1,800 feet in search of prey, such as cod and silverfish. They also eat various cephalopods, such as squid, to add to the 110 pounds of prey an adult eats in a day. While they are safe on landfast ice, in the water Weddell seals face predation by orcas and leopard seals.

The research team found that using oceanographic sensors on seals opened up large areas beneath landfast ice for studies of the continental shelf and its rich biodiversity. With further research, the team aims to determine the amount of water and prey being brought to the continental shelf by wind-driven processes to predict how the Antarctic marine ecosystem responds to rapid changes in sea ice.