With COVID-19 ravaging NBA rosters, many G Leaguers are getting a chance to prove their worth with big minutes at the NBA level. 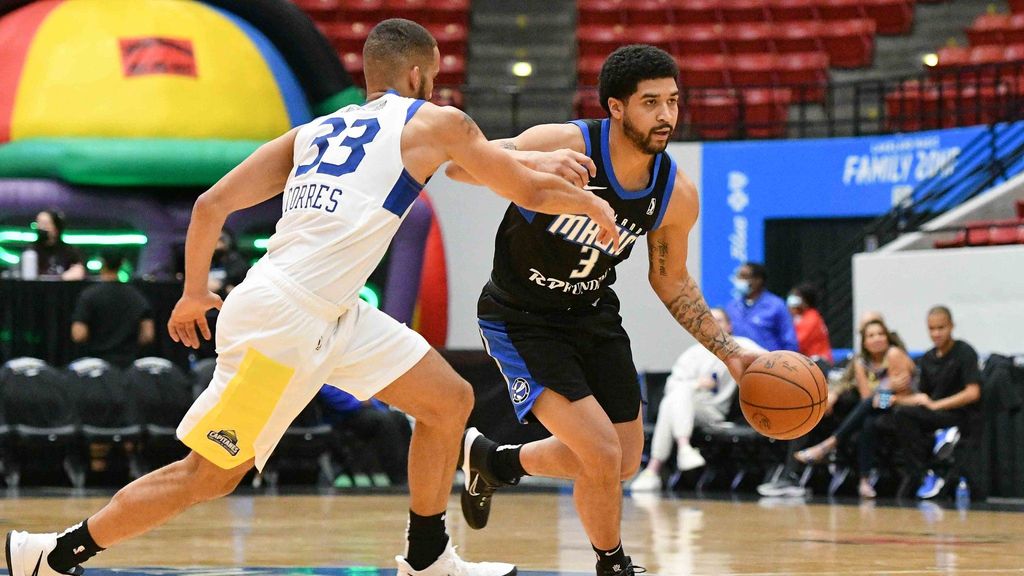 With 30 percent of league out on COVID protocols, G-leaguers have a much better chance of being called up. Pictured, G League teams Lakeland Magic vs Mexico City Capitanes in Lakeland, Florida, on Nov. 11, 2021. (Tom Hagerty/CC BY 2.0)

Every December, hundreds of fringe NBA players flock to Las Vegas for the G League Showcase in hopes of impressing NBA decision-makers and earning a roster spot.

More than 60 players have earned a call-up during or immediately after the last 16 G League Showcases, and the event has featured NBA veterans like Clint Capela, Seth Curry, Robert Covington, Patrick Beverley and Hassan Whiteside among others.

This year, due to COVID-19 ravaging NBA rosters, many players who would’ve normally relied on the G League Showcase are instead getting a chance to prove their worth in actual NBA games — and get paid way more in the process.

That’s because over 145 players are currently in the NBA’s health and safety protocols, meaning one-third of the league is sidelined at the moment. This month, 187 players have entered the NBA’s COVID protocols at some point. As a result, 541 players have appeared in at least one NBA game this season, which is a new record just two months into the 2021-22 campaign.

While this has certainly hurt the NBA’s on-court product, caused all trade talks to pause and created a headache for all 30 teams, it has also presented a golden opportunity for G Leaguers — who have a chance to perform on basketball’s biggest stage and leverage their play into a longer-term contract and lucrative payday.

Nearly 70 G League players have already received call-ups — that number will doubtlessly only continue to rise in the coming weeks.

Typically, 10-day players and G League call-ups are trying to show what they can do in limited minutes. However, these players are now sometimes stepping into significant minutes right off the bat. Some team may discover a diamond in the rough during this stretch; it’s possible that the next Fred VanVleet, Jeremy Lin, Robert Covington or T.J. McConnell is on the verge of being discovered.

This is also huge for older players who had largely been written off by NBA teams. From Isaiah Thomas to Lance Stephenson to C.J. Miles, many once-notable players have resurfaced as a result of the COVID absences. Will one of them shine and earn a multi-year deal (a la Carmelo Anthony in 2019-20)?

For the fringe NBA players who haven’t received a call, this period must be difficult. They likely thought an NBA comeback was still a realistic possibility, but not getting a chance when more than 30% of the league is sidelined has to be a humbling reality check.

This will surely go down as one of the strangest NBA seasons in memory, but for some of the replacement players, this could end up being their big break.