The Dominant Warriors May Have Created A Klay Thompson Conundrum

After nearly three years, Klay Thompson is inching toward his return. He and the Warriors will need to adjust to a few changes. 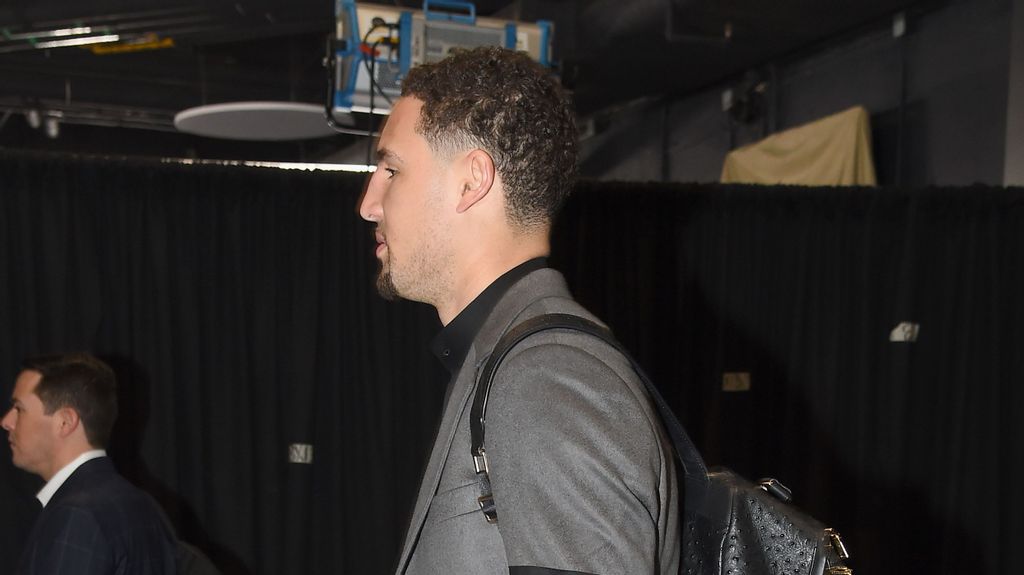 One can’t help but to wonder whether the Warriors have been so good without Klay Thompson that they’ve created a conundrum. (Jayne Kamin-Oncea/Getty Images)

Thus far this season, Golden State Warrior losses have been a lot like blue moons — seldom seen, and as a result, quite conspicuous.

Notwithstanding the team’s 89-86 loss to the Denver Nuggets on Tuesday night, the Dubs have been the NBA’s best team this season. They enter play on Dec. 29 with the league’s top record of 27-7 and the second-best plus-minus (+10) among their peers. They also happen to lay statistical claim of being the best defensive team in the league, as they allow the fewest points per game (100.9) and yield the fewest points per 100 possessions (102.1).

Offensively, they’ve been led by Steph Curry, who, in case you haven’t noticed, is doing big things.

With the other half of the Splash Brothers lurking in the shadows, one can’t help but to wonder whether the Warriors have been so good that they’ve created a Klay Thompson conundrum.

The assumption has always been that Golden State would become a better team once Thompson returns to the lineup, but, in the words of Jay-Z…

How you gon’ upgrade me?

What’s higher than number one?

Nothing immediately comes to mind.

That the Warriors have arrived here is a surprise — at least to yours truly. Their championship window seemed to be closing as their core aged out, but a reinvigoration of youth and their development has changed everything.

A combination of an improved Curry and a rejuvenated (and effective) Draymond Green have anchored a team that has seen auxiliary pieces like Andrew Wiggins, Jordan Poole and Damion Lee become fairly efficient shot-makers who compete defensively.

Wiggins, in particular, has found his game in California.

With players shuttled in and out of the lineup, Golden State’s appreciable depth has been on display. Otto Porter Jr., Andre Iguodala, Gary Payton II and Juan Toscano-Anderson have each played impactful minutes when called upon, and the recurring theme for the Warriors has been finding ways to win.

And again, all of this has occurred without Thompson.

As a player — assuming he can revert to form — Klay should be expected to regain his place in the rotation and help the Warriors on both ends of the floor. At least on paper, adding a talent like him, with his specific gifts, could make the Warriors virtually unbeatable.

Nonetheless, it’s interesting to comprehend just how good the team has been without him, and why.

Keeping Up With The Canadians 🇨🇦

According to 82games.com, the team’s best five-man unit is Curry, Poole, Wiggins, Green and Looney. The quintet has played 264.5 minutes together, boasting a net-rating of +21 and outscoring opposing five-man units 65% of the time.

The second-best combination replaces Looney with Porter. The group has played only 36.6 minutes together, but has a net rating of +15 and has outscored opposing five-man units 55.5% of the time. Others deployed by Kerr have smaller sample sizes, meaning that these two lineups are the ones he relies upon most heavily.

What becomes evident from these two, however, is that both Poole and Wiggins have been instrumental to the Warriors’ success — and that is a pair whose minutes will be reduced most dramatically once Thompson returns.

Klay is best as a catch-and-shoot player, so it’s easy to imagine scenarios where he’s playing alongside Poole. It’s also easy to imagine five-man units where Green plays center with Curry, Poole, Thompson and Wiggins.

The last time Thompson played in an NBA game, Kevin Durant was still his teammate. Wiggins was in Minnesota, and had only recently been separated from Tom Thibodeau and Jimmy Butler. Poole was a sophomore Wolverine at the University of Michigan whose hoops dreams had yet to fully materialize.

Assuming he is able to take the floor at some point before the All-Star break, it will have been nearly three years since Thompson last set foot on an NBA court. Many things, including those he will call teammates, will have changed. So too may be the extent upon which the Dubs will rely on him.

There’s no reason to believe that either Thompson or the Warriors will have any issue reincorporating the other, but there’s no question that Klay will be hungry to prove that he is still as capable a player as he was when we last saw him.

When he takes the court for the first time, Klay will have seen all but five of the teammates he last played with replaced. Curry, Green, Looney, Lee and Iguodala will be the familiar faces.

There will only be one constant — the Warriors will still be the bully on the NBA’s block.

Only this time, they will have attained that status without Klay.

Sure, Poole, Wiggins and the rest of the team’s pieces may willingly yield back the reps and shots they earned by scratching and clawing their way through the rotation. But just as they will have to get used to the idea of yielding to Klay, he too will have to accept the fact that 2019 was a long time ago.

In some ways, it’s good. In most ways, in fact.

But in others, it’s a conundrum.

The Klay conundrum — perhaps the league’s most interesting storyline as we head into 2022.