The face of Amenhotep I was covered by a fine mask, inset with jewels. 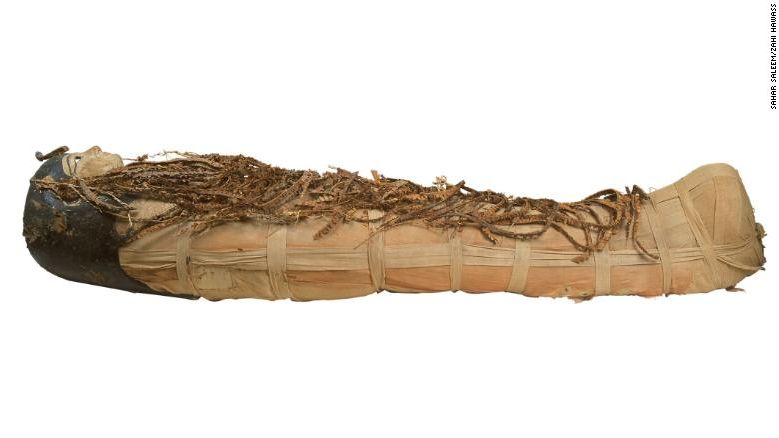 The mummy of Amenhotep I was discovered in 1881 but never unwrapped by Egyptologists. Using CT scanning, modern Egyptologists have digitally unwrapped the mummy, revealing a jeweled facemask. (Zahi Hawass, Sahar Saleem)

Until now, no Egyptologist has dared to gaze upon the visage of Pharaoh Amenhotep I, who died about 3,500 years ago. But with modern technology, archeologists digitally “unwrapped” the mummy of the ruler, using noninvasive 3D computed tomography (CT) scanning to peer at the monarch and the splendid artifacts that accompanied him into the afterlife.

In a paper published in Frontiers in Medicine, co-authors Sahar Saleem of Cairo University and famed archeologist and media personality Zahi Hawass described their methods, the lifelike mask featuring inset stones covering the monarch’s neck and face, and the perfectly wrapped corpse.

The only other time that the face of Amenhotep I had been revealed was 400 years after his death when priests of the 21st Dynasty restored and reinterred royal mummies after their desecration by thieves. All other mummies discovered in the 19th and 20th centuries have been unwrapped for study by experts, according to the authors.

“The fact that Amenhotep I’s mummy had never been unwrapped in modern times gave us a unique opportunity: not just to study how he had originally been mummified and buried but also how he had been treated and reburied twice, centuries after his death, by high priests of Amun,” said Saleem, a radiologist who serves on the Egyptian Mummy Project.

By peeling off the mummy’s layers digitally, she said, the well-preserved remains could be studied in “unprecedented detail.”

At the time of his death, Amenhotep I was about 35 years old and approximately 5 feet 6 inches tall, Saleem said. In addition, he was circumcised and displayed healthy teeth. “Amenhotep I seems to have physically resembled his father. He had a narrow chin, a small narrow nose, curly hair and mildly protruding upper teeth,” Saleem said.

The CT scan did not reveal any wounds or disfigurement due to disease that could give the experts a clue as to the cause of death. During the process of mummification, the embalmers removed his brain and heart. Grave robbers may have disfigured the mummy following his first burial.

Discovered in 1881 in the company of other reburied royal mummies, the Amenhotep I mummy was found in a cache at Deir el Bahari in southern Egypt. As the heir of his father Ahmose I, Amenhotep I was the second pharaoh of the 18th dynasty. He ruled from approximately 1525 to 1504 B.C. after the deaths of his elder brothers.

During his reign, Egypt saw prosperous and secure times. As pharaoh, he led successful invasions of Libya and northern Sudan. In death, he and his mother Ahmose-Nefertari were deified.

In years past, both Saleem and Hawass had theorized that the purpose of the 11th-century B.C. restoration was to reuse royal burial offerings for later pharaohs. However, their latest study proved them wrong.

“We [found] that at least for Amenhotep I, the priests of the 21st dynasty lovingly repaired the injuries inflicted by the tomb robbers, restored his mummy to its former glory and preserved the magnificent jewelry and amulets in place,” said Saleem.

Saleem and Hawass have examined more than 40 royal mummies of the New Kingdom, the period between the 16th and 11th centuries B.C. Of these, 22 mummies, including that of Amenhotep I, were transferred this year to a new museum in Cairo.

“We show that CT imaging can be profitably used in anthropological and archeological studies on mummies, including those from other civilizations, for example Peru,” Saleem and Hawass wrote in the study.