Beheaded horse found alongside ancient warrior in his grave surrounded by jewelry and weapons. 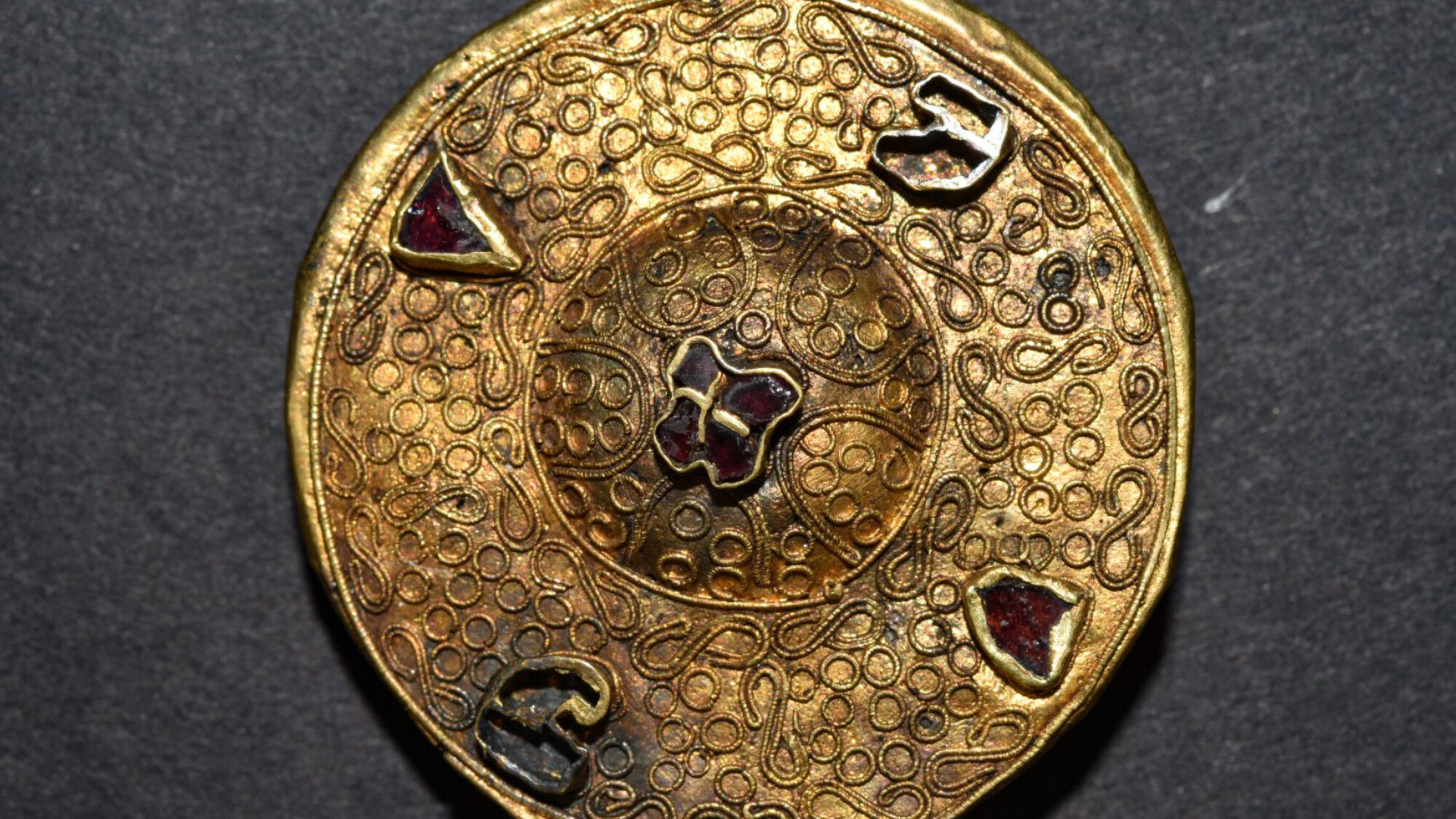 The pictured filigree gold disc brooch was recovered from a woman's burial in an early 7th century cemetery in the town of Knittlingen in the southern German state of Baden-Wuerttemberg. (State Office for the Preservation of Monuments in the Stuggart Regional Council/F. Damminger/Zenger)

A team of archeologists has discovered a decapitated horse next to its rider and a trove of jewelry and weapons in a cemetery where elite Merovingian nobles and warriors were buried.

The Merovingians were a Frankish dynasty that ruled from the middle of the 5th century until 751. Their kingdom included all Franks, which were Germanic tribes, and the northern Gaulish Romans. It grew, as the Roman Empire crumbled, to encompass much of modern-day France, stretching eastward into what are now parts of Germany and Switzerland.

The archeologists had been working in the town of Knittlingen, in the southern German state of Baden-Wuerttemberg, examining more than 110 graves in a cemetery reserved for members of the local Merovingian elite.

“The comparatively rich burials in the second half of the sixth century are noteworthy in Knittlingen,” the Regional Council of Stuttgart, which has been overseeing excavations at the dig site since August, said in a statement.

“The grave structures ranged from simple burials to wooden grave chambers. Only the last remains of wood were preserved. Some deceased were buried in wooden coffins,” the statement said.

Folke Damminger, the State Office for Monument Preservation officer in charge of the area, said the discoveries provide key indications regarding the social status of the deceased.

“The deceased of the Knittlinger settlement community were buried in their traditional costumes according to the early medieval custom,” the Stuttgart Regional Council statement said.

“Although the burials were often robbed in the early Middle Ages, numerous non-organic jewelry components such as pearl necklaces, fibulas (clasps), earrings and arm rings as well as belt hangers with decorative discs, everyday utensils (knives, combs) and objects with amulet character could be recovered from the graves of women and girls.”

A woman was found buried in “almost complete fibula outfits typical of the time,” according to the statement. However, “a gold disc brooch worn individually from a somewhat younger grave heralds the fashion of the seventh century. Some of the men’s graves identified the deceased as cavalrymen.”

As for the decapitated horse, it “was buried in the vicinity of one of these burials.”

Swords and shields were also among the recovered items.

“Parts of the weapons equipment (swords, lances, shields and arrowheads) together with the associated belts come from the male burials. Ceramic vessels added regardless of gender and age of the dead probably contained food additions,” the statement added.

The archeologists were able to determine this because the vessels contained eggshells and bones.

The artifacts and skeletal remains have been secured for further study, with the excavation expected to be completed in early 2022.