After pushing a different button than she had intended on the vending machine, she hit the jackpot.
By Lee Bullen December 28, 2021
Facebook
Twitter
Linkedin
Email 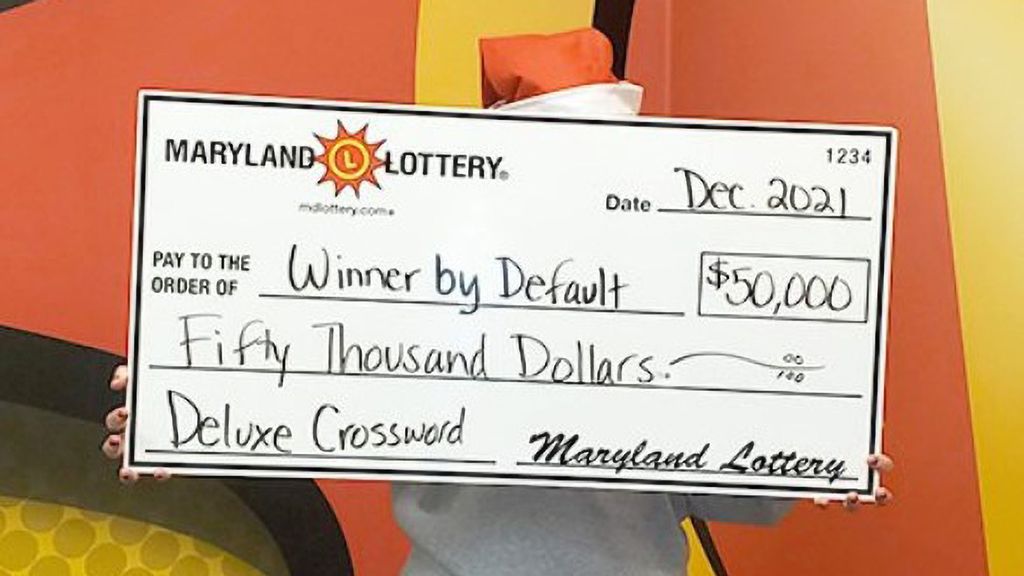 A mock check shows the winnings of a scratch-off lottery ticket for a woman who chose the alias “Winner by Default” after she accidentally punched a button on a lottery vending machine for a different ticket than the one she had intended to buy. (Maryland Lottery/Zenger)

“Luck Be a Lady Tonight,” made famous by Frank Sinatra, might very well be a Maryland woman’s new favorite song.

The 43-year-old, who is using the alias “Winner by Default,” won the $50,000 top prize playing the Deluxe Crossword game, though she had intended to buy a different Maryland Lottery $20 scratch-off game out of a self-service lottery vending machine.

“I was like ‘dang’ when that ticket came down,” said the winner, according to a statement from the Maryland Lottery. “I don’t even typically like the Crossword games, but this worked out well.”

“Reluctantly, the winner grabbed the ticket and went home to scratch it. The single mom of three sat down and began the process of revealing the words on her crossword ticket,” the Maryland Lottery said in its press release.  “After scratching the whole ticket, she believed she won something and read the directions to confirm. Still not sure, she decided to scan the ticket using the Lottery’s app on her phone.

“She was shocked at the message staring back at her, “Congratulations — $50,000 Winner.”

“It was unreal,” the woman said, as reported by the Maryland Lottery.  “I thought something was wrong with the app, so I scanned it again.”

“Sure enough, the same message appeared,” the Maryland Lottery said. “After jumping up and down and screaming, the big winner called her children down to share the news.”

The woman said she put the ticket on the counter and scanned it again so her children could see the winning message. “They couldn’t believe it was real,” said the woman, who works as a service manager for an HVAC company.

The woman made an appointment to claim her prize at Lottery headquarters. The Maryland Lottery said the woman told lottery officials that she just bought a new home and plans to use some of the winnings for home renovations. She said she plans to put the rest in the bank.

The winning Deluxe Crossword game was purchased at Halfway Liquors in Hagerstown. The retailer will receive a $500 bonus for selling the winning ticket, which is 1 percent of the top prize won, the Maryland Lottery said.