Toothy Cymbospondylus youngorum was the largest creature on land or sea during the mid-Triassic period. 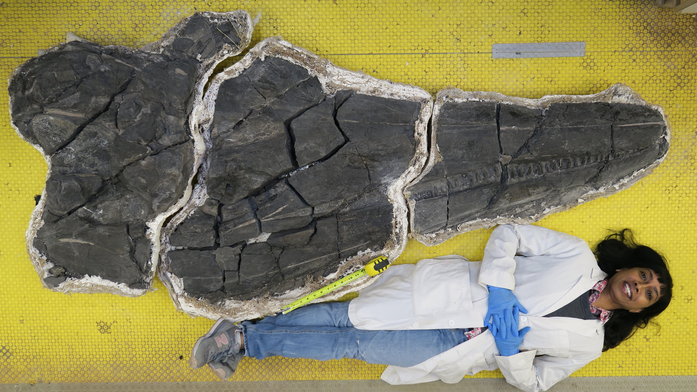 The skull of a fishy reptile discovered in a Nevada shale bed is the oldest known example of an ichthyosaur reaching an epic size. How swimming reptiles developed gigantic proportions and streamlined shapes to rule the waves millions of years ago offers insights into the evolution of modern whales, researchers say.

“Ichthyosaurs derive from an as yet unknown group of land-living reptiles and were air-breathing themselves,” said paleontologist Martin Sander of the University of Bonn, Germany, who is also associated with the Natural History Museum of Los Angeles County.

“From the first skeleton discoveries in southern England and Germany over 250 years ago, these ‘fish-saurians’ were among the first large fossil reptiles known to science, long before the dinosaurs, and they have captured the popular imagination ever since,” he said.

Giant ichthyosaurs and other aquatic reptiles were not dinosaurs, though they lived alongside them. Like modern whales and dolphins, ichthyosaurs were hydrodynamic and had fins for swimming.

The newly discovered ichthyosaur was excavated at the Fossil Hill Member formation in Nevada’s Augusta Mountain range. Dubbed Cymbospondylus youngorum, it is the biggest animal ever found on land or sea from the Middle Triassic age, about 247 million to 237 million years ago. Paleontologists excavated its massive skull, as well as a shoulder, fore fin and vertebrae.

C. youngorum was the size of a modern sperm whale, or cachalot, measuring more than 55 feet long. It is the first giant creature to live on Earth and developed its giant size faster than whales.

Paleontologists have been working at Fossil Hill Member for about 120 years, discovering remnants of ancient life in sedimentary shale, siltstone and limestone. Apart from sea-going reptiles, various species of ammonites, shelled mollusks that preceded modern cephalopods such as octopus and nautilus, have been found.

C. youngorum was swimming in the Triassic oceans about 246 million years ago and only 3 million years after its ancestors first set out to sea. According to the authors of a study appearing in Science, this was an amazingly short time for it to super-size.

With its long snout and sharp conical teeth, C. youngorum may have hunted fish and squid and preyed on juveniles of its own species. The study’s co-authors used computer models to calculate that the ancient marine habitat could support giant carnivorous ichthyosaurs of various survival strategies and diets. Modern cetaceans range from the biggest animal ever, the toothless filter-feeding blue whale that eats tiny shrimp-like krill, to squid-hunting sperm whales, seal-hunting orcas and the smaller fish-eating dolphins.

Study co-author Eva Maria Griebeler of the University of Mainz in Germany conducted the modeling and said the ancient environment’s ability to sustain the largest ichthyosaurs may have been less than suggested by their findings in the field. During the Mesozoic Era (252 million to 66 million years ago), comprising the Triassic, Jurassic and Cretaceous periods, “modern highly productive primary producers [e.g., plants] were absent in Mesozoic food webs and were an important driver in the size evolution of whales.”

Ichthyosaurs and whales have similar body shapes reflecting mass extinctions at different times. Each class of these animals reached its giant size independently. While ichthyosaurs had an initial boom to super-size, cetaceans took much longer to obtain such a large mass.

The study found a link between large size and hunting and between large size and loss of teeth. In the case of ichthyosaurs, their surging size may have been due initially to a similar boom in ammonites and eel-like conodonts that thrived after the mass extinction event at the end of the Permian period, just before the Triassic, about 252 million years ago.

The study found that ichthyosaurs and cetaceans each exploited niches in the food chain that resulted in their giant size. “As researchers, we often talk about similarities between ichthyosaurs and cetaceans but rarely dive into the details. That’s one way this study stands out, as it allowed us to explore and gain some additional insight into body size evolution within these groups of marine tetrapods,” said study co-author Jorge Velez-Juarbe.

The discovery of C. youngorum and the fauna at Fossil Hill Member are “a testament to the resilience of life in the oceans after the worst mass extinction in Earth’s history,” he said.

«Previous Post
Alien Mist-ery: Lifeforms Could Be Living In Clouds Above Venus»Next Post
Controlled Burns May Lock In More Carbon Than Planting Trees