Alien Mist-ery: Lifeforms Could Be Living In Clouds Above Venus

Ammonia in the atmosphere could be caused by alien life, says new study. 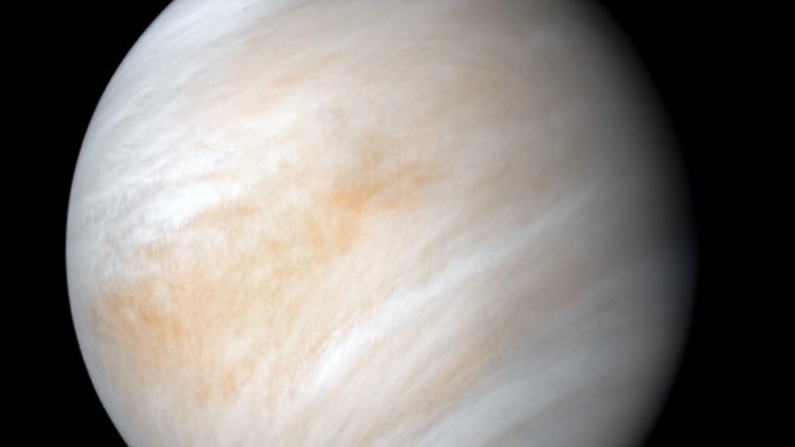 NASA's Mariner 10 spacecraft produced an image of Venus, which is about the size of Earth. Wrapped in dense, acidic clouds, Venus is intensely hot and has a crushing atmospheric pressure. A new study suggests that ammonia detected in the atmosphere could come from life forms in the clouds. (NASA/JPL)

The fiercely inhospitable environment of Venus may be undergoing moderating change due to lifeforms in its clouds making the planet more habitable.

For decades, scientists have sought to understand strange phenomena observed in the planet’s upper atmosphere, including the presence of ammonia. According to a study published in Proceedings of the National Academy of Sciences, any ammonia present in the Venusian atmosphere should not have been produced by any chemical process known for the planet.

Experts modeled chemical processes to demonstrate that if ammonia is found on Venus, it could produce chemical reactions to neutralize the surrounding droplets of sulfuric acid.

This could increase the clouds’ pH from about -11 to 0. This is still an acidic environment but within the range to sustain life. On Earth, there are living things that produce ammonia, which neutralizes acidity and produces a livable environment. Such lifeforms, for example, live in the human stomach.

“We know that life can grow in acid environments on Earth, but nothing as acid as the clouds of Venus were believed to be. But if something is making ammonia in the clouds, then that will neutralize some droplets, making them potentially more habitable,” said the study co-author William Bains of Cardiff University.

With a surface hot enough to melt lead and an atmosphere thick with carbon dioxide, Venus cannot support life as we know it. The clouds of sulfuric acid that blanket it are so caustic that they can burn a hole through human skin.

The scientists believe that the most plausible explanation for ammonia on Venus is a biological origin rather than non-biological sources such as volcanoes and lightning.

“Ammonia shouldn’t be on Venus,” said study co-author Sara Seager of the Massachusetts Institute of Technology. Noting that ammonia contains hydrogen, which is in short supply on Venus, she said: “Any gas that doesn’t belong in the context of its environment is automatically suspicious for being made by life.”

The scientists identified chemical signatures or anomalies in the clouds that have not been explained before. Apart from oxygen, phosphine and non-spherical particles, these included sulfur dioxide and water. The team theorized that minerals in dust kicked up from the planet’s surface and into the clouds interacted with sulfuric acid to produce the anomalies. However, they found that while the chemistry was feasible, only a massive lofting of dust into the atmosphere could cause the anomalies.

When the team thought to explain the presence of ammonia through a series of chemical processes, they determined that ammonia produced by lifeforms could yield chemical reactions producing oxygen. The ammonia would then dissolve in tiny drops of sulfuric acid. Any sulfur dioxide would also dissolve.

For the researchers, ammonia may explain the anomalies in Venus’ clouds. Referring to the planet’s challenges to life, Bains said, “There is almost no water there for a start, and all life that we know of needs water. But if life is there, then neutralizing the acid will make the clouds just a bit more habitable than we thought.”

The privately funded Venus Life Finder Missions may offer opportunities in the next few years to seek ammonia on Venus. Seager of MIT is principal investigator of the missions.

“No life that we know of could survive in the Venus droplets,” Seager said, “But the point is, maybe some life is there, and is modifying its environment so that it is livable.”

“There are very acidic environments on Earth where life does live, but it’s nothing like the environment on Venus ­— unless life is neutralizing some of those droplets,” Seager said.