Twenty cats were saved by animal activists after the homeowner moved and left them behind.
By Joseph Golder December 26, 2021
Facebook
Twitter
Linkedin
Email 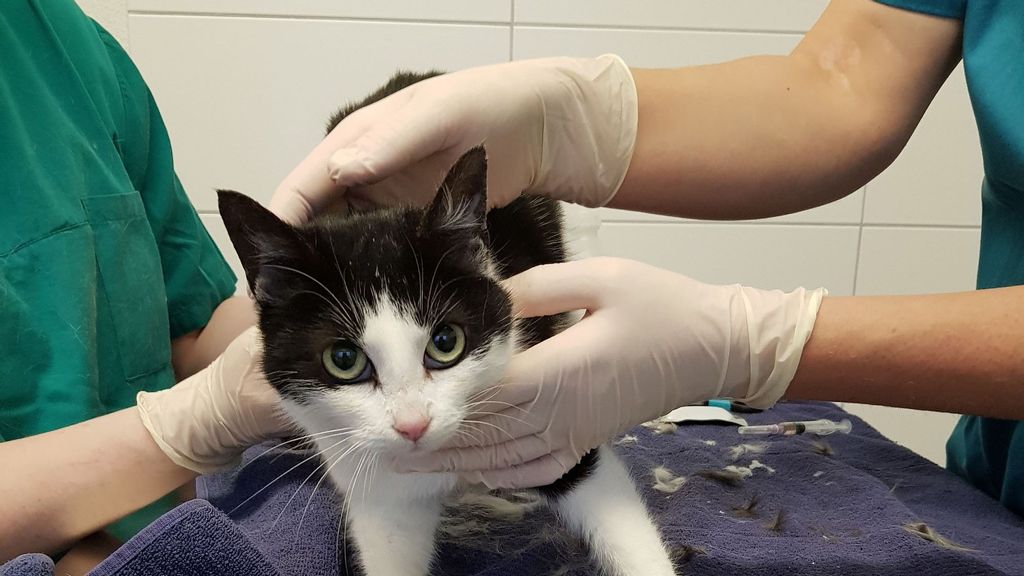 One of the cats, named Brownie, rescued by animal-rights activists in Munich, Germany. (Munich Society for the Prevention of Cruelty to Animals/Zenger)

Twenty cats were left trapped in a house — and forced to become cannibals to survive.

The incident took place in Munich, Germany, in Bavaria. Animal-rights activists from the Tierschutzverein Muenchen (Munich Society for the Prevention of Cruelty to Animals) rescued the animals from a filthy apartment on Dec. 14.

The door had reportedly been blocked with a stick, stopping the cats from getting out.

Two cat corpses were seen as rescuers entered the home.

The organization said: “The anonymous report originally received by the Veterinary Office had sounded harmless. Someone was feeding more and more stray cats, some of them looking increasingly sickly. Meanwhile, there were probably 15 to 20 animals. But the massive case of animal cruelty that was hidden behind it only became apparent on site.

“When our inspectors tried to open the door carefully, paws looking for help came toward them through the small gap. Numerous cats tried desperately to escape through the door. A massive stench of ammonia, feces and putrefaction hit the animal-rights activists.”

“Directly in the entrance area was a tray with numerous unfilled bowls, empty and closed food cans and two cat cadavers, eaten to the bone and chopped up. The floor of all the rooms in the rudimentary house was littered with excrement, and the stench was almost unbearable. The animals that did not try to escape outside hid in the back rooms.”

The organization added: “The cats reacted in a disturbed and panicked way. Although the experienced animal-welfare inspectors were very careful to catch the cats, the poor animals could hardly be reassured. The rescuers had to take turns and leave the house because the stench could not be endured for long, despite the protective masks. It’s hard to imagine how the cats must have been, having probably been locked up there for months. The perpetrator had long since moved into another building.”

The rescuers had to work in a dangerous environment, with slippery droppings and a urine-soaked floor.

“The cats, actually very clean animals, even tried to relieve themselves in the same places. Even in their desperate situation, they tried to stay house-trained,” the organization said.

“The rescuers were able to free 20 cats from the apartment and the immediate vicinity. It is uncertain where they come from. The homeowner’s claim that they were fed from the area is hardly credible. Reports, as well as numerous clean transport boxes, raise the suspicion that some of them are cats delivered from Internet platforms, as well as lost-and-found animals.”

The 20 rescued cats are now housed in the Munich animal shelter, provided with veterinary care. On the day after they were freed, many of the cats calmed down and were affectionate toward their carers. All 20 have been put up for adoption in safe homes.

“In order to be able to bear the high costs for the cats’ care and veterinary treatment (many of them have diarrhea, parasite infestations, skin and ear infections and/or runny noses), the animal-welfare association asks for donations. All donation options and further information about the work of the association can be found here.”

Kristina Berchtold, press officer at the Munich animal society, said: “The cats will not be placed abroad and, secondly, they will not be given to new families until the New Year. Until then, they must first be nursed back to health, while the possible former owners are identified.

“Those interested in adoption, which starts January 2022, should only be from our immediate surroundings (Bavaria).”

The German Animal Welfare Act prohibits harming animals unless there is a valid reason. “The aim of this Act is to protect the lives and well-being of animals, based on the responsibility of human beings for their fellow creatures.” Violating the act is a criminal offense punishable with a fine or up to three years imprisonment.