Fluoridation is not enough to prevent tooth loss and abscesses in young children. 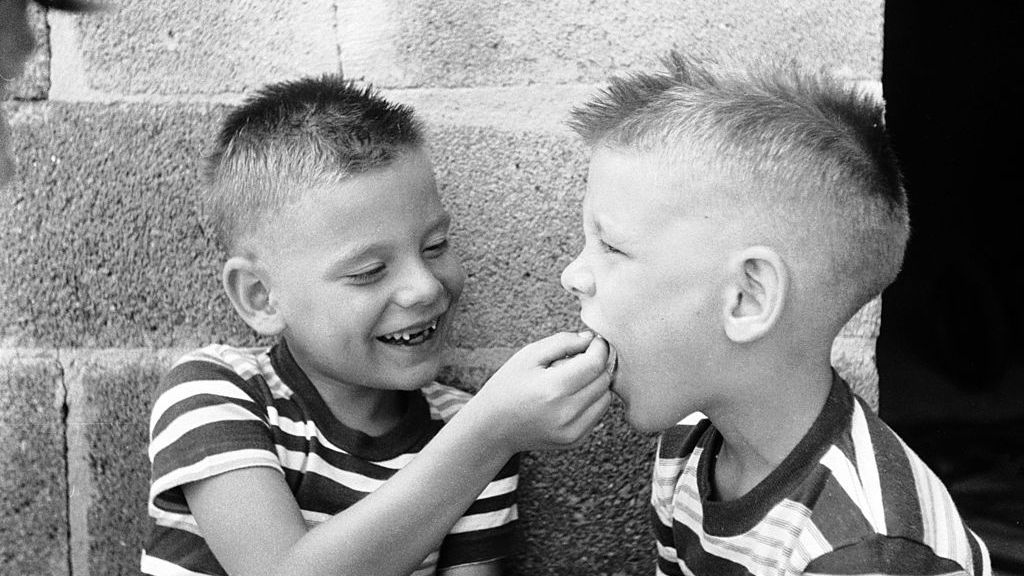 Bobby, whose two front teeth had dropped out, gives his twin brother Jerry some assistance with his loose front teeth in this photo from around 1955. Genetic anomalies and nutrition issues may be at the root of a childhood condition known as “chalky teeth,” researchers now believe. (Nocella/Three Lions/Getty Images)

Chalky, discolored teeth in children have long worried dentists and parents. An international team of researchers has now found the condition may be triggered by common childhood illnesses.

A study published in Frontiers of Physiology noted that one in five children has visibly discolored enamel, known as chalky enamel, on their teeth. For more than 100 years, researchers had sought to determine the origin of this source of severe tooth decay and toothache, which can lead to dangerous abscesses, orthodontic issues and tooth extraction.

Bernhard Gottlieb, a European physician and dentist, first studied chalky teeth in 1920 when he showed that only some parts of some teeth were affected.

Chilean and Australian researchers have now determined that this hypomineralization of teeth happens when the enamel in growing children is contaminated by albumin, which is a protein in blood and the tissue fluid that surrounds developing teeth.

They found that this condition is triggered by childhood diseases.

“The result is a sort of ‘mineralization blockage,’ which is highly localized to the areas on individual teeth that become chalky enamel spots,” said study co-author Mike Hubbard of the University of Melbourne. “This discovery allows us to correct 40 years of medico-dental dogma which blamed defective enamel-forming cells.”

“What this dogma couldn’t explain is why chalkiness affects only one or a few teeth in a child’s mouth,” Hubbard added. “We’ve shown instead that albumin leaks in occasionally at weak spots, binding to enamel-mineral crystals and blocking their growth. It’s not a system-wide problem but a very localized one.”

Chalky teeth, according to the researchers, are triggered by routine conditions such as fever. Now they want to find the underlying causes, including genetics, pathogens and environment, and then spread the word to parents, dentists and other child healthcare professions.

“We can’t yet prevent chalky teeth from developing in the first place, but if health professionals catch them early — when they first enter the mouth — then we dentists can usually save them,” study co-author Vidal Perez of the University of Talca, Chile, said.

Genetic anomalies and nutrition issues may be at the root of chalky teeth, the researchers believe. They focused on molars, having noted that they are especially prone to decay. “They are hidden away at the back of our mouths, with grooves that catch food, and they’re harder to clean,” Perez said. Hypomineralization of a tooth multiplies its tendency to decay by a factor of 10, which the team qualified as a “silent epidemic” that causes suffering.

Hubbard found that despite the fluoridation of water supplies and a significant reduction in child tooth decay, there are still children with unexplained decay. The study’s researchers found that fluoride protects against decay of normal tooth enamel but has hardly any effect on chalky molars in both developed and developing countries.

Hubbard points out that the study may lead to a strategy for addressing this global problem. “This new avenue of research could one day eliminate about half of childhood tooth decay, along with its disturbing costs to affected individuals and society,” he said.