Lions, elephants and gorillas among those receiving holiday treats. 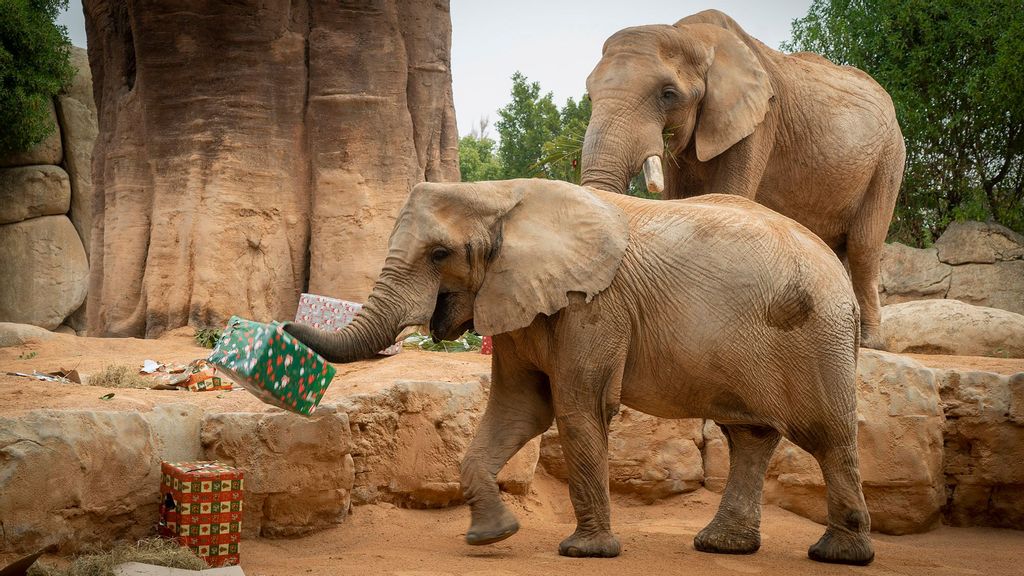 Big cats were among those getting big treats from Santa, as he made the rounds at a Spanish zoo.

Video shows the jolly fellow delivering holiday packages and tasty treats to the lions, elephants and gorillas at Bioparc Valencia days before Christmas.

“Lions, mongooses, elephants and gorillas enjoyed this special day and found gifts and many surprises in their enclosure,” Bioparc Valencia said in an online post.

“Maintaining our annual tradition, the animals at Bioparc Valencia were visited by Santa Claus.

“Some of the park’s best-known species, such as lions, mongooses, elephants and gorillas, were amazed at the unexpected, attractive and ‘delicious’ decoration they found when leaving their outdoor enclosure, as they do every morning.

“School groups and visitors at the Bioparc, including many tourists, have always shown their excitement at being able to witness this curious and anticipated event.

“It should be taken into account that these special events are organized as part of our animal welfare strategy developed by the park’s technical team. The additions to their environment stimulate the animals’ instincts, along with offering games, entertainment, and different foods.”

During the morning, th park said, Santa Claus visited the enclosures of the different animals, all decorated with typical Christmas elements.

“He carefully delivered the huge boxes of gifts in front of visitors. The herd of elephants showed their strength and impressive trunk skills to find and open each present, one by one.

“The lions were surprised to find such strange new things in ‘their house,’ but their predatory instincts and keen sense of smell made them rip open the boxes and access the tasty meat hidden inside.

“The gorilla family stirred emotion among the visitors when little Felix, Pepe and Virunga, together with their ‘older brother’ Ebo, got excited about the colorful and attractive items in their enclosure that they still haven’t stopped playing with.

“Finally, the large community of narrow-striped mongooses showed their ‘teamwork’ by sharing their appetizing gifts.”

The zoo also announced: “In addition, the park has prepared an early Christmas gift for all boys and girls aged between 4 and 12 years old — the annual child B pass. It can be obtained for free until Jan. 6 by applying on our website.”

In a similar vein, Santa recently made the rounds with treats for animals at the Australian Reptile Park in New South Wales.

The reptile park said: “Santa noted his time at the Central Coast wildlife sanctuary was his favorite trip so far but would not let his reindeer anywhere near the alligator enclosure. The feisty reptiles chased Santa out of their lagoon after he delivered their present and joked that ‘Mrs. Claus would be proud of all the exercise I have done at the Reptile Park today.’

“After a full day of spending time with the animals and spreading Christmas cheer, Santa bid farewell to the Australian Reptile Park.” And, presumably, headed to Spain!

«Previous Post
VIDEO: Howl Could You? Couple Abandons 11 Pups And Their Mom Just Days Before Christmas»Next Post
Dog Allergy Vaccine May Be Within Reach, Scientists Say