VIDEO: Two Much To Bear: Conjoined Twins Separated In 8-Hour Op Fly Back To War-Torn Yemen

The brothers were taken to Jordan for the eight-hour surgery, but have now returned to their homeland, ravaged by civil war. 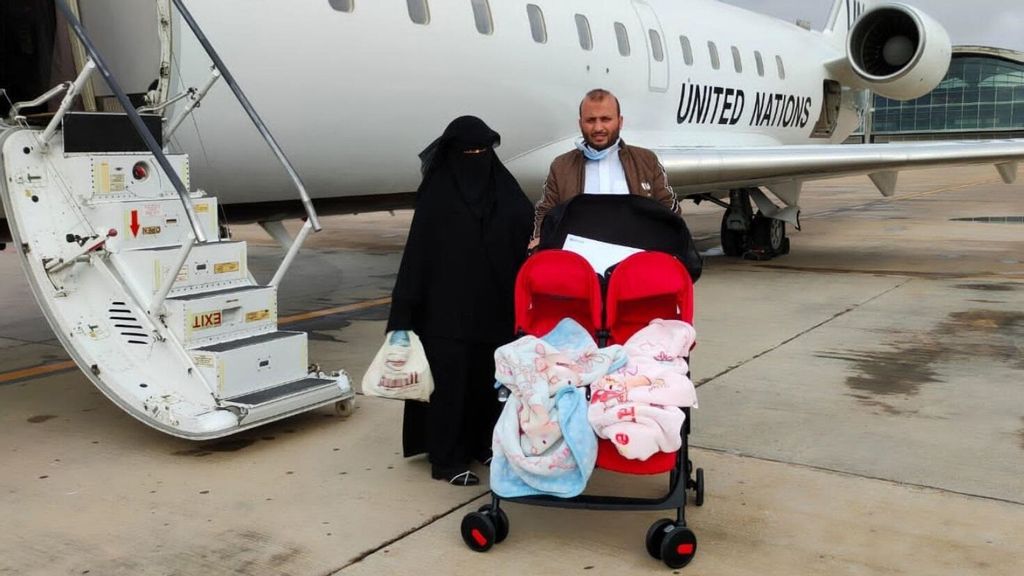 The Albukhaity family getting ready to board the plane going back to Sanaa, Yemen, after the successful separation surgery for their conjoined twins. (UNICEF, UN0565871, Fuad/Zenger)

Two conjoined 1-year-old twin boys who underwent successful surgery to separate them in Jordan earlier this year have finally returned home to Yemen.

The twins, Ahmed and Mohamed, were born at the Al-Sabeen Children’s Hospital in Sanaa, Yemen, on Dec. 16, 2020. They underwent successful separation surgery at the Specialty Hospital in the Amman, Jordan, in July.

The United Nations agency UNICEF supported both their medical evacuation and surgery. The organization reported on Dec. 20 that the youngsters returned home on a U.N. medical flight to the Yemeni capital.

The conjoined twins were joined at the abdomen and chest, and the operation to separate them lasted nearly eight hours and involved 25 surgeons and other medical staff. The boys were just seven months old at the time.

Conjoined twins occur once every 200,000 live births, according to the University of Minnesota. The majority, 70 percent, are female.

The twins’ father, Yasser Albukhaity, was quoted by the U.N. agency as saying: “I can’t express my feelings. There was a feeling of fear at the beginning, but we had great faith in Allah and in the medical team.

“Thank God the surgery was a big success. I want to thank UNICEF, the donors, the Yemeni Health Ministry, and all who provided help in this journey.

“I wish for them [the twins] to be educated like other children, to finish their higher studies, and to be of great benefit for their country in the future.”

The children’s charity covered the expenses associated with the operation, thanks to donations from private individuals.

Philippe Duamelle, the fund’s representative to Yemen, said: “This is a welcome happy ending story of one family, but millions of children in Yemen continue to suffer in silence.

“Mohamed and Ahmed return to a country where war has been raging for almost seven years. In Yemen, today more than ever, children need our support to realize their fundamental rights to health, nutrition, education, protection, as well as water, sanitation and hygiene.

“Above all, what is urgently required is peace. But until then, we need to remain mobilized to help the children of Yemen.”

Sanaa is currently occupied by the Houthis, whose Supreme Political Council is only recognized by a few countries, namely Iran and Syria. The Houthis, a Zaydi Shiite movement, have been fighting Yemen’s Sunni-majority government since 2004. They have been accused of numerous human-rights violations, including executions, forced evacuations, shelling civilian areas and using child soldiers.

«Previous Post
Oscar Shortlist For Horror Show Of How Jewish Refugees Had To Keep Nazi Defectors ‘Happy’ In US»Next Post
Dog Allergy Vaccine May Be Within Reach, Scientists Say