Evidence is mounting that rogue planets were ejected by their solar systems to wander in the dark. 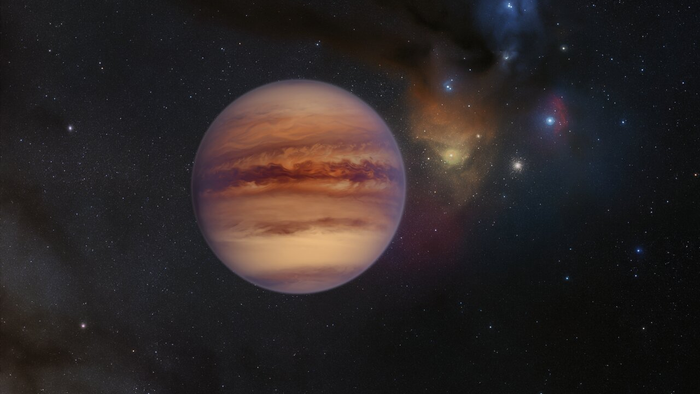 An artist’s impression of a rogue planet detected in the Rho Ophiuchi region where infrared and other imaging helped uncover at least 70 of these objects. These free-floating planets have masses comparable to those of the planets in our solar system but do not orbit a star, instead roaming freely on their own. (European Southern Observatory/M. Kornmesser)

Mysterious free-floating planets (FFPs) have long defied imaging attempts. But a team of astronomers has now discovered a way to detect them with sensitive cameras on large telescopes.

“Identifying FFPs within a star cluster is a major challenge, like finding a needle in [a] haystack,” said astronomer Núria Miret-Roig. “Stars are relatively bright and easy to spot, whereas planets are several thousand times fainter and can only be detected with large aperture telescopes and sensitive detectors.” Distinguishing rogue planets from stars and galaxies is an additional challenge, she said.

Far from any star, rogue planets are normally impossible to image. However, Miret-Roig and her colleagues found that the planets glow so hot, even millions of years after formation, that infrared cameras can capture their images. The team has found more than 70 planets with masses comparable to Jupiter’s in the Upper Scorpius and Ophiuchus constellations.

With 20 years of data and over 80,000 wide-field images from telescopes in space and on Earth, the team measured colors, luminosities and tiny motions of tens of millions of objects in space. “These measurements allowed us to securely identify the faintest objects in this region, the rogue planets,” said Miret-Roig. “We did not know how many to expect and are excited to have found so many.”

The team used the European Southern Observatory’s (ESO) Very Large Telescope, among other facilities, to capitalize on their wide field of view and unique sensitivity.

“We used tens of thousands of wide-field images from ESO facilities, corresponding to hundreds of hours of observations, and literally tens of terabytes of data,” said astrophysicist and project leader Hervé Bouy. The team also used data from the European Space Agency’s Gaia satellite.

The study, published in Nature, asserts that many more rogue planets are waiting to be discovered. “There could be several billion of these free-floating giant planets roaming freely in the Milky Way without a host star,” said Bouy. Some astronomers believe that they were formed from a collapsing gas cloud or may have been spun off by parent stellar systems. These explanations have yet to be confirmed.

New technology in the form of the ESO’s forthcoming Extremely Large Telescope is currently being built in Chile’s Atacama Desert.

The number of FFPs is difficult to calculate because astronomers have not been able to measure their mass. Objects with masses higher than 13 times the mass of Jupiter are probably not planets and were not included in the count. Without values for mass, the researchers had to study the rogue planets’ brightness to arrive at the number of rogues observed. The planets’ brightness, or luminosity, is related to their age. Older planets have cooled and are not as bright. The method gave a count of between 70 and 170.

With tens of thousands of images and about 100 terabytes of information, the team assembled the largest sample of FFPs in a single stellar association, nearly doubling the total number of FFPs known.

The team believes that the number of rogue planets they found cannot be explained merely through the contraction of gas clouds in interstellar space but shows they were shaped near stars and then flung away. By assuming that there are other similar regions where stars are formed, the study suggests that billions of FFPs await discovery, orphaned and tumbling in space.

“The large number of FFPs we found points to dynamical ejection from planetary systems as an important mechanism to their formation, as solely collapse from clouds would not result in so many FFPs. This result implies relatively short timescales, between 3 and 10 million years, for the formation of giant planet systems,” said Miret-Roig.