VIDEO: Dino-Mite: Astonishingly Preserved Dinosaur Egg Was Ready To Hatch Like A Bird 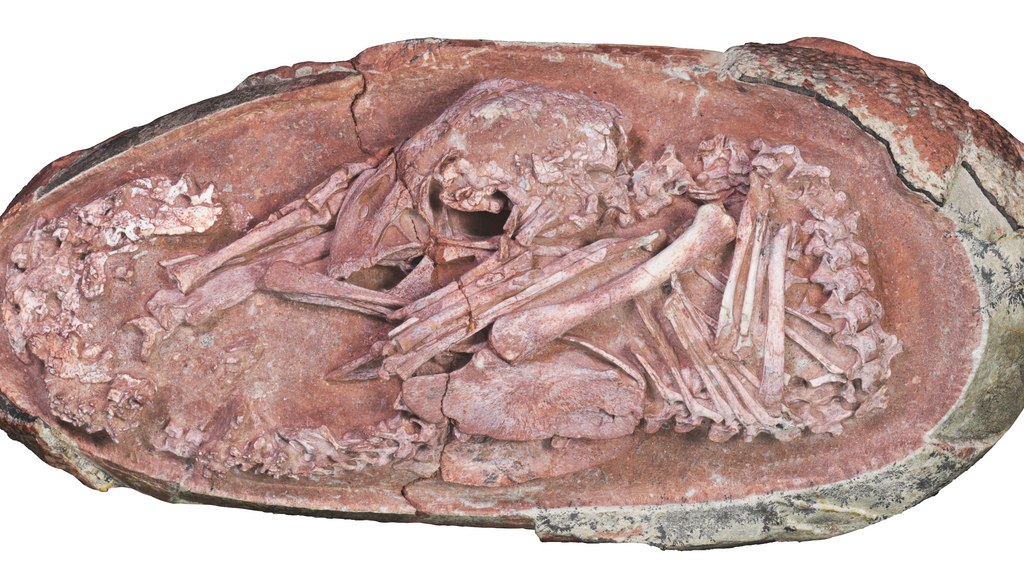 Photo of the oviraptorosaur embryo “Baby Yingliang.” The specimen is one of the best-preserved dinosaur embryos ever reported. (Xing et al, 2021/iScience)

A beautifully preserved dinosaur embryo was found in a fossilized egg millions of years old, yielding a link between the behemoths of 72 million to 66 million years ago and modern birds.

Found in the rock strata of Ganzhou in southern China, “Baby Yingliang” is one of the most complete dinosaur embryos ever discovered. The fossilized creature was in a bird-like posture while close to hatching, with its head positioned below its body, feet at its side and back curled against the broad end of the egg. This posture, called “tucking,” is critical for modern bird embryos and has never been seen before in dinosaurs.

Researchers who published a paper on the egg in iScience contend that tucking, which is controlled by the central nervous system and was once thought to be exclusive to birds, may have started among non-flying theropod dinosaurs.

“This dinosaur embryo inside its egg is one of the most beautiful fossils I have ever seen. This little prenatal dinosaur looks just like a baby bird curled in its egg, which is yet more evidence that many features characteristic of today’s birds first evolved in their dinosaur ancestors,” said researcher Steve Brusatte of the University of Edinburgh.

The embryo is approximately 10 inches long and exquisitely preserved from head to tail. It is contained within an elongated egg that is about 6 inches long.

Joint first author Fion Waisum Ma of the University of Birmingham said that such embryos are not only rare but also mostly incomplete. Because this find is in great condition, Ma said it will help “answer a lot of questions about dinosaur growth and reproduction.” She pointed out that the embryo’s posture resembles that of a chicken embryo in the egg, noting that this may indicate “similar prehatching behaviors.”

“Most known non-avian dinosaur embryos are incomplete with skeletons disarticulated,” said Ma, adding that the team was surprised to see one so beautifully preserved in an egg. “This posture had not been recognized in non-avian dinosaurs before,” Ma said.

Identified as an oviraptorosaur because of its deep, toothless skull, it belongs to a group of flightless feathered theropod dinosaurs, closely related to modern birds, that lived in what is now Asia and North America. While originally thought to be egg eaters, their various beak shapes and body sizes may be evidence of an omnivorous diet. A fossilized skeleton of a related species, for example, showed a reptile skeleton in its belly.

Soon before they hatch, birds take on tucking postures by bending their body and pulling their heads beneath their wings. Embryos that do not tuck face the likelihood of an early death due to unsuccessful hatching.

Comparing Baby Yingliang with theropods, long-necked sauropod dinosaurs and birds, the team proposed that tucking may have evolved among theropods tens or even hundreds of millions of years ago.

Acquired in 2000, the fossils were forgotten in storage until a decade later when they were rediscovered by staff of the Yingliang Stone Nature History Museum in Ganzhou. On seeing the fossils in cross-section, staff members recognized them as dinosaur eggs. Scientists hope that imaging techniques will reveal more secrets.