VIDEO: Croc And Roll Christmas: Santa Leaves Elvis The Crocodile All Shook Up

The jolly fellow hands out festive treats to zoo’s residents. 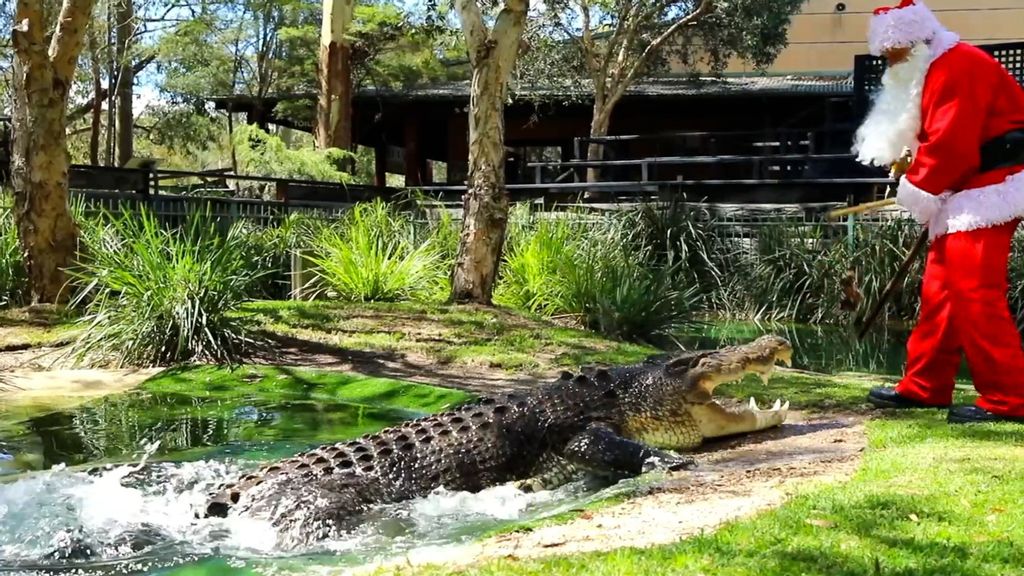 Santa has treats for everyone during the festive season, including the residents of the Australian Reptile Park in Somersby on the Central Coast in New South Wales.

Video shows the jolly fellow delivering the goods to the park’s kangaroos, koalas and crocodiles.

The zoo posted the images online with a hearty “HO HO HO!”

“Although he may have to make his way around the world Christmas Eve, Santa has been spotted at the Australian Reptile Park, dropping in early to get some cuddles with the animals and surprise them with special treats!,” the park said.

“Parking his sleigh outside the park, he made his way inside with his sack full of goodies for all the animals at the Central Coast wildlife park.

“Whether it was the friendly mob of kangaroos to Anna the koala — the animals were all incredibly happy to receive their special gifts! Most notably, Santa was brave enough to take on ‘Elvis.’ the 5-meter [16.4-foot] crocodile as he jumped into his enclosure to feed him a Christmas lunch!”

Video shows Elvis snapping its jaws at Santa as he teases the croc with food on the end of a pole.

Santa is quoted as saying: “I love Australian animals so much! Australia has all sorts of different and dangerous wildlife, I would have spent all day there, but I have so much left I need to finish before Christmas!”

The reptile park said: “Santa noted his time at the Central Coast wildlife sanctuary was his favorite trip so far but would not let his reindeer anywhere near the alligator enclosure. The feisty reptiles chased Santa out of their lagoon after he delivered their present and joked that ‘Mrs. Claus would be proud of all the exercise I have done at the Reptile Park today.’

“After a full day of spending time with the animals and spreading Christmas cheer, Santa bid farewell to the Australian Reptile Park.”

Santa plans to return to Australia later this week with his trusty reindeer.

“He said he would be back in Australia on Christmas Eve, and is so excited to bring gifts to all the little boys and girls of Australia. After all, he feels like the most dangerous job is done!

“The Australian Reptile Park is a hands-on zoo located the natural bush setting of the Central Coast of NSW, only 60 minutes from Sydney or Newcastle. Visitors enjoy live entertaining shows, themed exhibits and interaction with many of the wildlife park’s residents,” the zoo said.