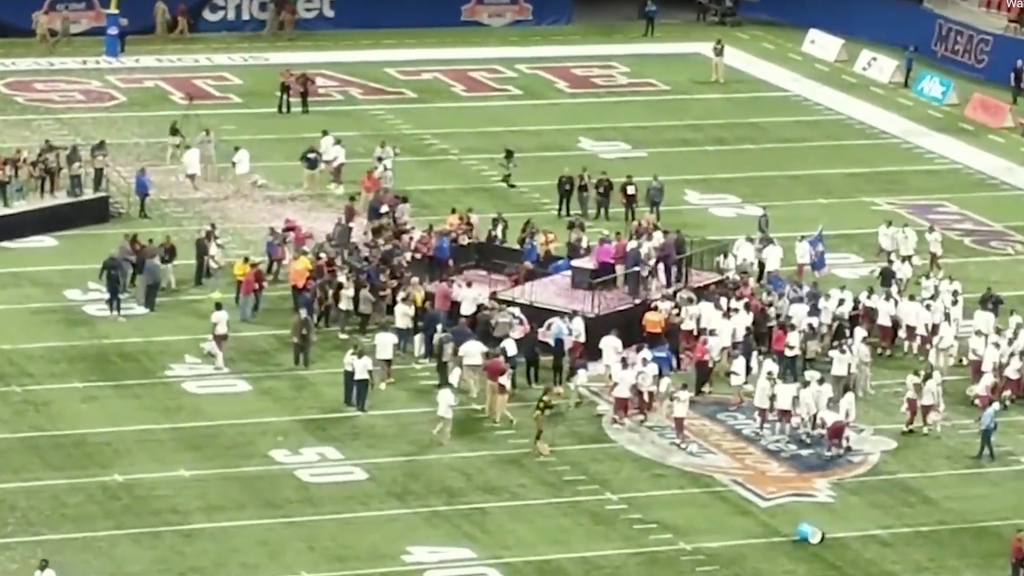 ATLANTA — Jackson State, the Southwestern Athletic Conference football champion, brought the hype of having Deion “Coach Prime” Sanders as its head coach to Atlanta for the sixth edition of the Cricket Celebration Bowl. South Carolina State brought an appreciation for what it meant to simply be there — along with a chip on its shoulder because of what the Bulldogs perceived as a lack of respect from an opponent and fans who felt that it was their rite of passage to win the Black College Football National Championship.

However, when last Saturday’s game was over at Mercedes-Benz Stadium, the better team was clearly evident. A record crowd of 48,653 watched S.C. State drop a hammer on Jackson State’s magic carpet ride of a dream season for a 31-10 win.

Few, if any, college football fans who aren’t aficionados of the Black American national pastime, knew about South Carolina State head coach Buddy Pough. His quiet bravado is trapped inside a folksy Southern gentleman who is a tough-as-nails football coach.

“When you’ve been around 40 years, games tend to get lost,” Pough said. “But this is as big as any I have been a part of.”

The Mid-Eastern Athletic Conference’s longest-tenured coach had been longing for a chance to bring a team to the Black College National Championship game. It was the fifth time in the six-year history of the game that the Historically Black Colleges and Universities representative beat its counterpart from the NCAA Football Championship Series.

Pough recognized he was somewhat of an afterthought to his counterpart, who was riding high after a week of being the center of attention off the field. With his high-profile NFL background, Jackson State’s Sanders was the personality who became bigger than the game. After Sanders signed the nation’s top high school recruit and made his rounds on morning TV sports shows, his persona dwarfed the significance of the game.

However, as the final 10 minutes were playing out, “Coach Prime” found himself cruising around the sidelines on a scooter looking for answers to a game plan that left his team bewildered and his coaching staff frustrated.

“It was really more of us using Jackson State’s game plan against them to beat them because that’s what they’d done most of their games through taking advantage of short fields through turnovers and their return game,” Pough said. “We just wanted to make them drive the field and from there we were waiting for an opportunity. Once the opportunity came, we were able to take advantage of it.”

His Bulldogs were given extra incentive after a series of statements from the other sideline that created a sense of entitlement on the part of Jackson State.

“At first, they said we weren’t going to score 21 points (on them) offensively, so we had to come out and prove them wrong,” said S.C. State defensive back Decobie Durant. “We had a little free time to go around Atlanta. I was in the mall with my teammates, and the people were saying, ‘So ya’ll the team that’s playing against Jackson State.’ Like they had never heard of South Carolina State. So that was big to us because we already knew we were the underdog.”

This was supposed to have been the shining moment when the canonizing of Jackson State’s football program would re-establish its spot as the elite team in HBCU football by winning the mythical national championship. When Tiger fans rolled into Atlanta for the Cricket Wireless Celebration Bowl, there was the sense of being there to watch Sanders fulfill his championship destiny as a coach.

“We were overconfident and felt like they were just going to hand us the game. My hats off to everybody involved for South Carolina State, especially their secondary,” Sanders said. “They’ve got a corner over there [Durant] who should be recommended for the NFL. He should get his shine on. We tried our best and got our butts kicked.”

With all the hype surrounding Sanders’ presence, few gave South Carolina State — whose regular-season record was just 6-5 — much of a chance.

“We weren’t about to come here and just give them the game,” said S.C. State wide receiver Shaquan Davis, who wound up being named offensive player of the game. “We worked too hard to get here and came to give them a fight.”

While Coach Prime was cruising around the sideline from the lavish motor pool of convalescent vehicles (due to his undergoing foot surgery earlier in the fall), his two sons stepped up on a stage where their father gave birth to the legend of Prime Time. Shilo and Shedeur Sanders stepped up for Jackson State (regular-season record: 11-1) to control the game early while they were trying to find their championship legs.

But after Jackson State jumped out to that 7-0 lead, South Carolina State slammed the door. Pough’s blitz packages and disguises in the secondary led to the Bulldogs scoring 24 points over the second and third quarters. Bulldogs quarterback Fields bounced back from a rough start to throw three touchdown passes during that stretch to Davis.

“I just had to play more physical. I wasn’t getting any calls,” Davis said. “They were grabbing, pushing, pulling, so I knew I had to stop complaining and just get more physical with them.”

It was the same with the Bulldogs defense, which kept one of the nation’s most explosive offenses in check.  S.C. State held Jackson St. to a Celebration Bowl record low of 19 yards rushing. Once the Tigers were forced into passing mode, the Bulldogs teed off on Shedeur and punished him while he was trying to make plays outside the pocket. He had two interceptions and was sacked three times by the Bulldogs, who extended a trend in this HBCU postseason classic.

Bottom line: While the SWAC team gets the attention, the MEAC representative has won five of the six Celebration Bowl games.