VIDEO: Fright Christmas: Hero Cops Save Mom, Daughter, Cat And Even The Presents From Home Inferno 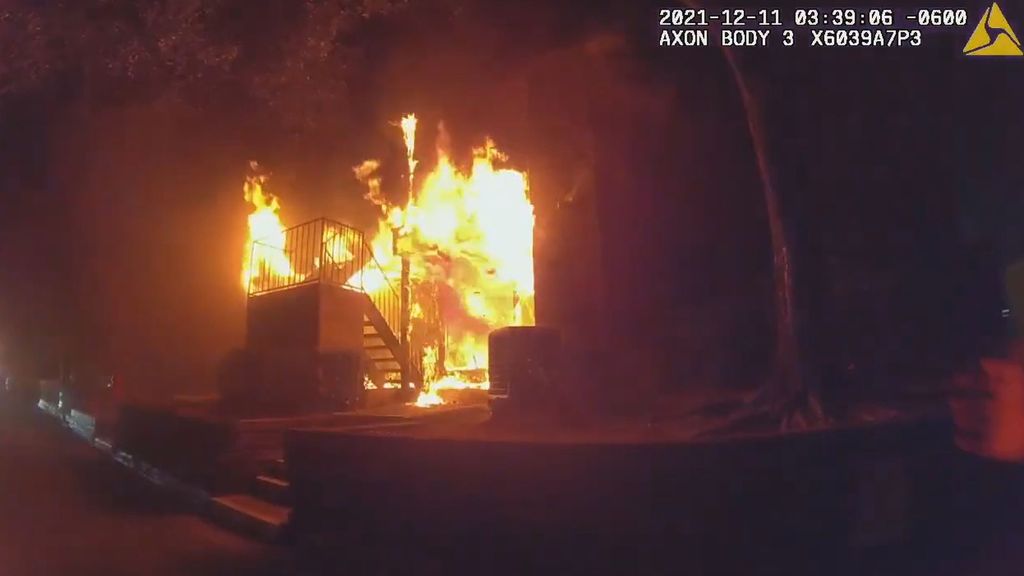 Police in Austin, Texas, rescued a woman and her young daughter from this burning apartment complex on Dec. 11. (Austin Police/Zenger)

The police department in Austin, Texas, has nominated several officers for medals after the officers rescued a woman and her daughter from a fire at an apartment complex on Dec. 11.

Video posted online by the Austin Police Department shows officers reach a 10-year-old girl trapped on a balcony and fire officials using a ladder to help her mother down, as smoke billows and flames fly into the sky from the building.

The officers also managed to save the family’s cat.

Because of the damage done during the holiday season, the officers bought presents for the family, the Austin Police Department said in a message accompanying the video.

“On Dec. 11,… at about 3:36 a.m., Austin Police Department officers responded to a fire at an apartment complex on the 1600 block of East Anderson Lane. One of the 911 callers said she and her 10-year-old daughter were trapped,” the police department said.

“Officer Brent Gray, officer Ana Aguilar, and Sgt. Gilbert all assisted in rescuing the daughter from the balcony, and Austin Fire Department used ladders to help get the mother down.

“Thanks to these officer for their quick actions and dedicated response in rescuing this family, they have been nominated for a Meritorious Service Medals.

Cpl. Chadwick Honaker also assisted at the fire scene and purchased Christmas presents for the family. We are also happy to report that the cat in the apartment was also found safe,” the Austin Police Department said.

The body camera video shows firefighters setting up ladders to safely evacuate the girl’s mother. One of the police officers can be seen helping the firefighters set up a ladder.

Neither the woman nor her daughter were identified.

Several other people were evacuated from the burning apartment building. Some residents were treated for smoke inhalation, authorities said.

The cause of the fire has not yet been determined.

In another incident in which Austin police officers were recognized for their heroism, Officers Eduardo Pineda and Chandler Carrera removed a man from a burning vehicle before it exploded, saving his life on May 24.

“Several 911 calls came in regarding an unconscious man inside of a burning truck with his foot on the gas pedal in the 1000 block of West Stassney Lane. Officers Pineda and Carrera arrived on scene within two minutes of being assigned the call. The truck was close to a nearby apartment building and became fully engulfed with the man still inside,” the Austin Police Department said

“Officers Pineda and Carrera tried to make contact with the man and broke the windows to the fully engulfed truck and pulled the man to safety to receive medical treatment from Austin-Travis County EMS.

“Shortly after pulling the man to safety, the truck exploded. The Austin Fire Department was on scene and was able to put the fire out.”