Nightmarish Arthropleura was nine feet long and lived in an equatorial tropical climate 326 million years ago. 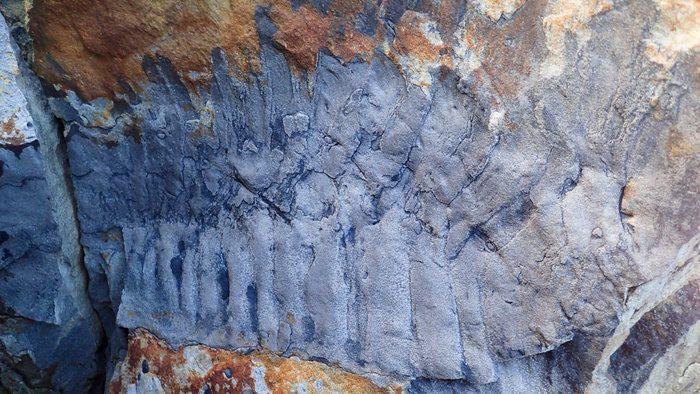 Weighing hundreds of pounds, a block of sandstone from a cliff at Howick Bay in Northumberland, England, revealed a fossilized segment of a giant millipede that lived 326 million years ago. (Neil Davies)

The stuff of nightmares if bought to life, a giant millipede’s fossil was found at a scenic beach in the north of England.

The remains of Arthropleura, the biggest invertebrate ever known to exist, were discovered about 40 miles north of Newcastle in Northumberland. As big as a car, the creature was even bigger than the previous record-holder, the ancient sea scorpion.

A fossil segment about 30 inches long led experts to estimate that the entire millipede was about 9 feet long and weighed more than 100 pounds. “It was an incredibly exciting find, but the fossil is so large it took four of us to carry it up the cliff face,” said Neil Davies of Cambridge University, the lead author of the study published in the Journal of the Geological Society.

In January 2018, the fossil was found in a block of sandstone that had dropped from a cliff overlooking the beach at Howick Bay. “It was a complete fluke of a discovery,” said Davies. “The way the boulder had fallen, it had cracked open and perfectly exposed the fossil, which one of our former students happened to spot when walking by.”

When the immense arthropod existed, Northumberland had a tropical climate and Great Britain was close to the equator. The fossil was dated to about 326 million years ago, in the middle of the Carboniferous Period, which derives its name from the fact that proliferating plants left a layer of organic material that, over time, under heat and pressure, was rendered into coal.

During the Carboniferous Period, 100 million years before the dinosaurs, invertebrates and early amphibians lived on vegetation in an environment lined with creeks and rivers. The Arthropleura fossil was found in what was once a river channel. It is probably a segment of exoskeleton that the millipede molted, which filled with sand, preserving it for eons.

Arthropleura millipedes were common in equatorial regions for about 45 million years, but went extinct during the Permian Period (298.9 million to 251 million years ago). The cause of their extinction is uncertain but may have been due to climate change or competition from reptiles.

The fossil was compared to previous records at Cambridge, revealing new information about the animal’s habitat and evolution. The researchers concluded that it would have lived only in equatorial regions. While experts in the past had theorized that it lived in the swamps that ultimately yielded coal, the Arthropleura specimen shows that it lived in open woodlands near the coast.

Arthropleura fossils have otherwise been found only in Germany, albeit much smaller specimens than the Howick Bay one. “Finding these giant millipede fossils is rare because once they died, their bodies tend to disarticulate, so it’s likely that the fossil is a molted carapace that the animal shed as it grew,” said Davies. “We have not yet found a fossilized head, so it’s difficult to know everything about them,” he added.

While its jumbo size prompted theories that Arthropleura lived in an oxygen-rich environment during the late Carboniferous and Permian periods, the newly discovered relic was found in rock laid down before this peak. This shows that oxygen cannot be the only explanation for its size.

Its diet may have played a role. “While we can’t know for sure what they ate, there were plenty of nutritious nuts and seeds available in the leaf litter at the time, and they may even have been predators that fed off other invertebrates and even small vertebrates such as amphibians,” Davies said.