VIDEO: Steer Stupidity: Police-Chase Driver Leaped Into Back Seat And Pretended To Be Passenger

Teen, who had been rammed off the road after a white-knuckle 80 mph chase, tried to claim that the driver had run off.
By Lee Bullen December 20, 2021
Facebook
Twitter
Linkedin
Email 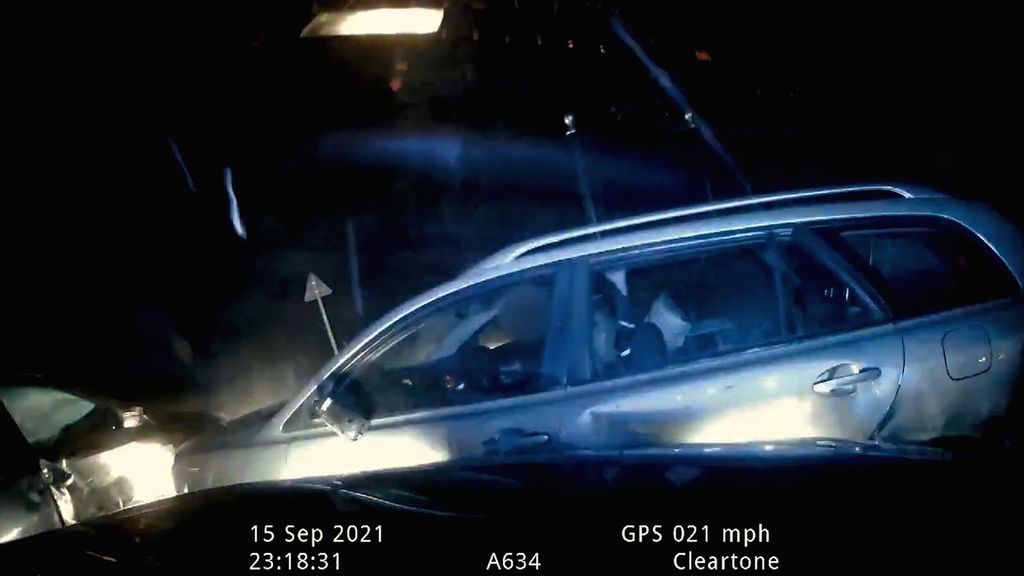 A teen driver in England who led police on a wild car chase — and then tried to pretend he wasn’t the driver of the vehicle being pursued — has been sentenced to jail. The pursuit, which ran through three Nottinghamshire villages and ended when two police cars rammed the fleeing car, took place in September, with the driver and his passengers being sentenced in a local court last week.

Nottinghamshire Police shared video of the chase on social media on Dec. 20, along with an account of the chase and its end.

The suspect, Bill Nicholson, reportedly hit speeds of over 80 mph while racing through the villages of Ranby, Barnby Moor and Blyth with two passengers on board.

“In a hair-raising display of dangerous driving lasting six minutes, the 18-year-old drove around a blind bend on the wrong side of the road, sped through a red light, took a roundabout the wrong way and nearly slammed into a pedestrian,” police said. “The disqualified driver also rammed into two police cars, causing significant damage to both vehicles.”

The suspect was stopped when the pair of police cars managed to box his car in.

“Anxious to avoid arrest, he jumped into the back seat to give the impression he was a passenger and that the driver had fled. But officers saw his deceitful maneuver, which was also captured on police dash-cam footage,” police said.

Nicholson was arrested and charged with dangerous driving, driving while disqualified and driving without insurance.

He subsequently pleaded guilty to the offenses at Nottingham Crown Court and was sentenced to nine months in prison, suspended for 18 months, and banned from driving for 15 months. “A judge also ordered him to complete a thinking-skills program and 20 rehabilitation days,” authorities said.

Nicholson was also made subject of a three-month tagged curfew order. It was not known if Nicholson’s passengers faced any charges.

“This was, without doubt, the worst standard of driving I’ve ever witnessed in my 17 years as a police officer,” patrolman James McClintock said. “Nicholson took many, many risks driving how he did and traveling at such speeds, and it was pure luck that no one was hurt. I am just thankful this was late at night when the roads were slightly quieter.

“It’s a reminder to anyone who tries to escape officers that we are highly trained tactical pursuit drivers and when there’s a team of us following them, it’s only a matter of time before their luck runs out.”