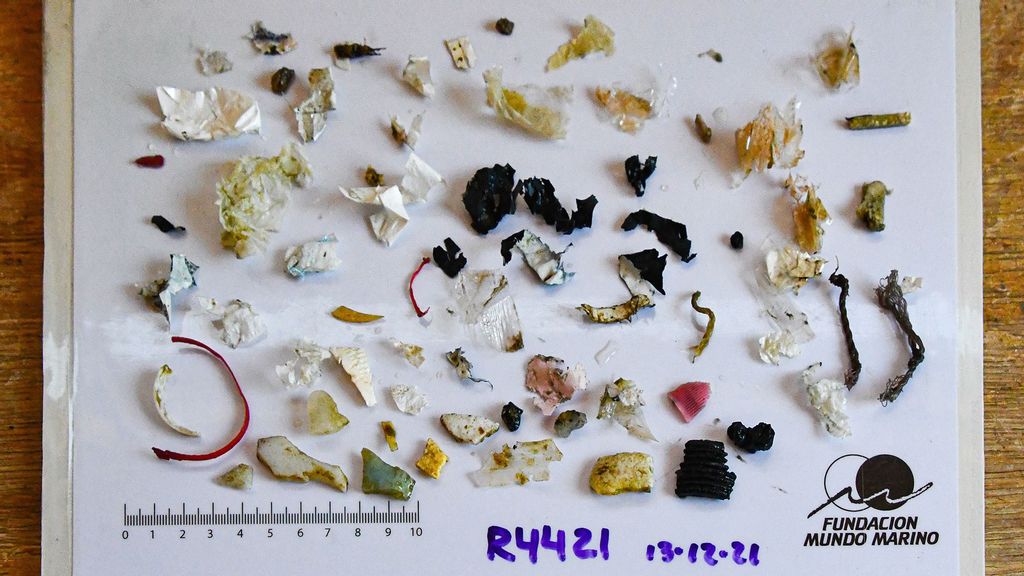 A rescued juvenile green turtle defecated more than 10 types of plastics after it was rescued in San Clemente del Tuyu, Argentina, this month. (Mundo Marino Foundation/Zenger)

A juvenile green turtle rescued from a fishing net defecated more than 10 types of plastic, according to the Mundo Marino Foundation in Argentina.

The turtle was taken to the foundation’s rescue and rehabilitation center in San Clemente del Tuyúon Dec. 13.

The 14-inch-long turtle was rescued by a man after it became entangled in his fishing net.

Though it appeared to be in good health when it arrived at the center, the turtle began to defecate an alarming amount of man-made waste, among which the plastic items were found, including lids, nets, sachets, seals, and cellophane. Other unidentified plastics were also found in the turtle’s excrement.

As of Dec. 18, the foundation said, the turtle had defecated 0.6 ounces of plastic and still had foreign objects in its body.

“We observed that it still had foreign bodies both in its stomach and in the final part of its digestive tract, so it will probably continue expelling garbage in the coming days,” veterinarian Mauro Pergazere said.

X-rays and blood tests from the turtle revealed that it was dehydrated and had a high white blood cell count. “The latter may be its immune system’s reaction to the large number of foreign bodies it had and still has inside,” Pergazere said.

“It will continue under observation, because given the sharpness of the objects it expelled, we cannot rule out that they may have generated internal injuries.

“For now, the animal is showing a good attitude and will be closely watched. We hope in the next few weeks that it will be able to be discharged and returned to the sea.”

The Mundo Marino Foundation has been looking after sick, oil-coated or stranded birds and marine animals since 1987.

“The vulnerability of sea turtles to human impact has been widely documented globally and also in our country,” the foundation’s website says. “The Mundo Marino Foundation — between the year 1995-2013 — has registered 279 specimens of sea turtles.

Of the animals admitted alive to the foundation’s rescue and rehabilitation center, the website says, 84 percent were rehabilitated and reintroduced, and the remaining 16 percent died of hypothermia, dehydration and impaction of the digestive tract as a result of the ingestion of plastic materials.

“Knowing the situation of the sea turtle populations in these latitudes is essential to specify effective conservation strategies. The task of the rehabilitation centers also offers a valuable opportunity to learn about their biological and ecological characteristics and the various conditions to which these reptiles are susceptible, constituting an important tool for their conservation.”

The green turtle has a range that extends throughout tropical and subtropical seas around the world. The species is listed as  “endangered” on the International Union for Conservation of Nature’s Red List of Threatened Species.