Scientists Test ‘Rainforest Under Glass’ For Stress Reactions To Drought

The microbes in soil and tree roots play a role in protecting rainforests during drought, a unique study has found. 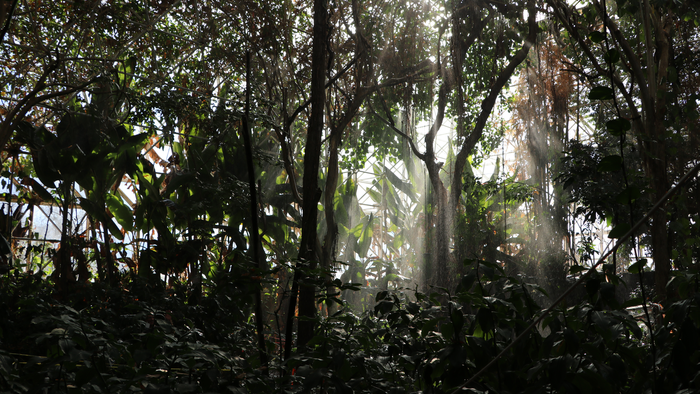 An unparalleled experiment at the University of Arizona's Biosphere 2 forced the rainforest under glass through a controlled drought and recovery to paint a clearer picture of how global climate change will affect Earth’s ecosystems. (Rosemary Brandt)

A unique rainforest grown under glass in Arizona to test drought and recovery conditions in a controlled environment is offering insights into how climate change impacts ecosystems across the world.

Scientists subjected the world’s only enclosed rainforest — located at Biosphere 2 at the University of Arizona — to a drought. The glass enclosure, covering roughly 3 acres of land, houses 90 plant species.

“The forest was, in some ways, surprisingly resilient to the drought,” said Laura Meredith of the university’s College of Agriculture and Life Sciences, who co-authored the study published in the journal Science.

Researchers found that the extreme drought conditions caused a 70 percent drop in the forest’s carbon storage, even while soil interactions and water-use strategies supported its overall stability.

The experiment was called Water, Atmosphere and Life Dynamics, or WALD, which is also German for “forest.” Scientists captured minute data during the drought and when moisture returned. Two miles of tubing and more than 100 sensors simultaneously collected data on carbon pools in the atmosphere and vegetation, as well as microbiome and deep-water soil processes.

“We used stable isotopes to trace the movement of carbon and water through the ecosystem under normal conditions and severe drought, which revealed surprising plant-ecosystem interactions,” Meredith said.

Individual plants did not respond to the water shortage equally. “Some were highly drought sensitive and quickly slowed their critical carbon and water cycling to play it safe,” Meredith said, “while others were more tolerant of [the] drought and maintained their function even under more risky drought conditions.”

While the researchers assumed these trees would immediately seek out water in the deep soil, they observed that drought-sensitive trees initially reduced their water consumption and tapped into deep-soil water reserves only under severe drought conditions.

For their part, the large drought-tolerant trees kept their leaves longer, providing a canopy that shaded the undergrowth and soil from further dehydration. The team believes that this diversity of responses helps maintain efficient carbon- and water-cycling functions in the ecosystem.

While stressed by the drought, the biosphere forest showed significantly reduced carbon storage. However, plants released more volatile organic compounds (VOCs), which enable communication between plants and soil microbes. The experiment showed an increase in VOCs such as isoprene, hexanal and monoterpenes. Monoterpenes promote cloud condensation and rain formation, serving to protect the forest.

Soil microbes captured some of these compounds, limiting the amount released into the atmosphere. “This counterbalancing role of soil microbes to plant VOC emissions persisted, even under severe drought, indicating that we need to take the role of microbial activity on atmospheric processes better into account,” Meredith said.

The research team will now look at soil and root microbes to determine their involvement in water- and carbon-cycling, while recording their metabolism and genomic profiles.

“Experimental ecosystems, like what we have at Biosphere 2, allow researchers to understand the holistic response of an entire ecosystem to stress,” Meredith said. “As we work to understand and predict ecosystem function in response to global change, we have to consider plant functional groups and their interactions with soils and the atmosphere, in both observational and modeling studies.”