Deity was worshipped as the patron of arts and flowers, including the hallucinogens used in Aztec rituals. 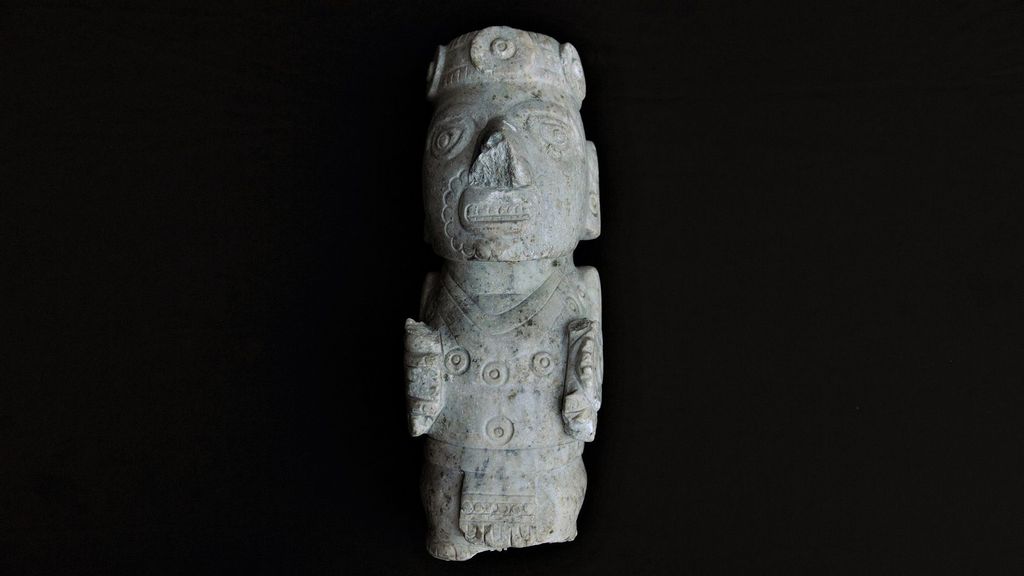 The marble statue of the Aztec god of art, dance and games has gone on display in Mexico City. (Mauricio Marat, National Institute of Anthropology and History/Zenger)

An ancient marble statue of the Aztec god of art, dance and games has gone on display in Mexico City.

The statue, which was uncovered in the city’s Guerrero neighborhood in 2019, is being shown at the Museo del Templo Mayor (Main Temple Museum) in the heart of the Mexican capital.

The marble statue, which depicts the god Macuilxochitl-Xochipilli, is 14.4 inches tall, weighs about 11 pounds and was reportedly part of the “last stage” of the Aztec capital city Tenochtitlan, which became Mexico City after the European conquest of the Aztec Empire.

Macuilxochitl-Xochipilli is the deity of art, dance and games, as well as of flowers, according to Aztec mythology.

“The general director of INAH, Diego Prieto Hernandez and the Secretary of Culture of Mexico City, Vanessa Bohorquez Lopez, inaugurated the exhibition in the Archeological Zone of the Templo Mayor,” the National Institute of Anthropology and History, known by its Spanish acronym INAH, said in a statement.

“This is the first time that this archeological piece has been unveiled,” the institute said.

“After being hidden for five centuries, this Xochipilli of the great Tenochtitlan is revealed to us here, not only to contemplate the ecstasy that characterizes this deity, but to recognize him as the bearer of good omens, splendid dawns, beautiful dances and poetry, of the happiness that we all deserve and long for,” Prieto Hernandez said.

“Two years ago, Mexico City revealed one more of its secrets, another buried mirror,” Bohorquez Lopez said. “The explorations that found this piece in the former neighborhood of Cuepopan reveal the wealth of heritage that continues to give us deep roots, the result of millennia of development of the original civilization, of the women and men of the ancient Cemanahuac.”

The director of the Templo Mayor Museum, Patricia Ledesma Bouchan, said the exhibition of the Xochipilli-Macuilxochitl sculpture will continue until Feb. 14, 2022, in the lobby of the new entrance to the museum. She says it will later be part of the museum’s permanent collection.

On July 17, 2019, archeologists noticed the object that, “except for the loss of a fragment of its nose, was in perfect condition.”

The institute said the deity appears to be seated and wearing a loincloth, as well as jewels “typical of the nobility.” The statue, according to the experts, appears to be wearing a diadem, “earmuffs” and a necklace.

The experts also said the statue seems to hold in its right hand an omichicahuaztli, which is a musical instrument made with bone.

The statue also appears to have shield called a chimalli in its left hand.

“Xochipilli and Macuilxochitl are closely related gods, so the sculpture shows attributes of the former, such as the headdress, the necklace with chalchihuites and the chimalli. Of the second divinity, the mouth painting that resembles a flower stands out, but in reality, it represents the palm of a hand,” the statement said.

“Macuilxochitl-Xochipilli, whose calendrical name is 5-Flor, was linked with joy, music and song, as well as with the rising sun, the dawn sun, the child sun.”

The deity “had an important role” at specific events during which nobles “participated in banquets, dances and hunts and paid him honors.”