While the disparate effects of pollution are well-known to minority communities, new data underscores a problem that still exists. 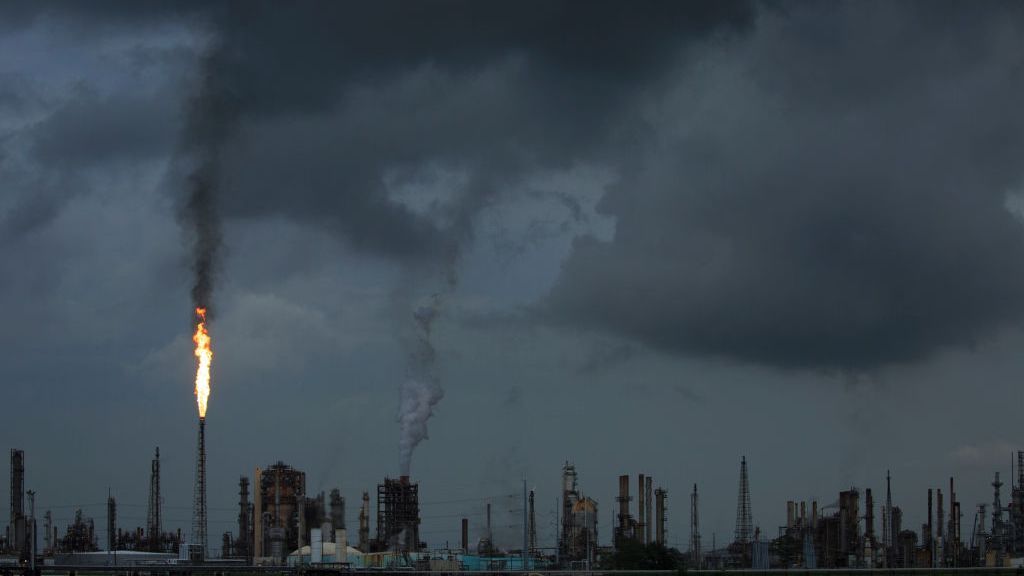 A gas flare from the Shell Chemical LP petroleum refinery illuminates the sky on August 21, 2019, in Norco, Louisiana. Located about 10 miles up the Mississippi River from New Orleans, the plant agreed to install $10 million in pollution monitoring and control equipment in 2018 to settle allegations that flares used to burn off emissions were operating in violation of the Clean Air Act. (Drew Angerer/Getty Images)

Despite the general improvement in air pollution in the United States since 1990, racial and ethnic minorities remain more likely to be exposed to six major air pollutants than white Americans, according to a new study.

Air pollution has been linked to cancer, heart disease and cognitive decline, with varying effects depending on the source of the pollution. Researchers at the University of Washington investigated exposure to those air pollutants by looking at census data collected in 1990, 2000 and 2010. When they examined people’s racial and ethnic background, income and place of residence, they found that not everyone is equally exposed to poor quality air.

Even though overall air pollution levels have dropped, the study points out that regardless of income, people of color are more likely to be exposed to dangerous air pollution. “This is the first time anyone has looked comprehensively at all these main pollutants and watched how they vary over time and space,” said Julian Marshal of the University of Washington, who co-authored the study published in Environmental Health Perspectives.

Marshall said that while every community is unique, there are factors that crop up repeatedly in the United States. Going state by state, there’s no place where there are not any environmental justice concerns, he said.

In previous work, Marshall and fellow researchers had shown by researching U.S. census data for 2000 and 2010 that Americans of color faced higher concentrations of noxious nitrogen dioxide gas (NO2), which is produced by vehicles fueled by gasoline and diesel.

For the most recent study, the team investigated ozone (O3), sulfur dioxide (SO2) and carbon monoxide (CO), as well as particulate matter such as dust, pollen and that produced by vehicles. The team also included data from 1990, which was when the Clean Air Act was amended to address air pollution and emissions.

“There have been so many improvements,” said study co-author Jiawen Liu. “But we still see these disparities persist, even after two decades.”

The team incorporated multiple data sources, such as satellites and Environmental Protection Agency (EPA) monitoring stations. The figures were compared in relation to demographic groups tagged by the U.S. Census Bureau — Asian, black, Hispanic and white — in order to estimate the level of pollution exposure for each group in all the U.S. states and Washington, D.C.

“Relative disparities allow us to compare across pollutants,” Liu said. By dividing by the average, “it gives you a basis for how big or small that exposure disparity is.”

While disparities were different according to the location, across all the pollutants and the years covered, racial and ethnic minorities showed the highest levels of exposure. Despite a general improvement in air quality, the disparity was still there in 2010.

Liu cautioned that the data may not be good at getting a snapshot of unusual pollution events in some places. “We’re trying to catch people’s attention and show what is happening now. We hope this information will motivate change,” Liu said.

Researcher Marshall said scientists should document racial and ethnic disparities in air pollution exposure. “These communities have been saying this message for a long time. And it’s important to bring humility to our research,” he said.

One example of delayed environmental justice was finally put to rest in 2018 after 26 years in Flint, Michigan. In 1992, Catholic priest Phil Schmitter filed a federal discrimination case over concerns that Michigan’s Department of Environmental Quality and the EPA had disregarded the dangers posed by a biomass incinerator and wood-burning power plant spewing toxic lead, arsenic and other pollutants next to a school and into the air in his neighborhood, whose residents were largely black and low-income.

The longest-running environmental discrimination case in U.S. history came to an end on Jan. 19, 2017 — the final day President Barack Obama was in office — when the EPA closed its probe into the complaint, having judged that the local black community had been treated unfavorably.