Suspect pretended to hide in a stairwell, which police chided as a “Looney Tunes” move.
By Joseph Golder December 17, 2021
Facebook
Twitter
Linkedin
Email 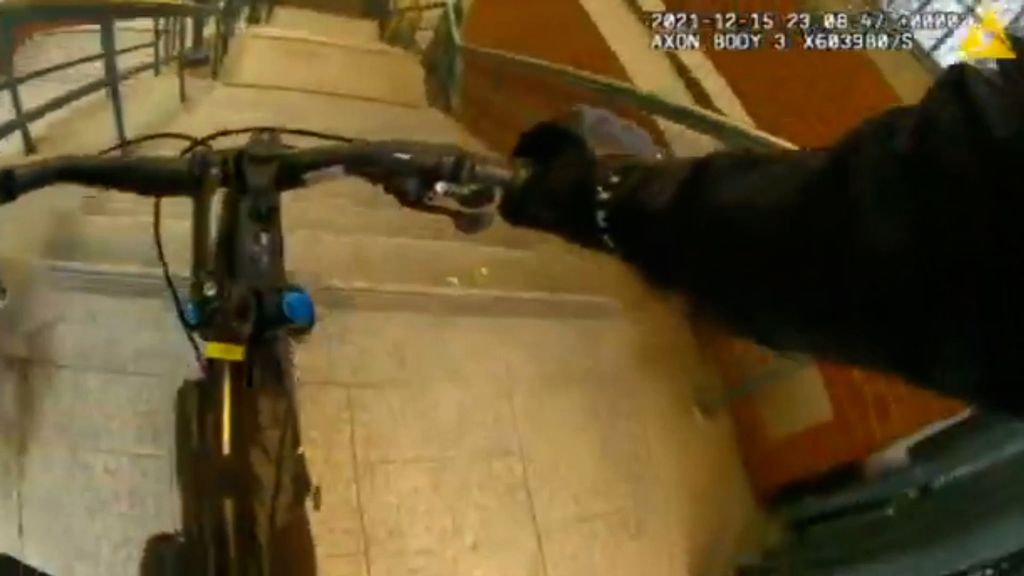 An officer on a BMX bike chases a suspected drug dealer through the Pioneer Square bus tunnel in Seattle, Washington, on Dec. 15. (Seattle Police Department/Zenger)

A 23-year-old man is facing firearms and narcotics charges after police officers on BMX bikes chased him down the stairs in a bus tunnel and arrested him in the state of Washington.

The man, who was not identified, allegedly was in possession of a handgun after he led officers on a foot pursuit through the Pioneer Square bus tunnel in Seattle, Detective Patrick Michaud of the Seattle Police Department said in a report posted online.

Video released by the police shows the arrest of the suspected drug dealer on Dec. 15.

The police body camera footage shows two police officers chasing the suspect, who runs downstairs at the bus station. One officer’s bodycam shows the ride down the stairs on his bicycle.

The bicycle skids after reaching the lower level and the police officer falls over, before quickly getting back to his feet and chasing the suspect across the station. He eventually finds the suspect hiding in a stairway.

The video ends as the police officer points his gun at the suspect and orders him to get on the ground.

The footage was shared online by the Seattle Police Department.

“When officers attempted to stop the man, he ran into the nearby Pioneer Square transit tunnel. In a move reminiscent of the 1983 Nicole Kidman classic, ”BMX Bandits,” police said, “the officers rode their bikes down the stairs after the man.

“The suspect dropped a stolen handgun and continued to flee with the officers in pursuit. Officers, wearing their bike shoes, chased the suspect through the bus tunnel and onto a back stairwell. There, the suspect, in a move reminiscent of ”Looney Tunes,” attempted to bamboozle the officers by taking a seat on the stairs and directing them upward. The officers were not fooled,” police said.

The officers took the suspect into custody without further incident.

Police said they booked the man into King County Jail for firearms and narcotics charges.

A new state law on drug possession was signed by Gov. Jay R. Inslee in May. The new law reclassifies possession of controlled substances, including cocaine, heroin and methamphetamine, as a misdemeanor punishable by up to 90 days in jail. The previous law, which was struck down by the Washington State Supreme Court, had made possession a felony.

“It moves the system from responding to possession as a felony to focusing on the behavioral health response, which is a much more appropriate and successful way to address the needs that underlie drug abuse,” the governor said when he signed the new law.