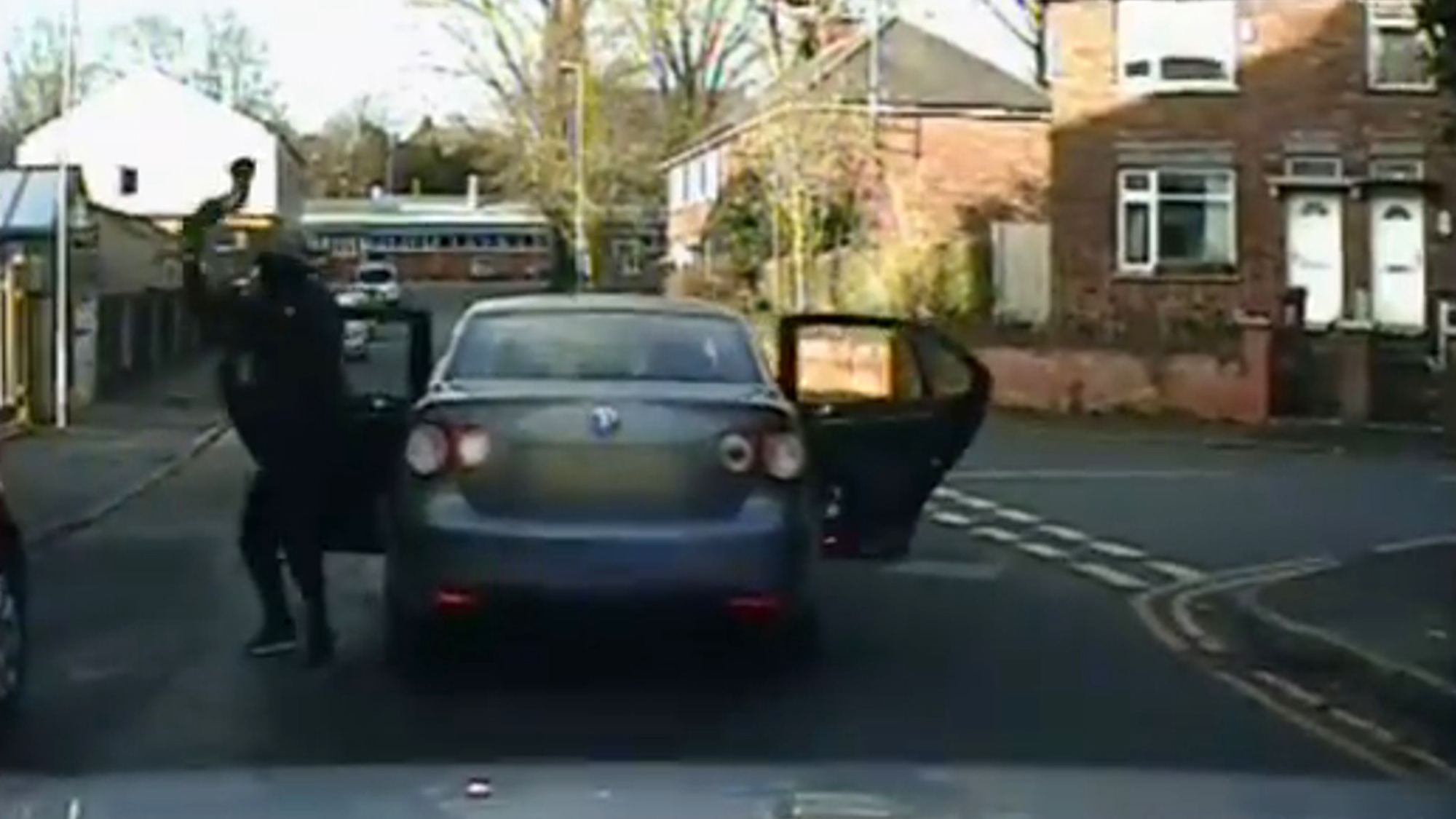 A catalytic converter thief (left) in Manchester, England, prepares to throw some type of heavy tool at the windshield of a police car that was chasing the man and others in the VW seen here. The tool bounced off the car, and did not shatter the windshield. (Greater Manchester Police/Zenger)

A catalytic converter thief threw a power tool at a patrol car’s windshield during a car chase through the streets of Manchester, England, on Dec. 15.

The police are appealing for information to help them catch the suspected thieves after they tried ramming a police car and threw a power tool (possibly a drill) at the windshield of the officer’s vehicle.

“One of our officers followed a suspicious Volkswagen Jetta on Wednesday afternoon after a series of recent reports of catalytic converter thefts in the Manchester, Salford, Bury, Tameside, Stockport, Oldham and Rochdale areas of Greater Manchester,” the Greater Manchester Police said in a statement.

“The car — believed to be on cloned [fake] plates — is said to have been involved in these incidents of late, during which offenders are understood to have been armed with weapons.”

“During the pursuit, the driver of the VW Jetta tried to ram the police car while a passenger wearing a balaclava [ski mask] threw a heavy metallic object — believed to be a power tool — toward the officer’s vehicle in an unsuccessful attempt to disable it.”

After a 10-minute pursuit, the offenders abandoned their vehicle in Rochdale, escaping police on foot.

“No arrests have been made and investigators are continuing to probe the series of thefts that have featured offenders brazenly stealing convertors in broad daylight, whilst holding weapons and wearing masks, to intimidate and threaten victims,” police said.

Why are stolen catalytic converters in such high demand?

In the U.S., some states are trying to deter such theft with laws that require scrap dealers to document the seller’s ID before accepting the metal, or document vehicle descriptions and pictures of the pieces brought in by the scrap seller, the Allstate report notes.

Speaking of the U.S., it’s had its own instances of tools being hurled at police. In October, two suspected thieves in Florida threw a variety of tools at the police who were pursuing them. The driver climbed through a window into the bed of the truck while the passenger took over driving the stolen vehicle. He continued to throw tools from the bed of the truck at law enforcement, including a large blue toolbox, a stamping machine and a sledgehammer. In this case, the tool throwers were apprehended at the end of their chase.