VIDEO: Haven’t I Scene You Before? Sexual Predator Jailed After Victim Spots Him At Crime Scene

Serial attacker gets prison time after being caught cycling by where one of his assaults took place.
By Lee Bullen December 17, 2021
Facebook
Twitter
Linkedin
Email 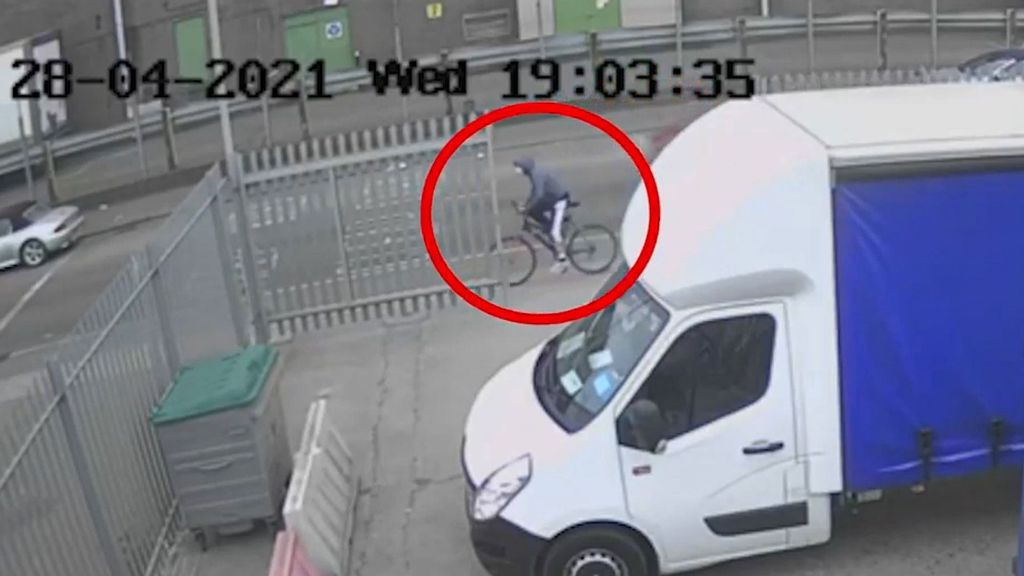 A sexual predator (in red circle) is seen here bicycling past the scene of one of his crimes in Essex, England, while one of his victims was there with police. (Essex Police/Zenger)

A sexual predator in the U.K. has been jailed after he was caught on film returning to the scene of one of his crimes while one of his victims was there with the police.

In the video, which was taken in late April, a man subsequently identified as Domenico Anselmo is first seen when his head pops out from behind a police truck on the scene, as he apparently tries to figure out what was going on. Then, he gets on his bike and cycles out of the scene to the left — only to quickly recross the scene in the opposite direction, evidently realizing he has been spotted by police.

Anselmo, 27, was sentenced on Dec. 16 to four years in prison in connection with a series of sexual offenses in western Essex and across the border into Hertfordshire.

The sentencing comes on the heels of him pleading guilty in August to 17 offenses committed between January 2017 and May 2021 on paths along the River Lea Anselmo subjected a total of 13 women to physical assaults, indecent exposure, or both, on several occasions.

“The investigation team asked the women Anselmo targeted to accompany officers to the location of each offense, to install additional CCTV cameras in the area,” a statement from Essex Police said. “One of the women had been walking home along Dobbs Weir Road in July 2020 when she was assaulted.”

Unexpectedly, Anselmo returned to the scene just as she finished showing officers where she had been attacked.

“It had been a long time since the incident happened to me, so I’d honestly given up on the possibility of him being identified,” the victim said. “When the officers asked me to show them exactly where it happened, I didn’t really think anything would come of it.

“Afterward, as I turned round to wave goodbye, I saw this man riding a bike heading toward me. I thought to myself, ‘I recognize that bike,’ and that’s when the realization suddenly set in.

“I felt really panicked as I didn’t want to walk back past him to alert the officers, but luckily one of them caught my eye and must have seen my distress.

“They came over to ask what was wrong and that’s when I told them ‘that’s him’!

“Even now, I still find it completely unbelievable that it happened when it happened… It was perfect timing.”

Police agree. “Anselmo was arrested by officers from our West Disruptor team, who had also been in the area conducting proactive plain-clothed patrols … The clothing he was wearing that day matched those seen in CCTV footage showing another of his offenses.”

“I’m really proud that the work of my team has helped put Anselmo behind bars, but most of all, I’m really pleased that justice has been delivered for all the 13 women he assaulted,” said investigating officer Clair Ward. “It’s difficult to put into words just how much courage and determination they’ve shown over the past four years, and I’m grateful for their unrelenting support throughout our investigation.”

«Previous Post
Ah Sheet! You Got Me: Woman Found In Fridge After Tying Bed Linen From Window To Fool Cops»Next Post
Care Home Of Horrors: Staff Tortured Patients And Doped Them Up On Drugs, Police Say